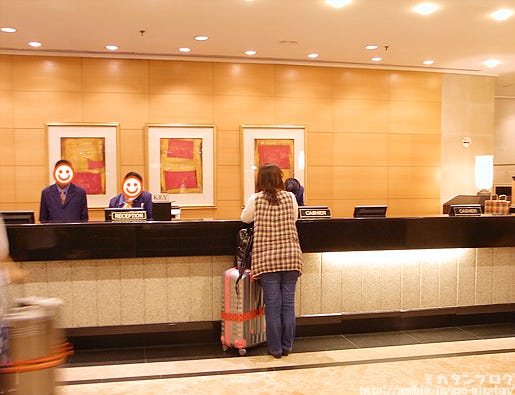 It took just less than eight hours to fly here from Japan. The time-zone is one hour different from Japan. It was also incredibly hot!!

The air is very humid, so it was very similar to the heat in Japan, but the strong aircon inside the buildings made it seem even warmer outside than normal. 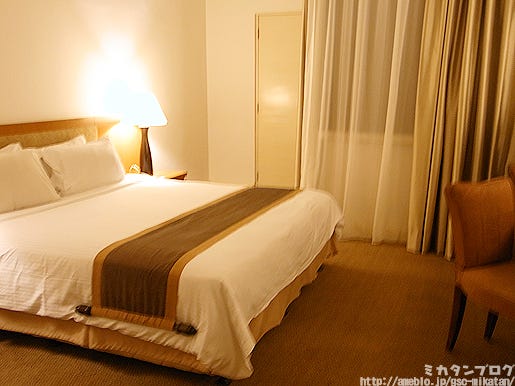 My room for the next four days!

I got a corner room, yay!  Not to mention it had a load of space, there was an internet connection and I had a great view! I couldn’t have asked for a better room! 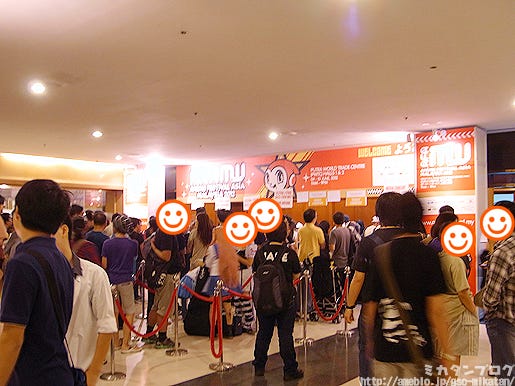 After one day of preparation…

AFA is an acronym for ‘ANIME FESTIVAL ASIA’!

The day of preparation caused a lot of trouble with packages unable to get here on time, and road congestion causing delays for the GT team… but if I was to write on that I get the feeling it’ll end up being way too long, so I’ll have to drop it for now. :P Luckily, all the prototypes managed to arrive safely!

AFA was held at a place called ‘PWTC’! It looked pretty much like a shopping mall, but there were cosplayers walking around as if it were normal. Whenever I go overseas for events, I’m always glad to see things like this! 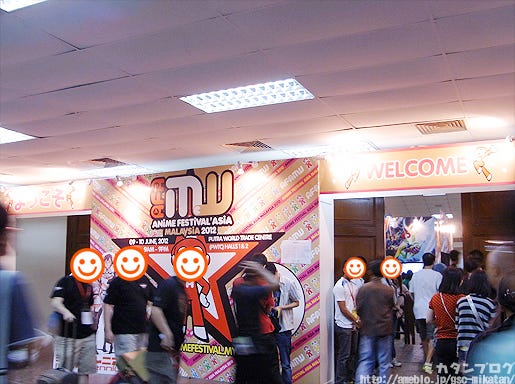 Here we have the entrance!

From the main building you take a passage down to a smaller annex. Just like at Animelo Summer Live there was a fine mist spraying down from the ceiling. Anyway, let’s head inside… 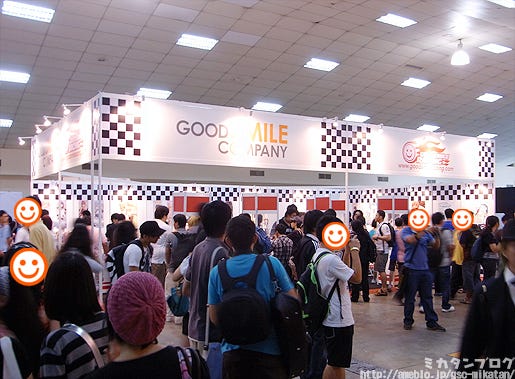 The Good Smile booth was right near the entrance! Normally at events like this I have a hard time finding our booth…

This time around the booth was decorated with a racing theme! 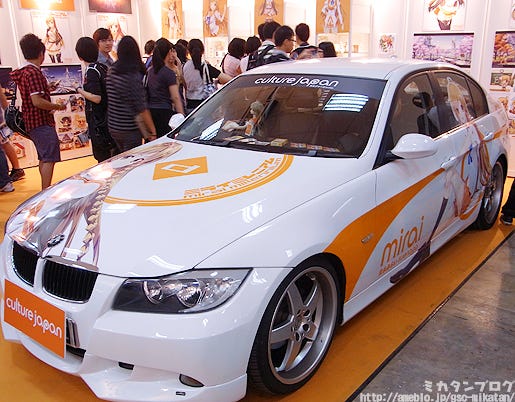 Danny Choo’s booth was opposite the GSC booth… 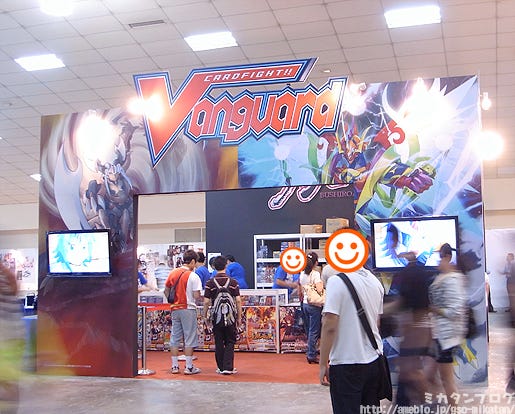 with Bushiroad next to us!! (ﾟ∀ﾟ)

Being close by to some of the booths that I know back from Japan was very reassuring. ^^ Let’s take a peek into Bushiroad’s booth… 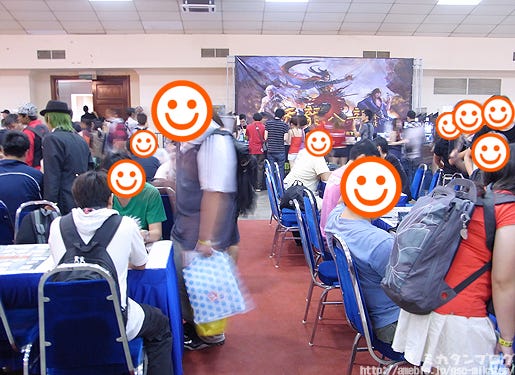 By the evening, there were so many people watching that the entire booth was surrounded! But Good Smile mustn’t lose!! :P 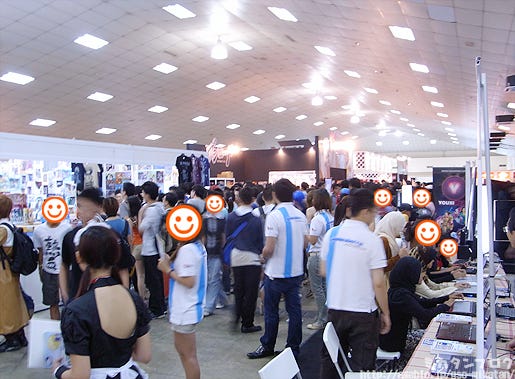 A photo from the pathway!

At the far end of the photo you can see the black and white chequered booth which is GSC, and on the left you can see parts of orange which are Danny’s booth! As an extra bonus we have a lovely looking back of a maid at the front of the photo! :P 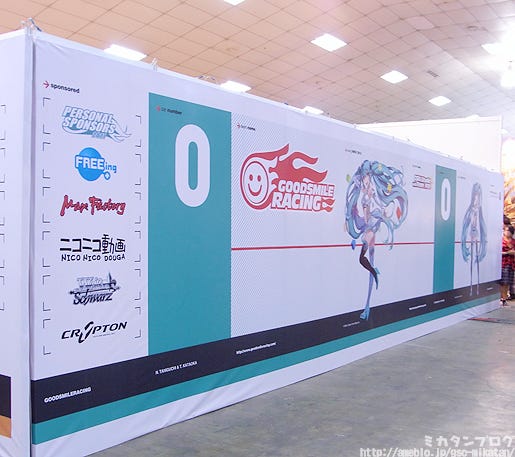 The back of the GSC booth!

The same day as AFA, a GT race was being held at Sepang, right here in Malaysia – So the pit was recreated at AFA to celebrate!

That also explains why we decided to make the booth’s design have racing theme! The image above is Car #0’s pit – you can see Racing Miku looking absolutely lovely! 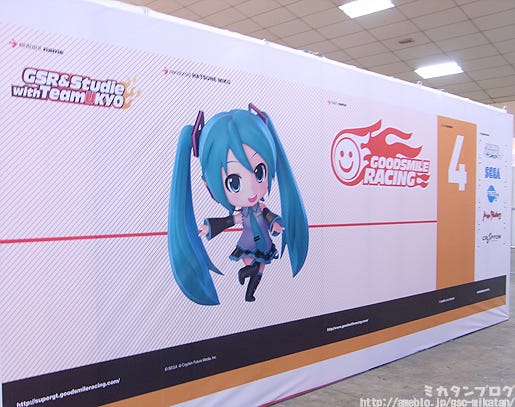 The project mirai Miku Car! Isn’t she adorable!! Obviously I’m supporting #0, but I have to say I really want the mirai car to do well too!! 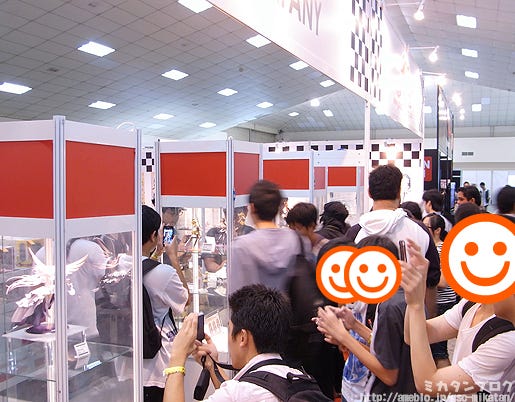 It makes me so happy to see everyone taking photos of our figures! Thanks everyone!! But what was the main attraction of the GSC booth at AFA…? 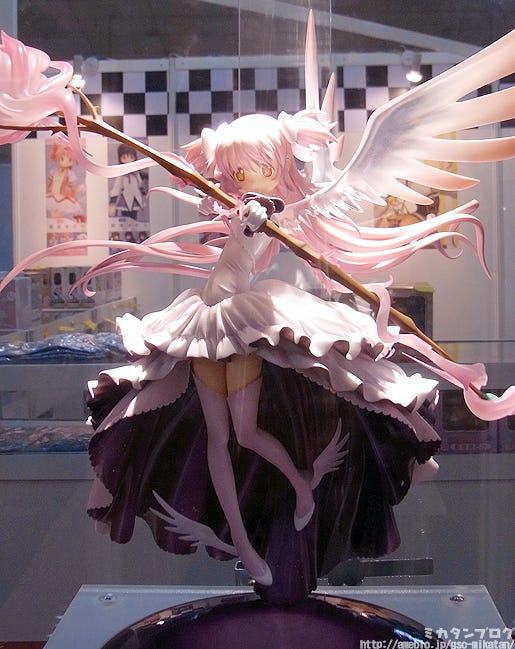 It can only be Ultimate Madoka!

The case  we were using had lights in the top which worked very nicely for Madoka – the light on her wings and bow looks absolutely fantastic! 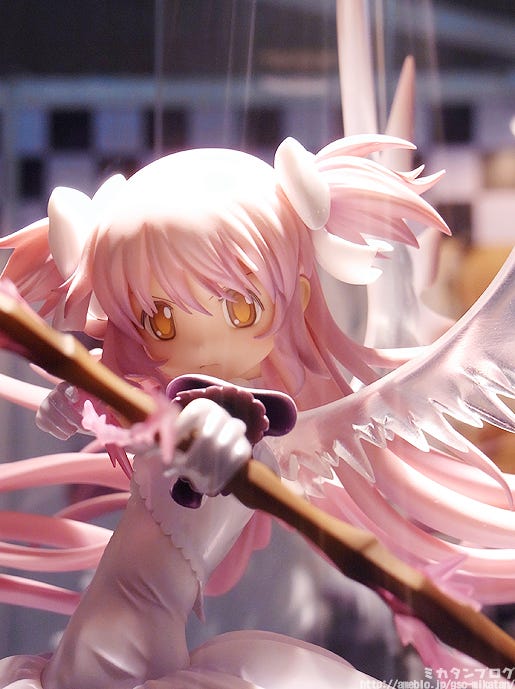 The light shining up from the heavens only makes her look even more divine! Seeing her with lighting like this really makes me want to install lighting for my own figures at home…

Note that they are both sold separately! As a part of the ex:ride series, Saber can of course ride on the Cuirassier perfectly – it was designed for figmas! 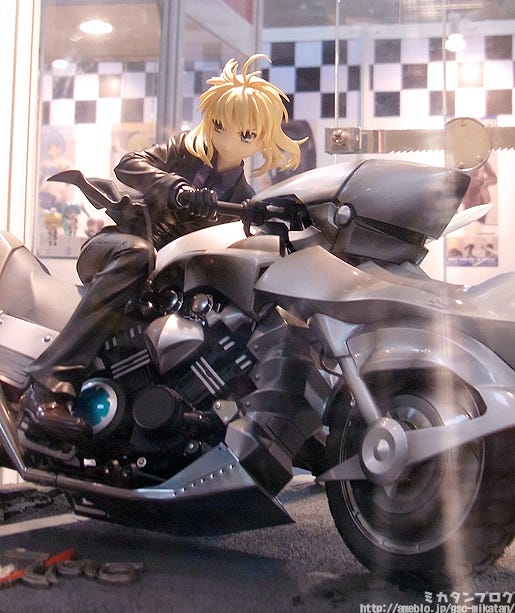 This isn’t the prototype, but in fact an actual sample from the factories! The manufacturing team have done a magnificent job, just look how incredibly she has come out!

I know a lot of you have been waiting for her – but the wait will be over later this month! 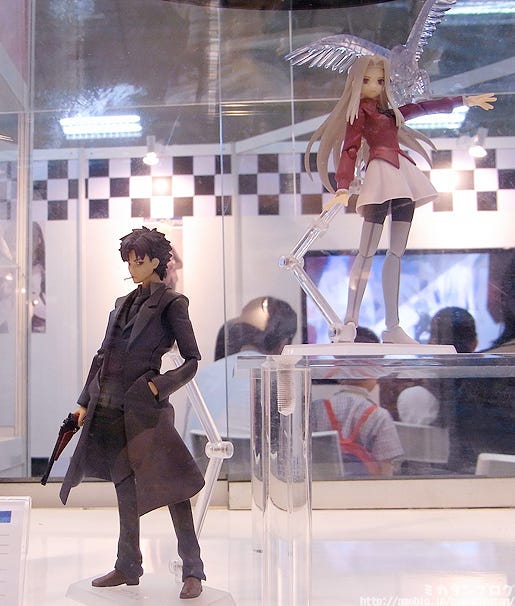 I might not be very good at it, but I tried to make some nice poses for the figmas – what do you think? ^^;

Kiritsugu is a prototype, and I was constantly worried I was going to lose his cigarette…

Luka enjoyed all the attention of having everyone look through at her! Everyone else was taking photos from the front, so I decided to take a picture from the back instead! 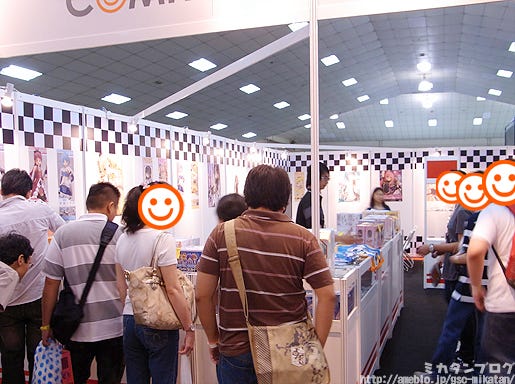 We also had a sales corner!

We were working with one of Singapore’s wholesale stores for this. They also helped us a lot with setting up the booth – thanks a lot guys!! 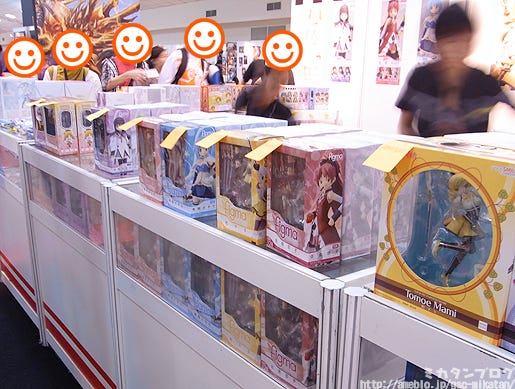 These were the goods on sale!

The Vocaloid products in particular were incredibly popular! There was also lots of Vocaloid cosplay – I guess it is just as popular overseas as it is in Japan! 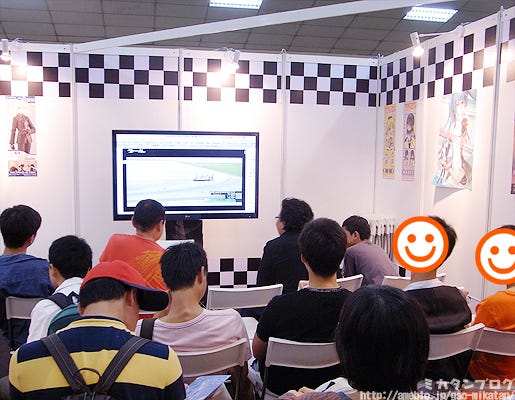 The Sepang race was being screened!

At the GSC Cafe back in Japan we were hosting a public viewing of the race, so we decided to host one here at AFA as well! This photo was taken on the first day, so this was actually the preliminary race.

The next day we of course had the actual race showing, and every time the Miku car made an appearance the audience would all shout ‘Oooh!”. It was great!! 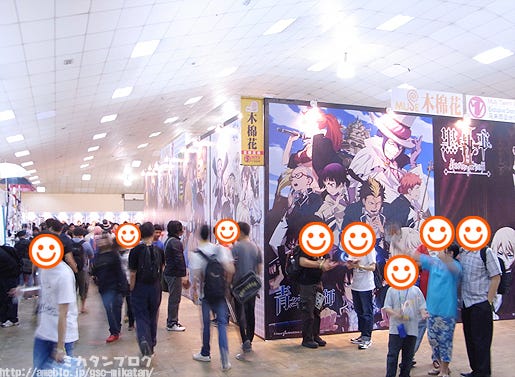 Time to wander around the event!

The event wasn’t that big, probably about half the size of the enterprise booths at Comiket. But even though it was smaller, it did seem more dense with things to do! 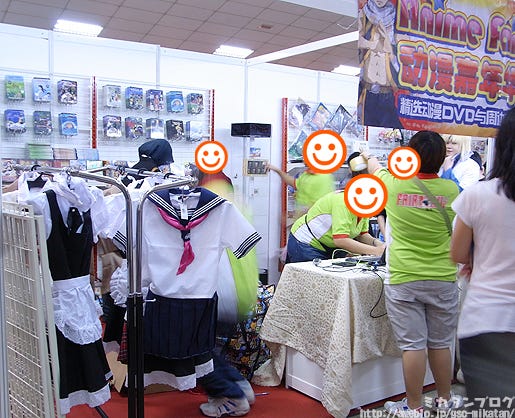 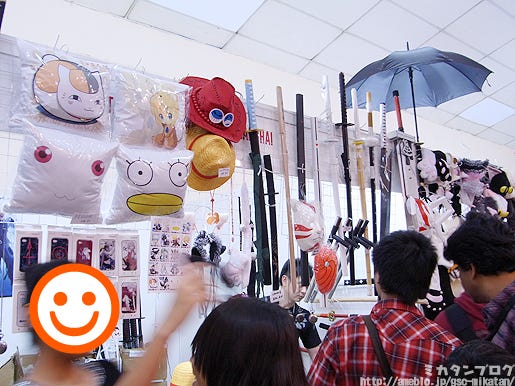 There were also swords on sale!

Whenever I go overseas I always see swords on sale – and lots of them!!

This store was also selling cat and rabbit hats that were incredibly popular! (There were tons of people wearing them at the event, which was absolutely adorable!) 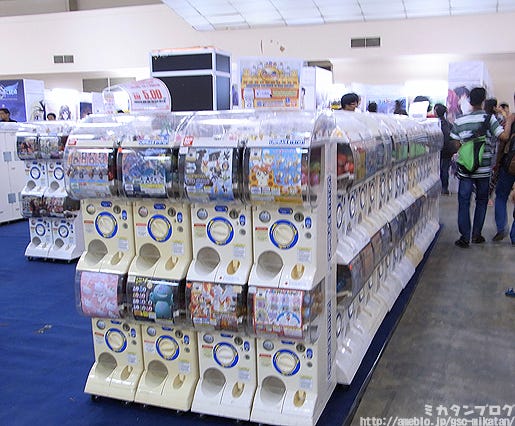 There were quite a lot of them to look through, all with all sorts of toys very similar to the ones you would find in Japan. I wanted to try them myself, but I didn’t have the right kind of coin on me… :( 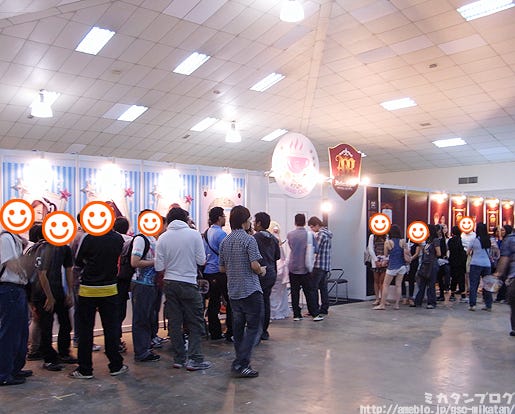 A maid café and a butler café!

At the very edge of the booths, there was a corner filled with tasty places to have lunch! The left side here is the maid café and the right was a butler café!

You can probably tell which was which just by which customers are lining up where – the queues for both seemed like they would never end. ^^; 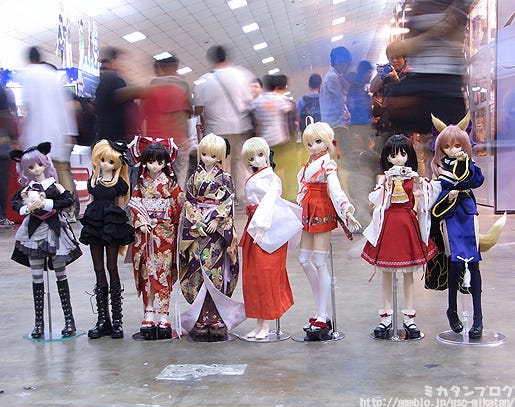 Dolls in the pathway!

Not even off to the side – right in the middle of the path!! I know they have stands, but I’d be worried that someone was going to kick them over!!

But it seems everyone in Malaysia is careful!

There was about a 1m area around the dolls that never had anyone inside, with people taking photos on the outskirts! 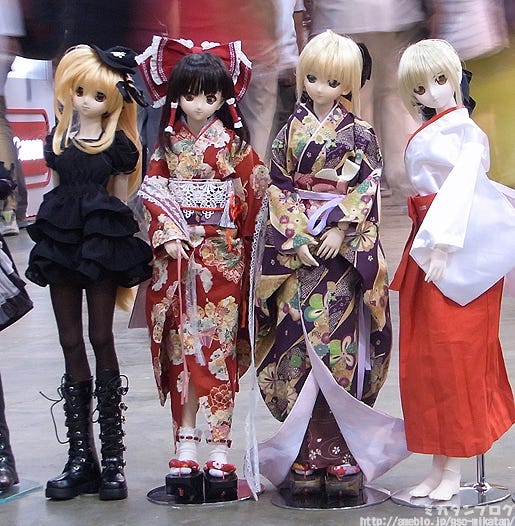 They all look absolutely lovely! From the kimonos down to the sandals on their feet!! There are even patterns used on the straps of the sandals! They are so amazing! I also love the bow in Reimu’s hair – it’s perfect!

Anyway, my AFA report will be continuing tomorrow!

I’ll also be getting some comments from a special guest – look forward to it!