You can see a load of KAITO figures all over this desk. :P
How many can you count in this photo…? 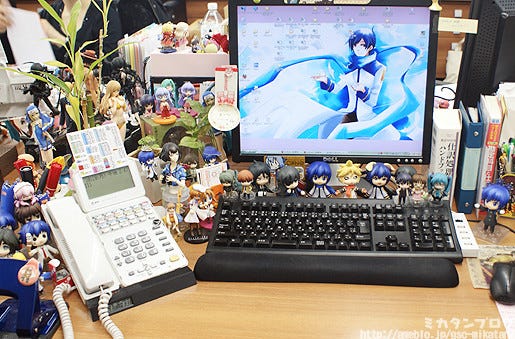 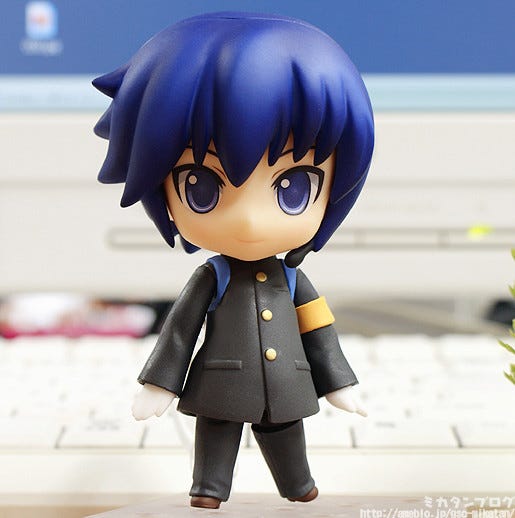 The sixth month of the Cheerful JAPAN! project brings Nendoroid KAITO back in a special Cheerful version!

He is scheduled to ship next week!

Those who ordered him will be able to enjoy his company shortly! I’ll be doing a normal figure review just as always for this lovely cheerful Nendoroid! 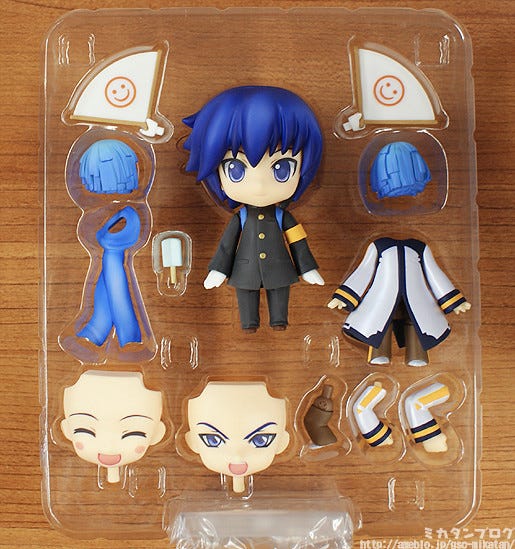 He comes with everything the standard Nendoroid KAITO came with, along with extra items such as a new body, pompons and folding fans! The new body has KAITO looking very neat and tidy, and even features in the recently released 3DS game,  Miku Hatsune and Future Stars Project mirai! If you’re a KAITO fan, be sure to give the game a try as well! 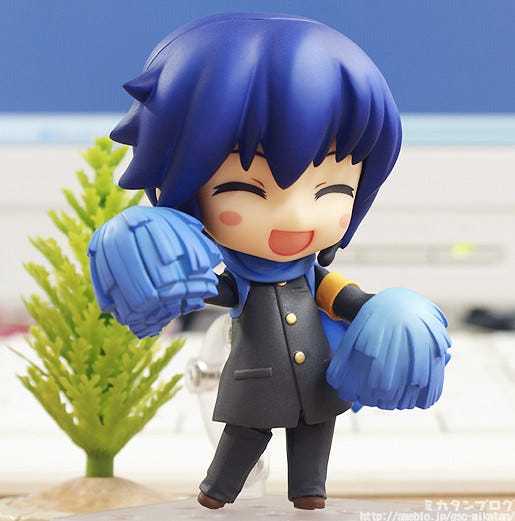 Simply remove the white gloved hands and replace them with these pompons for this cheerful pose! All the pompons from the other Nendoroids in the series can also be used in the same way, so if you want him to hold a different colored pompon, the option is there! 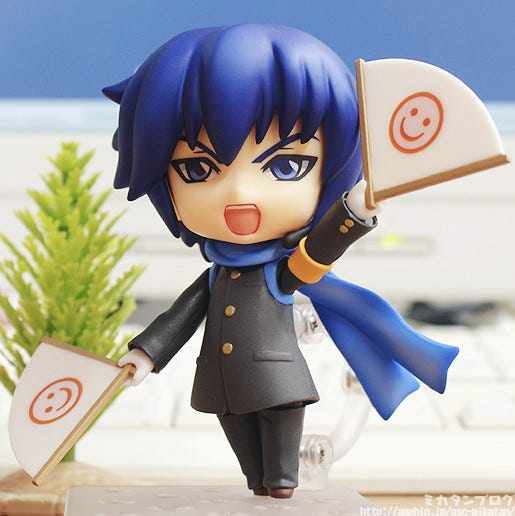 The ‘hero’ face and folding fans!

I love this proud looking expression so much! :P The fans have the Good Smile smiley face mark on the one side, and the Japanese flag on the other side! Just look how determined KAITO is to get the message across to everyone!

The scarf from the original body can also be worn with the new body, as you can see here. I’m sure it will work other characters as well, but just be careful not to lose the scarf, as it’s loose! 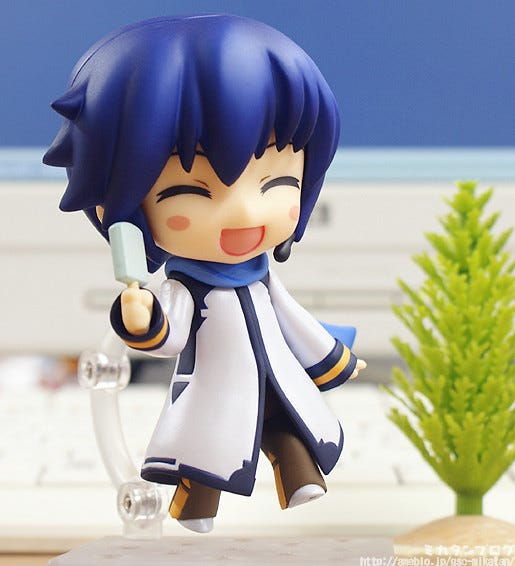 The standard body is also included!

Here we have KAITO holding his favorite ice cream while skipping along with a glowing smile on his face! It’s been 2 years since he last went on resale, and you can really see the quality of production has improved with new technology. The pearl coat looks absolutely beautiful! 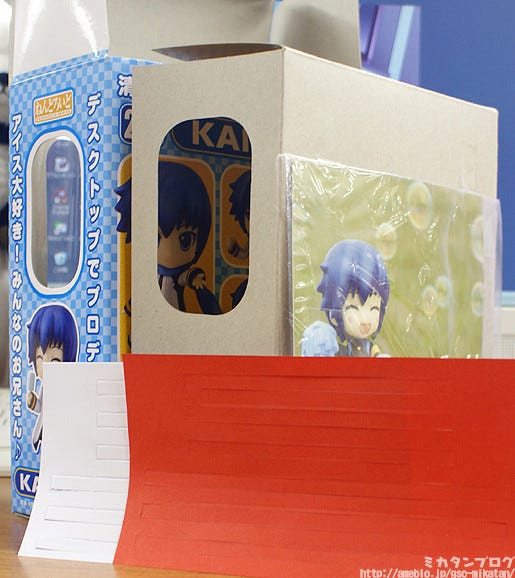 Behind the inner cardboard is a papercraft headband!

The ‘inner cardboard’ is that mat behind the inside of the package. Just pull it out and you’ll find a postcard and a papercraft headband! The headbands come in red and white! 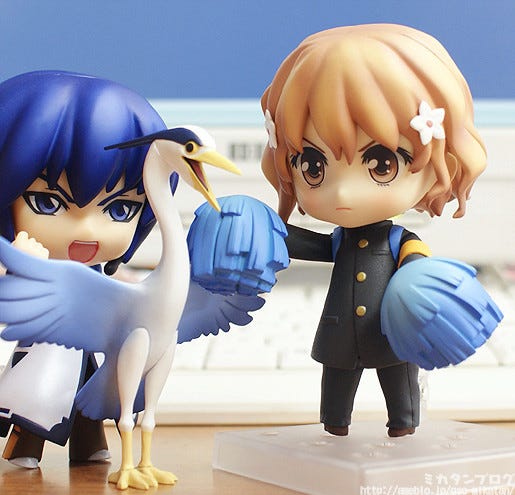 The uniform might be designed for a guy, but it still looks super cute on a girl!!

A bit unrelated, but that bird included with Ohana really has an amazing presence…. just like in the show! The mouth isn’t made of separate parts, how did they manage to paint inside there with such detail?! 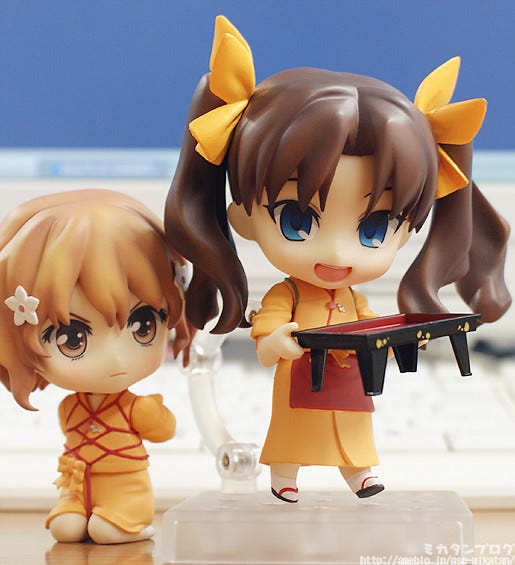 Those who ordered can expect a delivery within the next few weeks! The exact details will be put up on the Good Smile website shortly!

And lastly, a quick notice:

As it was announced on the GSC website, we will be temporarily closed from the 14th March to the 16th March for staff training. We hope this will not cause any problems for our customers.

The next blog update will be on the 19th March. (Monday). This isn’t because of the staff training per se, but in fact because I need to catch up on lots of work…. I apologise to everyone who enjoys reading the blog! I promise the work I’ll be doing will make up for the lack of blog updates!!

But thats all for today,
I hope to see you all next week!