The Cheerful JAPAN! project has been going for a year!

As of the 11th March, it will have been a full year since the earthquake and tsunami. I hope that over this year those affected by the disaster have managed to get back on with their lives. My heart goes out to all of you. I believe there is still a huge amount of work to be done in the areas that were hit, but there is more and more progress each day.

Good Smile Company has been working together with other companies for the past year to run a charity project to donate money to help relief efforts, and we thank everyone who has purchased any goods that were a part of the project – know that you’re helped in the restoration of Japan!

This is the last Cheerful Product! Let’s take a look! 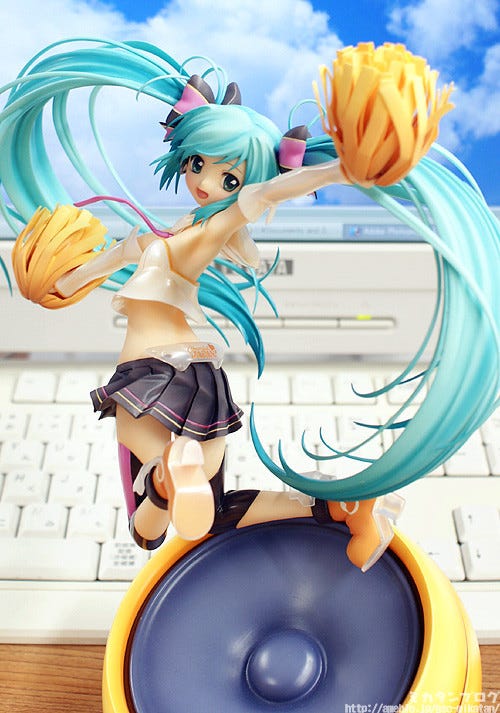 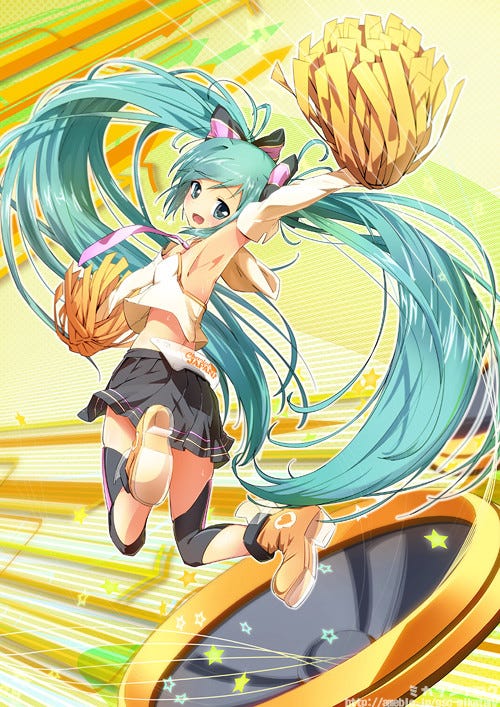 She’s so adorable!! The illustration really fills you with energy just by looking at it! That twisted body and long flowing hair are also absolutely stunning! Let’s take a look at her front!

You can’t see the front side of her on the illustration, but on the figure you can see the design is complete, and you can look from any angle you like! The first time I saw her from this angle I could hardly contain my excitement… I just love the way she is designed! 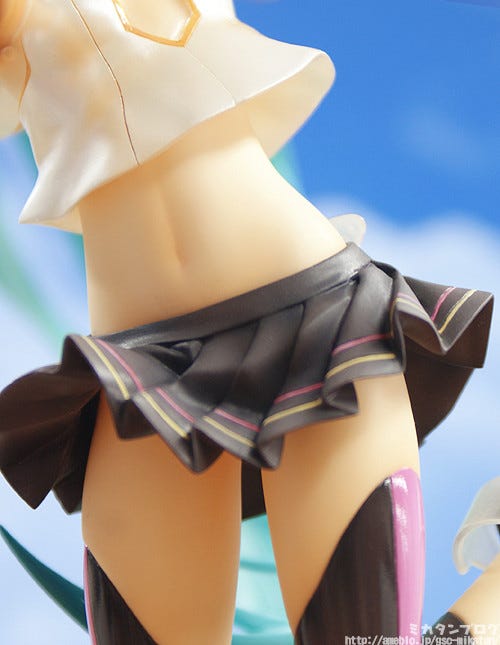 A close up around her her stomach!

The cheerleader’s outfit has a very high waist line, giving you tons of skin to enjoy! Plus even though she is wearing a skirt, you can make out the outline of her body through it perfectly! 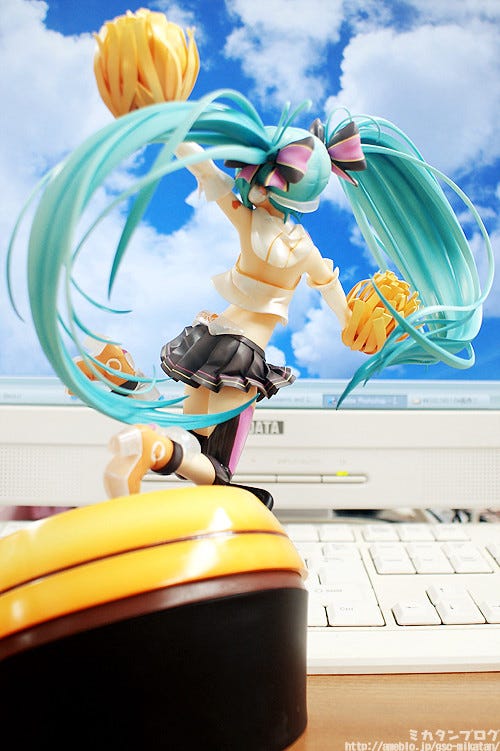 This is really a figure that you can enjoy from absolutely any angle. Plus the giant speaker seen in bun150’s illustration is used as a base for her! 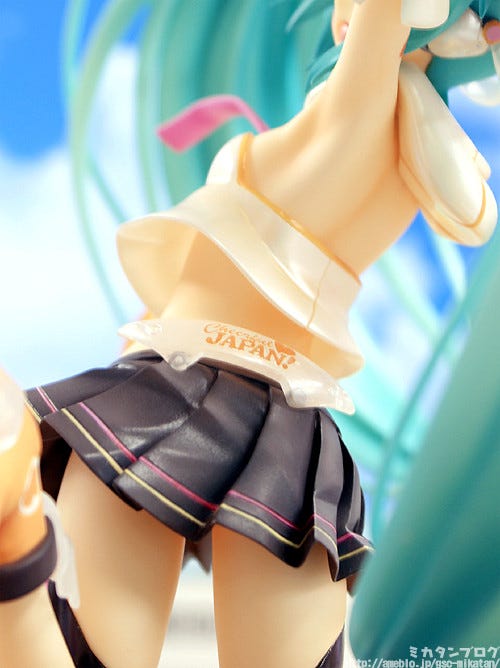 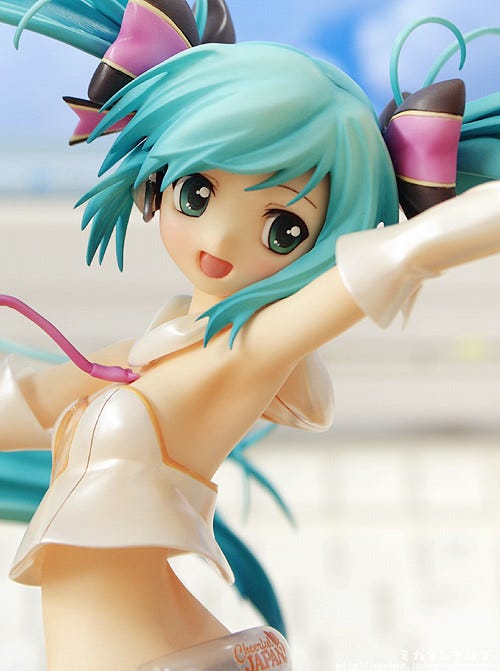 Such a lovely smile!

She has a nice young look about her, and the big ribbon in her hair suits her so nicely!! Plus even zoomed in as close as this, you still get a really dynamic feeling from the way she is posed! 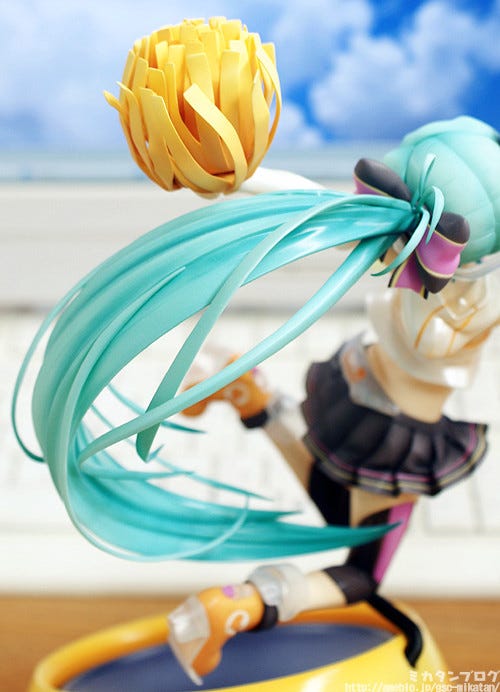 That subtitle almost sounds like the name of a song. :P A look from above gives us a good indication of just how incredibly the hair has been sculpted! (I was really scared it would snap if I touched it, so I got Hiro-san to help me out…)

I’m absolutely certain this is going to be a nightmare for the manufacturing team though – there will be so many tiny parts to work with! :P 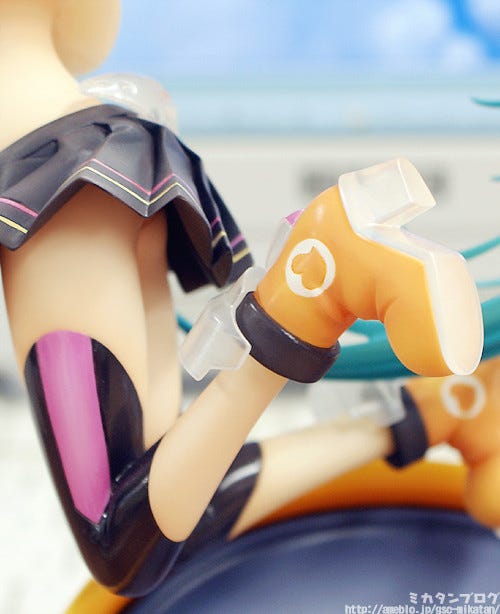 She even makes use of clear plastic!

As you can see on the original illustration, Miku has see-through parts to her outfit – all of which have been added using clear plastic on the figure, including the soles of her shoes! I think it’s a really cute idea for a design. 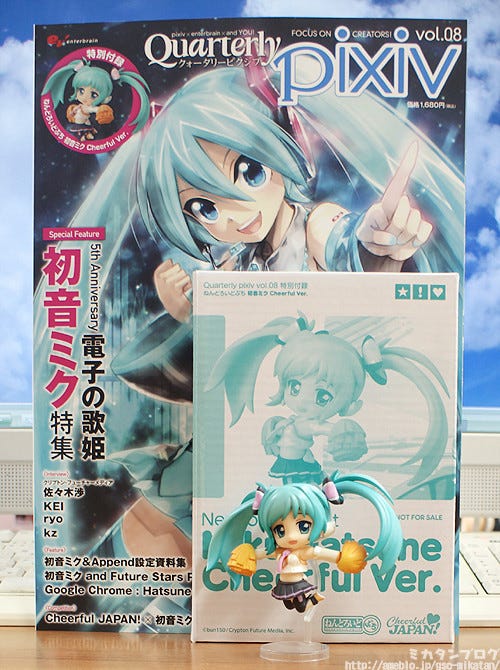 Plus, tomorrow the 9th March…

Is the release date for ‘Quarterly pixiv vol.8’!

As a bonus included with the magazine, a Nendoroid Petite of Miku’s Cheerful ver. is included! The detail on the little Nendoroid is so incredible it’s hard to believe that it’s actually just a Nendoroid – don’t miss out on her if you’re a fan! The magazine also includes Crypton’s wat-san and some inside info about Project mirai! It is so adorable to display the big and the small versions together! Plus the Nendoroid version can stand without the need for her stand – the twin-tails can hold her up perfectly!

■ She will cost 10000JPY. Delivery in Japan is free.
■ For each sale made, Good Smile Company will donate 2000JPY to aid relief efforts in Japan.

Please take note of the following if you want to order:

And now for some notices!

Nendoroid versions of Miku and friends will all dance and sing for you! Good Smile has been very involved with the production, and SEGA have been very helpful with so many things! I’m confident to say the game is a load of fun!! It’s filled with lots of love from Vocaloid fans, so if you’re a fan you are bound to enjoy it!

And from today, the Akiba GSC-Tetsu Cafe… 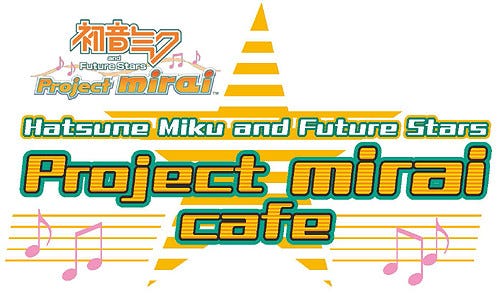 Is a Project mirai cafe!

What kind of cafe is it going to be? Akiyama-san has been wandering around there, so I decided to ask him! 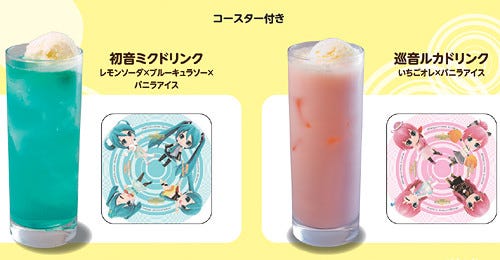 This is the drinks menu!

Drinks based on Miku and Luka’s image colors! They have ice-cream in them, perfect for the upcoming warm months! Plus a coaster is included with each drink you order! 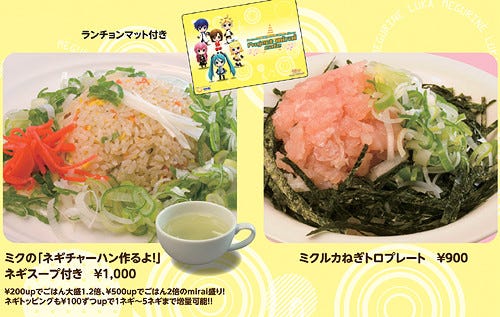 Next is the food menu!

These are also based around Miku and Luka! They look absolutely delicious… each food order also comes with a paper place-mat that you can take home!

So… by the time you’re reading this, I’ll probably be in the cafe trying some of the food! :P I’ll have a review up on Friday! (`･ω･´)ゞ

Another notice!
The Black Rock Shooter anime airing on noitaminA…

Now has a special page to itself!

The anime is getting more and more exiting with every episode!
From today and for the next month, we’ll be passing on some special info about the series!

Comments from those involved, never before seen images and other things that should be interesting for fans of the series… be sure to check it out!