Most of the time I generally spend my days either at home or in the office, but March often ends up as one of those months that I get out quite a lot. If you see me out and about know that I’m not really the social type, but if I’m called out for an event like this one, I’ll do my best to not disappoint!!  (`･ω･´)ゞ

I’m sure I’ll end up a complete nervous wreck on the day of the event… but anyway, for today we’ll be continuing this corner!

Today we’ll be taking a look at everyone’s lovely photos!

Hello, Mikatan! I love reading your blog! ♪ I wan never much of a figure lover, but I recently decided to pick up some figma figuers and took some photos (on my cellphone…) It was my first ever attempt, so it’s a bit amateurish, but it was great fun for me! I have no experience taking photos, so I hope they’re not too bad!

As you can see, I tried to build a figma arcade! 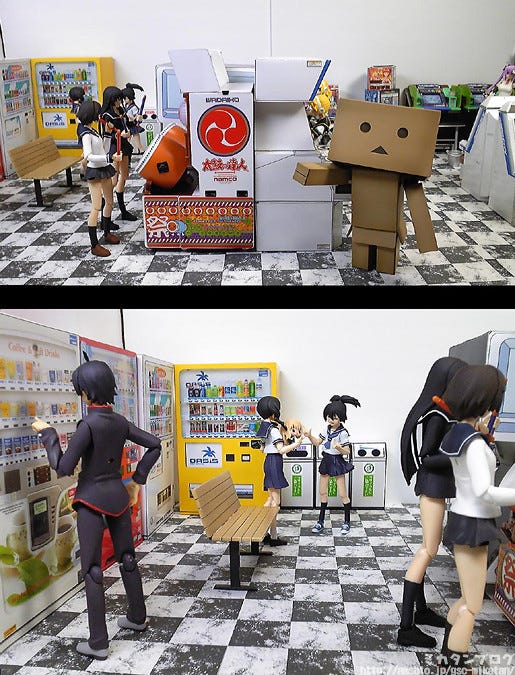 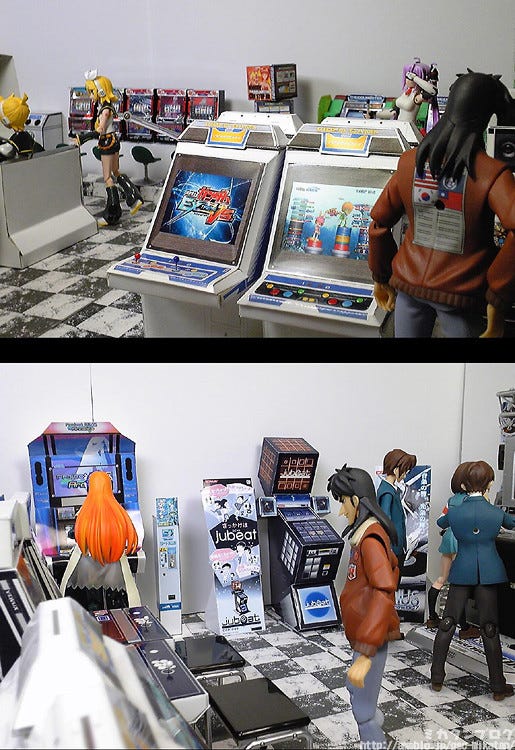 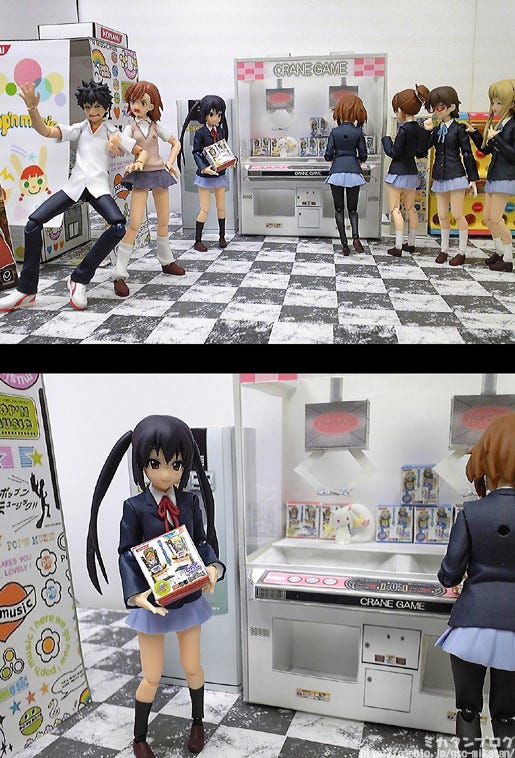 I can’t believe how amazing this is!

There was even a layout map for the arcade included in the files that were sent to me! Everything is made so carefully, and the characters all seem to be having such a good time! It makes me wish I could jump into the arcade and join them all! I’m sure it must have been a lot of work to leave so much space available for photos as well… and it probably took ages to get all the figmas into their poses as well. Not to mention the poses are very well done!! (Their positioning as well!)

Thank you so much for sending this through, I really enjoyed it! As a side note I also really love the way Kaiji seems to fit in so well! :P

I was looking at the upcoming 3DS Project Mirai game, and Miku and the others looked so cute that I had to try and pose my own Nendoroids in the same way! My favorite song in the tracklist for the game is ‘Sing & Smile’, so I decided to pose my Nendoroids just as they looked in the game. I hope you enjoy it! 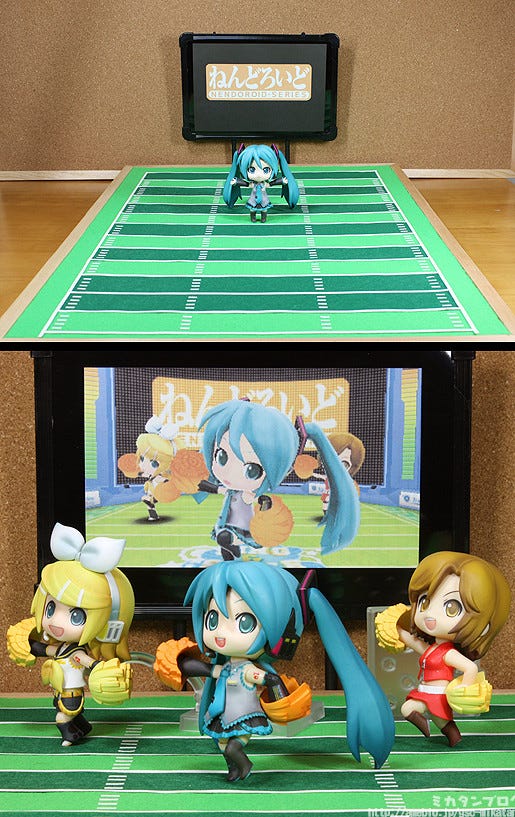 Another amazing work of art!!

When I first saw the comparison I got goosebumps! It’s a perfect recreation with real Nendoroids! I feel like I’m going to break down in tears! :P

It’s so lovely to see how much people love the Nendoroids! I know that Miku and the others love it as well!

“You! You were watching!”
I finally got my hands on figma Sakuya, I was so happy I had to take a photo! 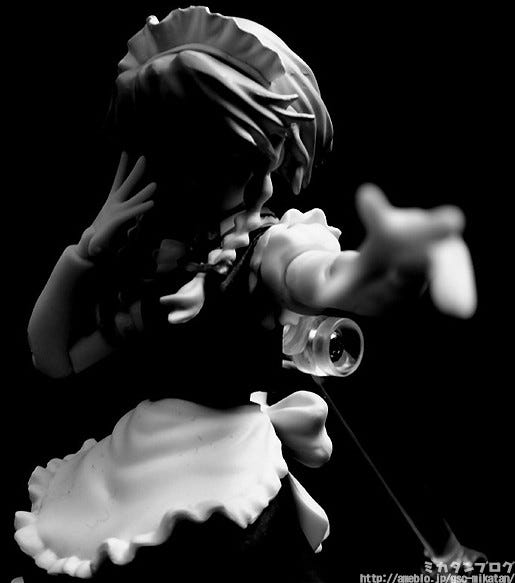 The way her face is hidden gives it such a powerful effect! How did you take this photo? It’s amazing!!

Today I went down to my local shop and saw Nendoroid Petite Madoka on sale. I bought a couple and luckily managed to get both Madoka and Homuhomu, so I took some photos! I much prefer buying singles and getting the rush of getting your favorite characters instead of just buying a complete box… 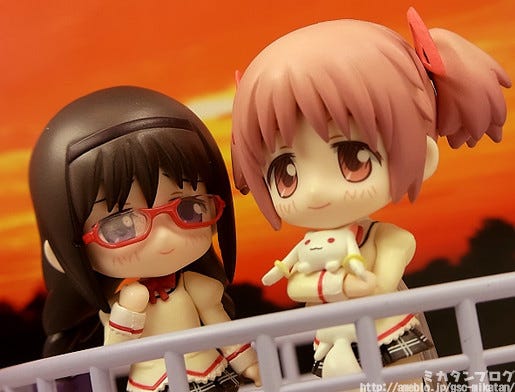 So cute!! … I actually said that out loud to the monitor… :P

HomuHomu’s expression is perfect for the way she is staring at Madoka like that! Wondering what character you’re going to get is one of the best things about Nendoroid Petites in my opinion! I also get super exited while I’m opening the box and wondering who is going to be inside!!

I grabbed my Nendoroid Taiga Aisaka and just had to recreate the ‘Palmtop Tiger’! Unfortunately that meant I had to take the photo with one hand, which was shaking so it didn’t come out very nicely ^^; Thanks so much for turning one of my favorite characters into a Nendoroid! 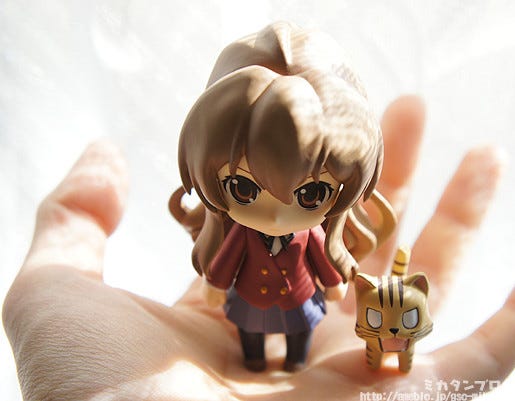 The way the sunlight is beaming onto the photo is very nice! I think it’s a lovely picture! Plus… I love the way she is looking up at you like that, it makes we want to hold her myself!

I can happily say that today, although a bit late, my Rin & Len Cheerful Ver. has arrived! I decided to play with them and really enjoyed seeing how much work went into the smaller details that you normally can’t see, like the ears! The two of them are now happily displayed on my desk together! I’ll take good care of them。 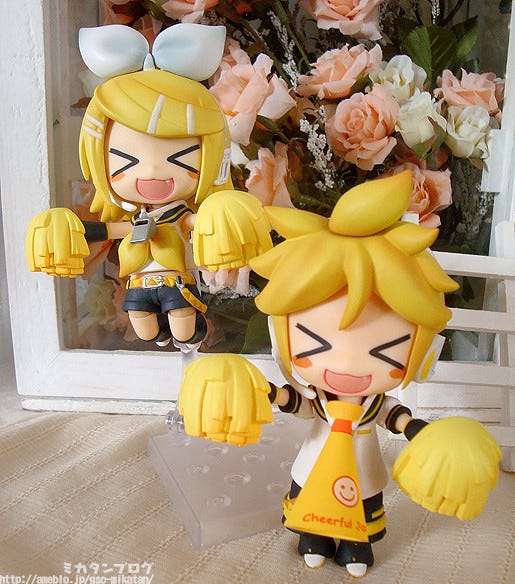 They both look so happy!

There were many, many resale requests for Rin & Len, so I’m glad we were able to release them again and even include some lovely ‘cheerful’ extras! They look so carefree and exited… it really warms your heart just to look at them, doesn’t it!

I tried editing a photo for the very first time… but just a small edit! It’s a picture of the two Sabers. 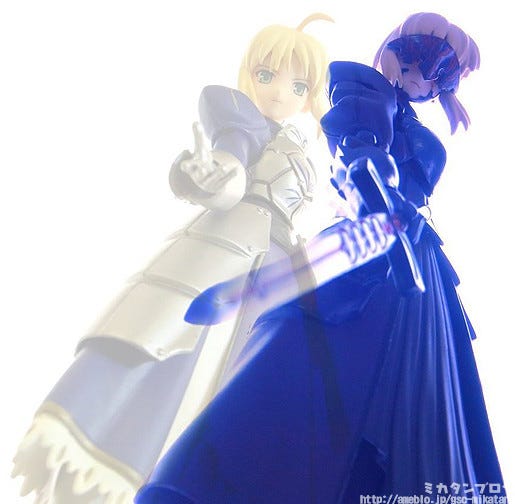 It’s a more solid version of Saber Alter with a feint image of the normal Saber standing behind her. A nice picture that compares the light to the dark! I also love the way that Alter is holding a sword, while the normal Saber is instead reaching out to us! I’m jealous that you can take such nice photos, let alone still edit them to make lovely effects like this!

Miku is becoming a housekeeper! I hope she cleans the house up for me…
She seems happy to help out right from the start… I just hope she doesn’t look out the window and see how messy the real room is! :P 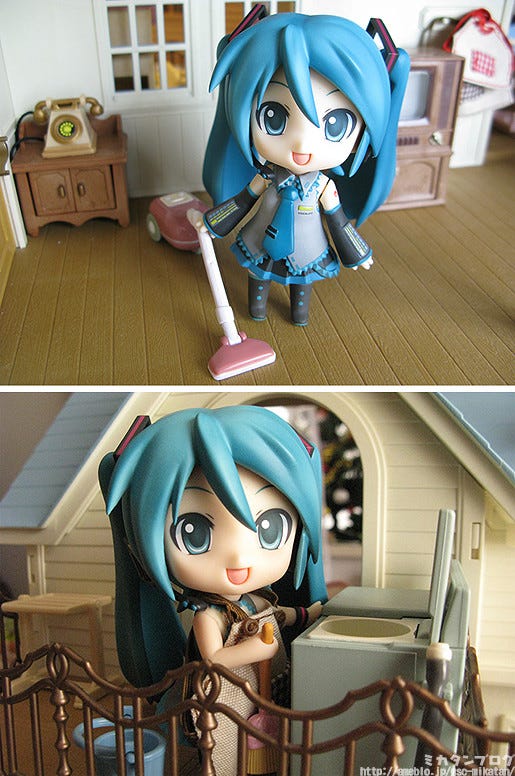 At least… I think it is a Sylvanian Families playset… I’m sorry if I’m wrong. :P I wish I had a Miku housekeeper to keep my house clean as well! She can also make some delicious food for me… and when she sees the house is messy she can get all angry and shout at me! (escape from reality :P)

Hi Mika-tan, this is the first time ever I had sent an email to you.
I had just received my Black Rock Shooter Beast yesterday and really like it. This is also the first figma that I had to pay a crazy amount of shipping fee :o Here is a picture that I took her with my Scale PVC Black Rock Shooter Animation ver. 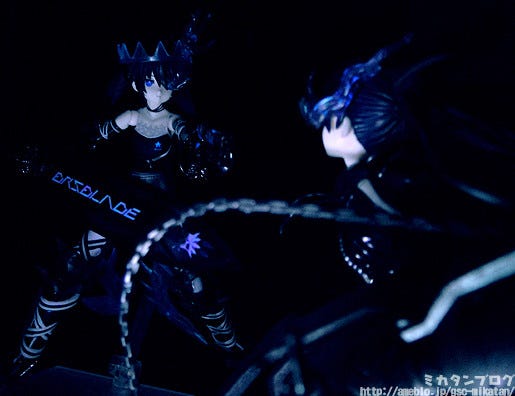 I’ve been getting lots of pictures from people overseas, and lots of them make great use of lighting and send in lovely photos like this one! The way the light is shining on BRSB’s blade so that you can just make it out is wonderful!!

Christmas has come along, so I thought I’d send in a seasonal photo! HomuHomu and Madoka are together this Christmas, so there is nothing to worry about! I also have to say that I love the way this year’s Snow Miku looks! I don’t any Miku figures at the moment, so I’ll be sure to grab that one! 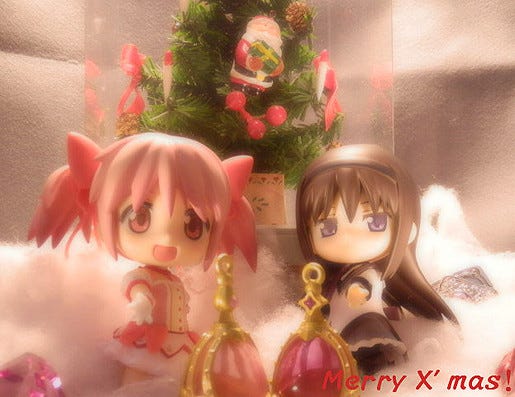 Sorry for missing this at Christmas time!

I received so many Christmas and New Year’s photos, but I just never get around to putting them up at the appropriate time… sorry! But this one was so cute that I had to put it up, even if it was late! (`・ω・´)ゞ It gives off a very nice Christmas feeling, and makes me feel all warm inside when I look at it!

The attached image is to wish you a Merry Christmas! I hope you’ll take a look. The sword at his hips is pointing to one of the most important parts of Christmas! (´∀｀）

I really love playing around with Nendoroids at the moment! It’s so much fun! >< I’m always looking forward to seeing what Nendoroids are coming up next, so good luck with all your work! 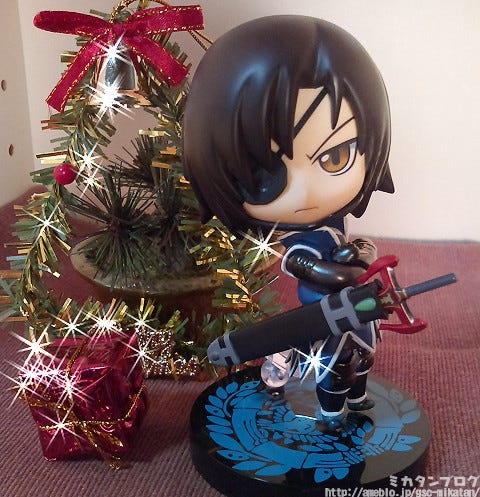 What an adorable idea!!!

It’s nice to see a mix of Christmas along with the very Japanese taste of Sengoku Basara! The sparkling effects also create a lovely atmosphere!

I read your blog pretty much every day! Thanks so much for writing so often! I’m also a girl that loves figures of cute girls, and I’m glad to know there is someone else who shares my happiness! I live in Sapporo, the Miku loving city, but unfortunately I wasn’t able to go any buy a Snow Miku at the event this year! …(ノД`)

I was frustrated, so I decided to make a huffed Snow Miku Chocolate! I’ll be watching the WonHobby Live while munching on this chocolate! 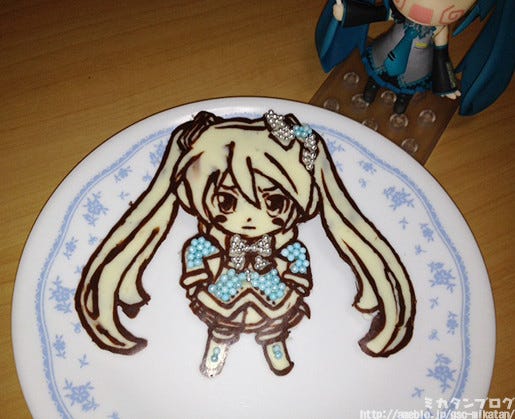 The expression is so perfect!

You can see all the fine little lines like around her eyes! Such small details!! On a figure, the expressions are definitely the hardest part to work with… I’m really impressed to see it done so well with chocolate!! If you ever make one again, please send it my way again!

I got a load of mail from female fans this time around. I’m sure there are a lot of people that wonder if they really ARE all girls, but I’m always very pleasantly surprised by the number of girls that come to chat with me at events! Plus most of them are really pretty! (Seriously!)

I went to the Sapporo Snow Festival the other day, and decided I had to send this photo I took while at the event. I hope you enjoy it! 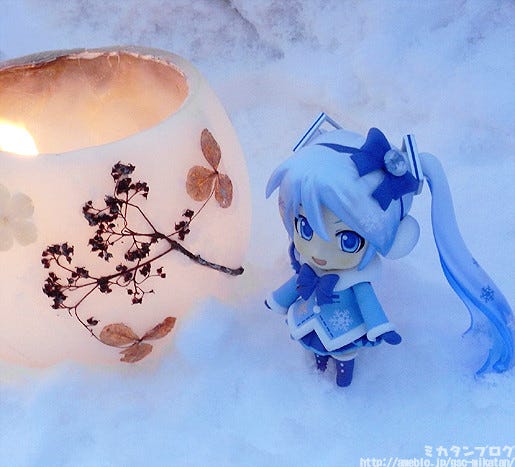 Snow Miku is so adorable!!

You’d normally expect photos in the snow to be filled with nothing buy a white or blue color, but the orange coming from the lamp contrasts so nicely! It’s beautiful! I wish I could escort Snow Miku through the snow myself…

I’ve noticed that Ririchiyo from Inu x Boku SS is really popular at the moment, so I decided to make my own Nendoroid Petite of her! She really looks cute no matter what size she is!

I’m looking forward to all of GSC’s upcoming products! 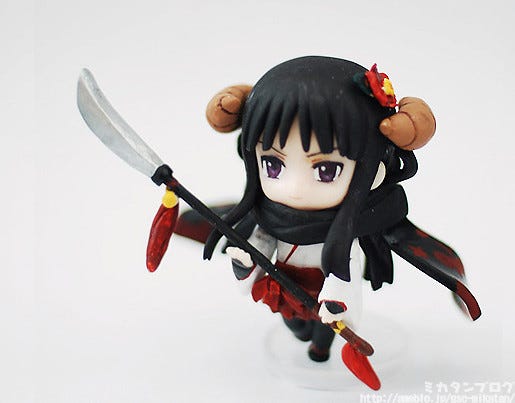 She is cute no matter what size!

It looks like you made her right from scratch as well! :O What would happen if you showed this figure to Riricho-sama?

As soon as I heard that a Gumako Nendoroid was going to be released, I decided this had to be done! The image I had of her only showed the left side, so I had to imagine the other sides for myself… The head is from Gumako, the body, hips and arms are from BGS and the legs are from Miku.

And there you have it, a Metal-Powered Gumako Nendoroid! ^^ I painted the eyes, but that part was very difficult… 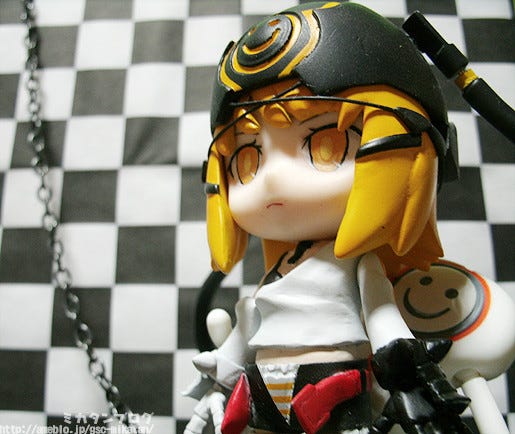 She even has the striped panties!!!

This was the character drawn by huke for GSC’s 10th anniversary! She looks really great as a Nendoroid… maybe we should make an official one… ^^

That brings this Kuroyagi-san’s Letter Corner to an end!

Thanks to everyone who sent in mail!!
I read through every single one of them!

As always, I’m always looking for more mail from readers!
If you have any questions, photos, product requests, want to talk about what you ate today, or anything else! No matter what you want to talk about, send it through to me! Girls and boys both welcome!