Snow Miku has arrived in Japan!! 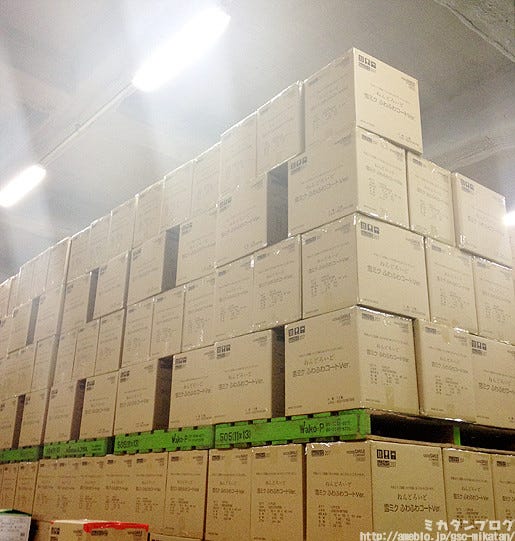 Yesterday, we went to the warehouse to take a look!


All these boxes piled up are filled with Snow Mikus to go to WonFes and Sapporo Snow Festival. I’m glad to see they’ve all arrived safely, so today I’ll be doing a review of her! 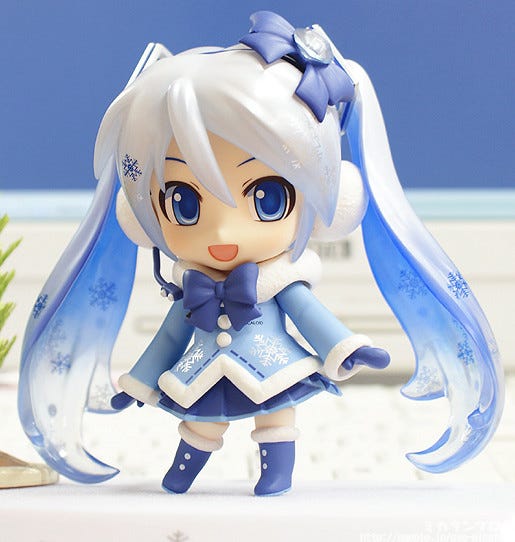 This is the Nendoroid made each year in commemoration of the Snow Miku sculpture being made at the Sapporo Snow Festival! This year loads of outfits were submitted to the website Piapro, and then the most popular was selected by popular vote on WonHobby TV 10!
This year’s Snow Miku design was submitted by Nanaka! ヾ(･∀･)ﾉ゛
She is a very fancy looking  fluffy jacket, and even gems on the ribbon in her hair! 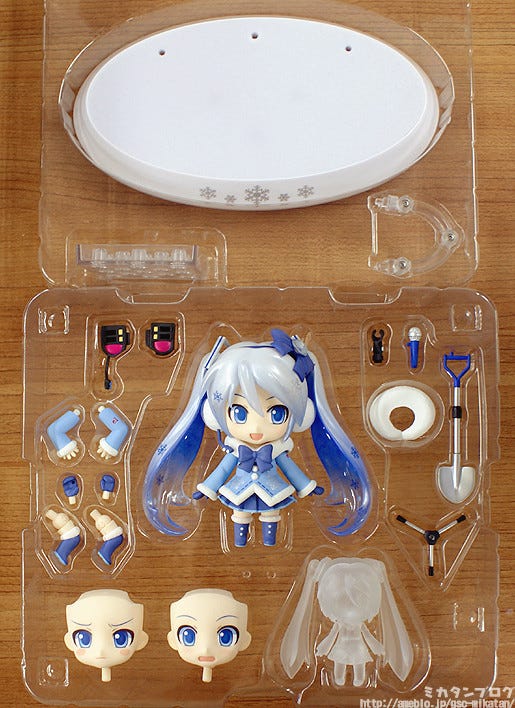 She comes with three expressions! Along with a number of cute Nendoroid parts to play with! The standard expression makes it look like she is looking around and enjoying the snowy scenery around her! (Personally I love the way her eyes look…) 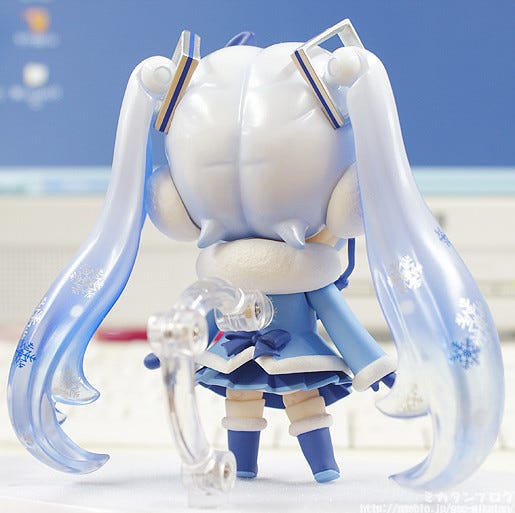 Takanon was in charge of the sculpting for this Miku – just look at the way the twin tails curl in! Such lovely sculpting! The snowflake prints on her hair are also beautiful. The previous two years the snowflakes were silver, but this time around they are silver and blue for a little change! 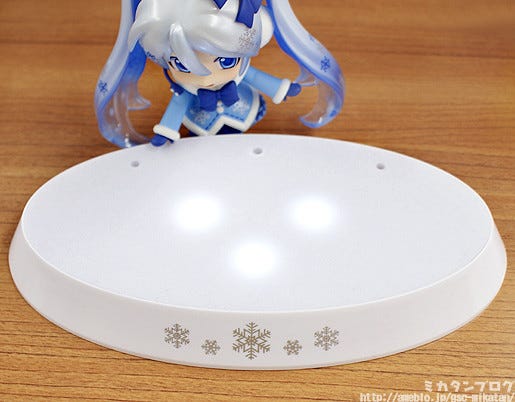 Her base has LED lights!

The base is shaped like an ellipse and has three different holes to place the arm to hold her in. That also means you can display three Nendoroids on it! (As long as they use arm stands) 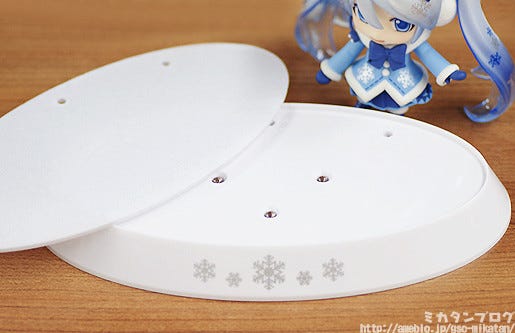 The top of the base can be taken off!

The top is also made of a very fluffy soft material – unfortunately it doesn’t come out very well in the photos. :( It also has a few silver bits mixed in to make it look a bit more like snow! Gakkun really put his heart into this little base! The material is quite delicate just like real snow, so do be careful when handling it! 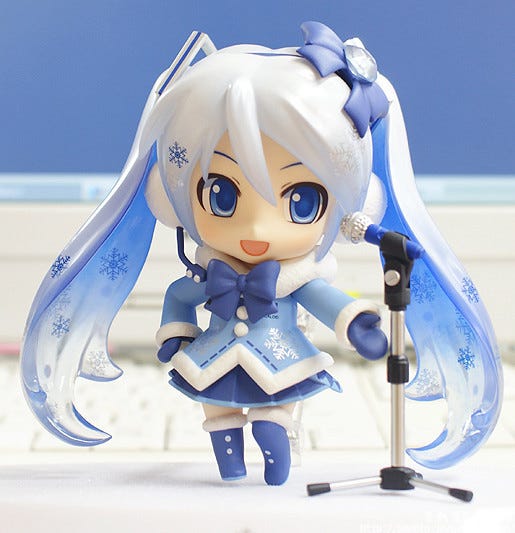 Alright, let’s move onto the optional parts!
First up, a smiling face and mike stand!

Nanaka’s spade-type microphone has also been included! You’ll see just why it’s called that a little later on :P She also comes with bent arms and bent legs for left and right allowing for some different poses! 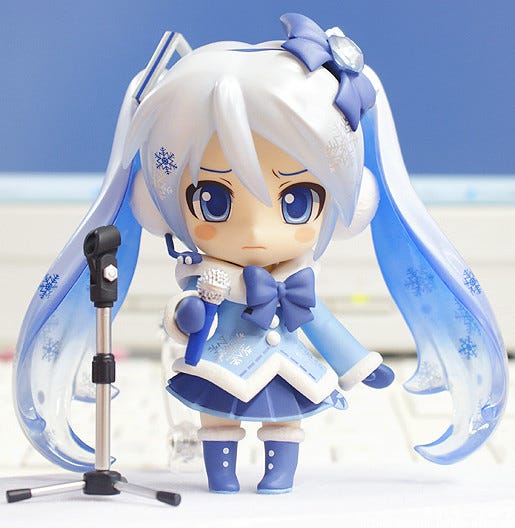 A cute, unsure expression across her face with red cheeks! Lovely! It’s so cute I could look at it all day… plus as you can see the mike can be removed from the stand and placed in her hand! 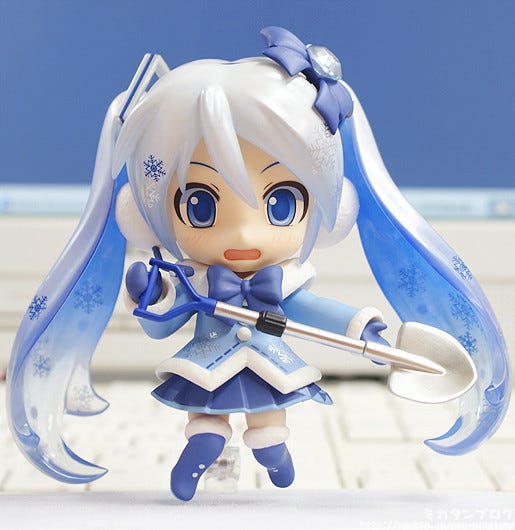 Holding the spade with a surprised face!

The mike can be transformed into this spade! Miku can then hold it… but what is she going to do with it? 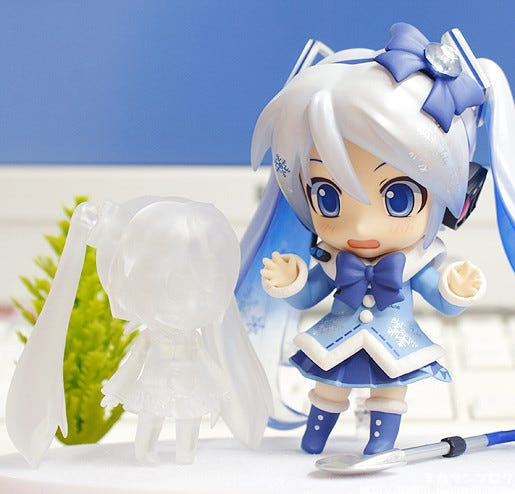 She’ll make a Snow Sculpture of herself!

It’s a Nendoroid Petite sized ice sculpture made from half clear plastic! It’s not completely white as that would just look strange, and it’s not completely clear so that it still has a slightly cloudy, icy look! The production team never cease to amaze me! Thanks everyone! 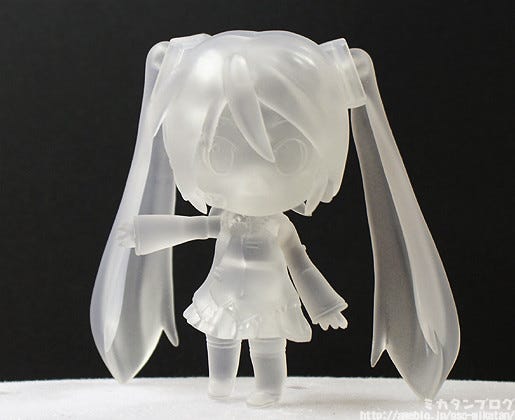 Plus her head and arms are posable!

Unfortunately the hips and legs are not posable so you can’t pose her that much, but at least you can move her around a little bit! You practically get a whole extra figure as an extra! 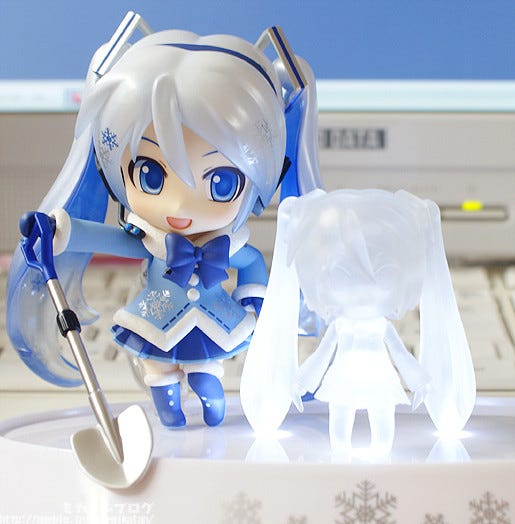 Let’s try the lights out!

The white background makes for a rather bad picture, but the clear Miku really looks beautiful when lit up! You can recreate the Sapporo Snow Festival right in your own home!! If you remove the top of the stand the lighting becomes a lot stronger as well – it’s up to you how you want to use it. It looks best to have the LED lights at the edges of her twintails and her legs.

The ribbon on her head can also be removed, but it does leave a small hole where it should connect on. I didn’t forget to put it on for this photo, I swear! :P 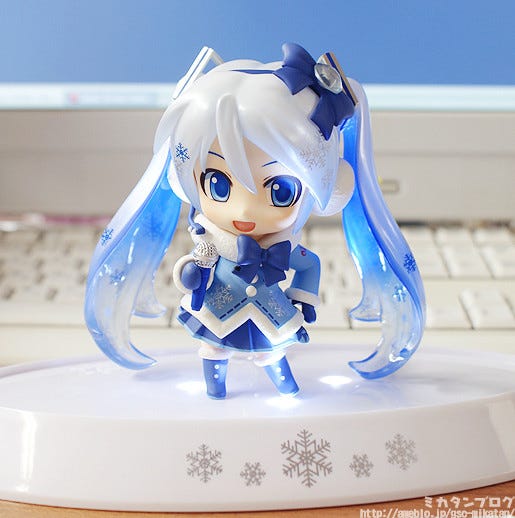 You can also light up Snow Miku herself!

If you want to light up Miku instead of the ice sculpture – it also looks great like that! Snow Miku’s hair is also made from clear plastic so it lights up very nicely! It looks like she is singing on her very own snow stage.

For those that think the base is too big – don’t worry as she also comes with the standard Nendoroid stand which you can see in the photo below. 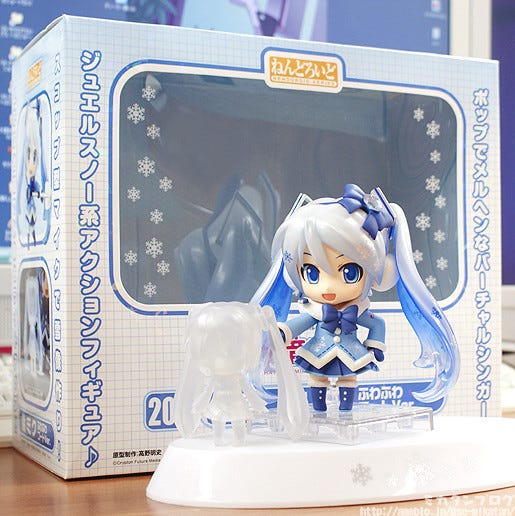 The packaging also has a lovely sparkling effect! A box very befitting of the gorgeous Snow Miku!! The box is the same size as the Snow Miku box from last year – a little bigger than the standard Nendoroid boxes.

For more information, you can view the following links: (Japanese).

Plus you can also grab her at CYPTON’s SNOW MIKU 2012 booth at the Sapporo Snow Festival! I’m definitely headed to Hokkaido to join in at the festival! I can’t wait!