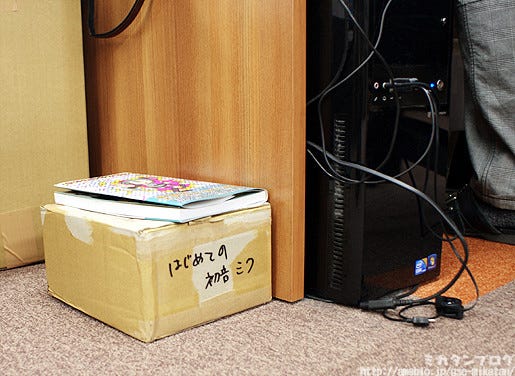 I get the feeling that it very well might be!

I previously showed just a single shot on twitter, but today all the parts are together for us to take a look at! 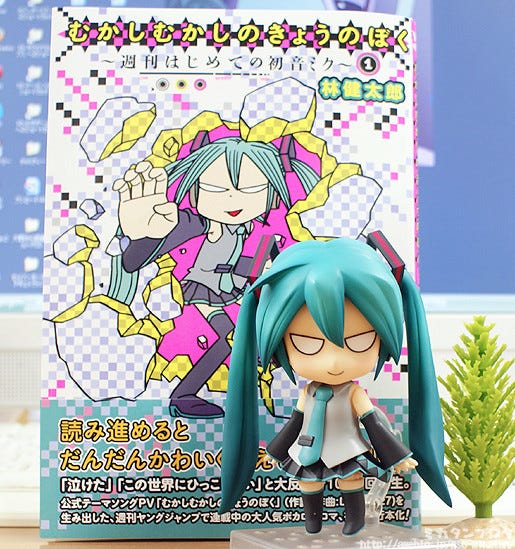 Shuukan Hajimete no Miku Hatsune Miku is a weekly 4-panel manga that is currently being serialized in Weekly Young Jump. It features a Miku with a rather different expression to normal!

She might look a little scary ar first, but if you actually read the series you’ll see she actually has quite an likable personality!
The first volume of the manga is now up for sale!
There are actually a lot of lovely little stories in the first volume, so do check it out! It’s also super cute! 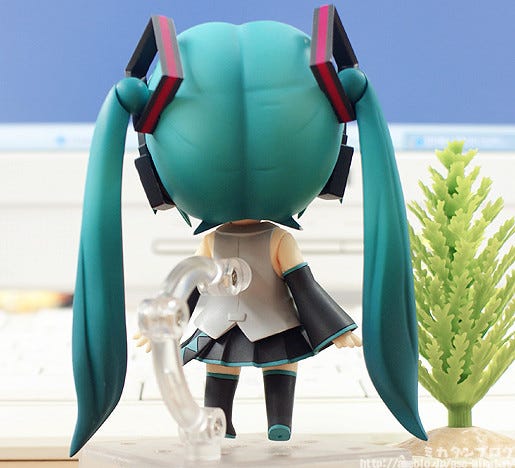 Miku looks great from any angle, but the back is definitely well known by fans! This version of Miku has slightly thinner twin tails that also have a lovely gradient to them! 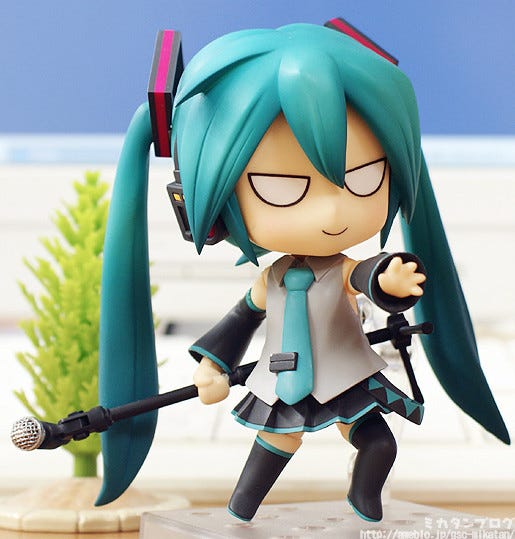 A confident expression and mike stand!

She also comes with a bent arm and bent leg for both left and right sides, letting you pose her in confident poses like this one! 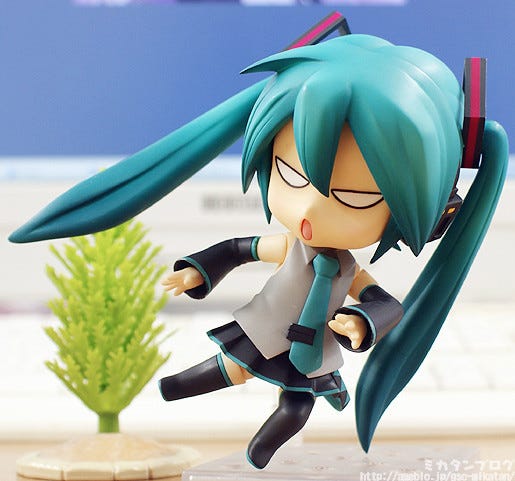 A kicking pose with a Achop face!!

All the expressions feature the blank white eyes that the series is known for! It somehow adds a whole different kind of cuteness to the figure! 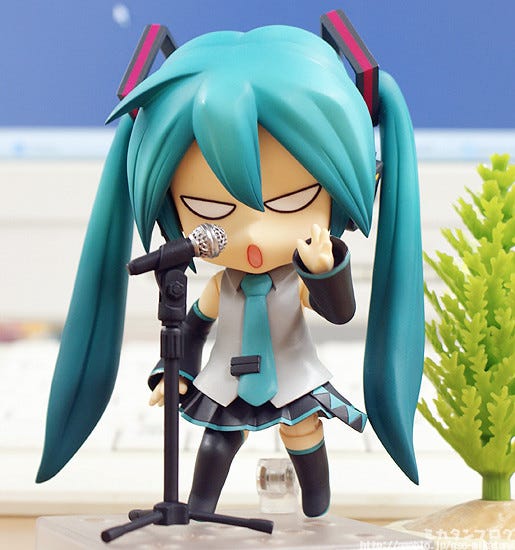 The mike stand can stand on its own!

You can have her hold it, or place it on the ground like this! I must say that this Nendoroid is very easy to get into all sorts of poses – after playing with it for just a short while I was able to get her into just the poses I wanted. It really feels like she just jumped out of the manga for me to play with!! 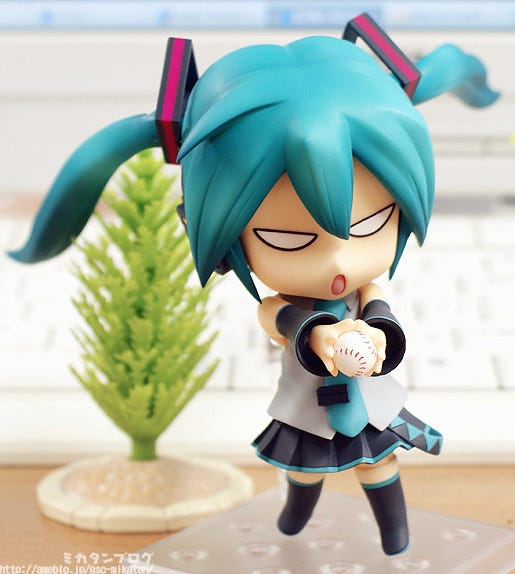 The scene where Miku-chan is stopping the balls from a pitching machine with her bare hands!! She shouts out “Achop!” as she does so! It’s so adorable!!! She comes with shoulder parts that let her put her hands out in front of her like this. 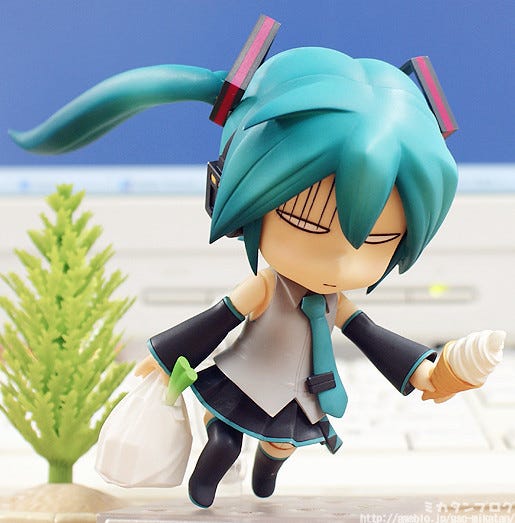 A shopping bag and ice cream!

Those who have seen a particular video will know these two particular items all too well! This is the Miku from the video, Mukashimukashi no Kyou no Boku!

Plus!  Soon after… she will trip and drop her ice cream… which will need… 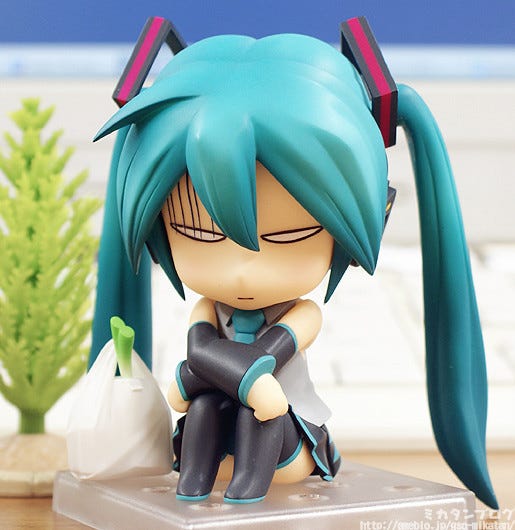 A depressed expression and sitting parts!

Just look at the way her arms are crossed! She really looks so upset and depressed all at once!! Once she is released, I want to go to take photos down at one of Matsudo’s river beds to recreate the scenes from the video!! 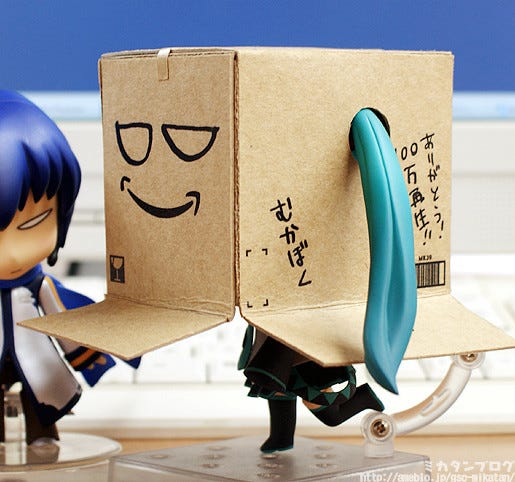 She also comes with a cardboard box!

This is to recreate a scene from the manga! If you don’t know where, you better check out the manga! :P The fine details like the hand-written words all over the box and even the fragile label have all been carefully recreated in Nendoroid form! 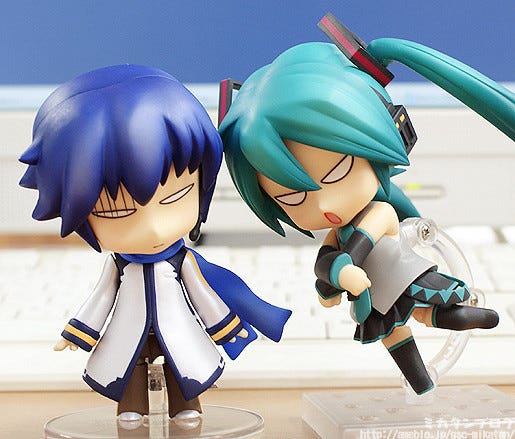 KAITO tries on the expression!

By the way… the pose is supposed to be Miku trying to grab KAITO by the neck and failing! :P I wanted to take better photos but just couldn’t find the time… it wasn’t because I was too busy playing around, I swear! :P

She’ll be up in the GSC site from tomorrow!
For preorder or sales info, be sure to check out our partner shops! 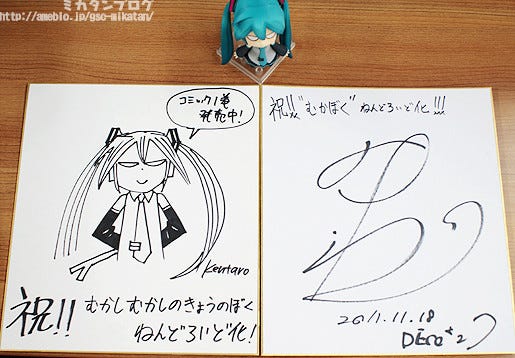 Plus…!
We got signatures from Kentarou Hayashi and DECO*27!

These are signed by the real deal!! I can hardly believe it!
Thank you very much!! All just for me!!
… is what I’d like to say, but they were actually for the whole of Good Smile Company! :P

I didn’t believe it myself at first, but he really will be doing it!


The deadline is 18th January 2012, so do consider entering!!
I’ll definitely be doing so myself!