Over the long weekend, I went to the Bonbori Festival with Oda-P! 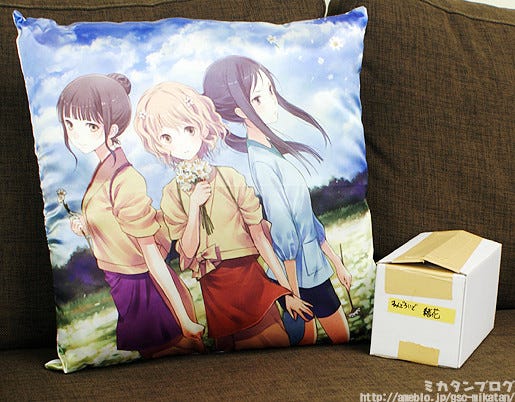 Yep! Today’s figure has a load of wondrous optional parts! I almost wanted to start today’s blog with them, but I’ll start as normal – scroll down fast if you can’t wait! :P 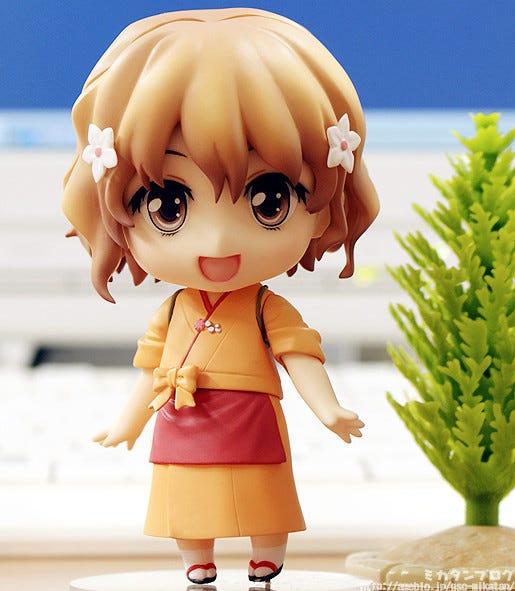 Her character designer is Meru Kishida, well known for his work on the Atelier series of games! Meru’s detailed character design has been shrunk down into adorable Nendoroid size! 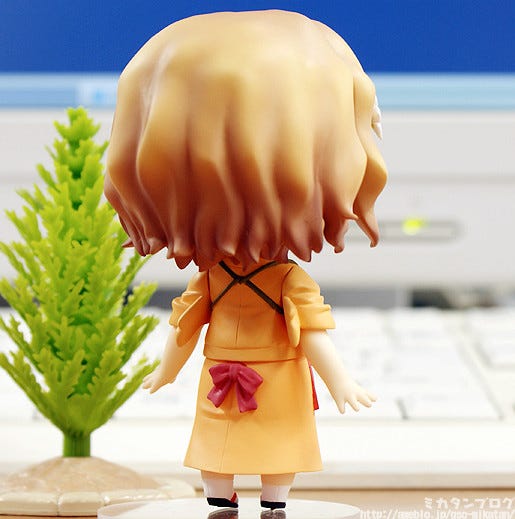 She is wearing the uniform she wears for her work at Kissuisou – the Japanese inn that she started to work at. The apron, ribbon, socks and even geta shoes are all very detailed even as a Nendoroid! As a side note… Oda-P seem s to be in charge of loads of characters in kimonos at the moment. ^^; 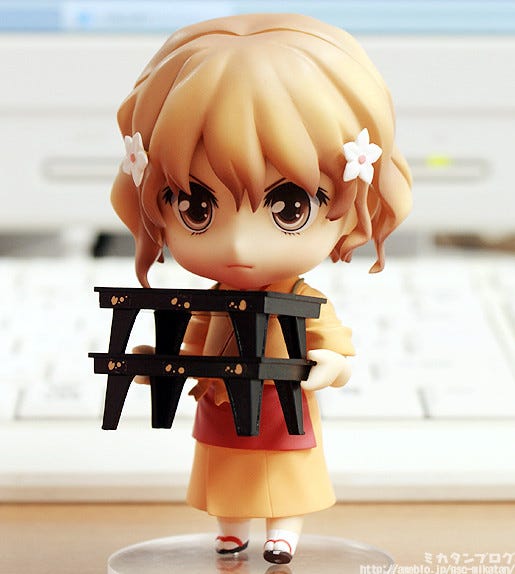 First up is a determined expression!

A perfect expression for the honest and frank Ohana-chan! Working as hard as she can, even when she is new to the work!

She also has trays with legs for the customers at the inn!

These are of course the trays she used to carry food to those staying at the inn – and she even comes with two, stacked up on each other! You could probably place all sorts of things on the tray for an even more convincing rendition! 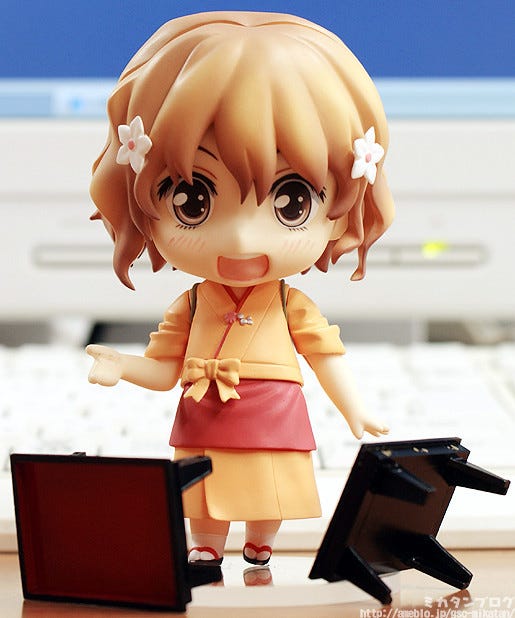 Next up is a surprised expression!

Ohana has all sorts of expressions in the series – so it’s nice to have some variety on the Nendoroid as well! Both the shoulder area and the area where her bare arms start are posable, allowing for all kinds of poses! 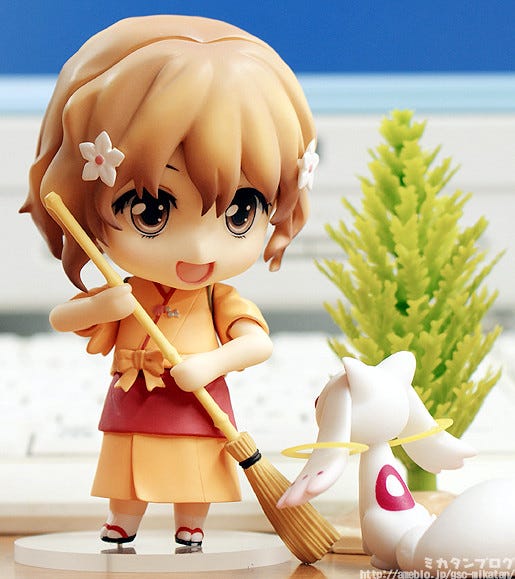 A wooden broom and arms to hold it!

Once she has finished carrying the food t all the customers, she needs to head to the entrance and clean up a bit… it seems she has come across a rather peculiar looking animal though. (Kyubey isn’t included! ^^;)

The extra parts that come with Ohana-chan are really nice big things like the trays and broom, it’s fun to play around with them! 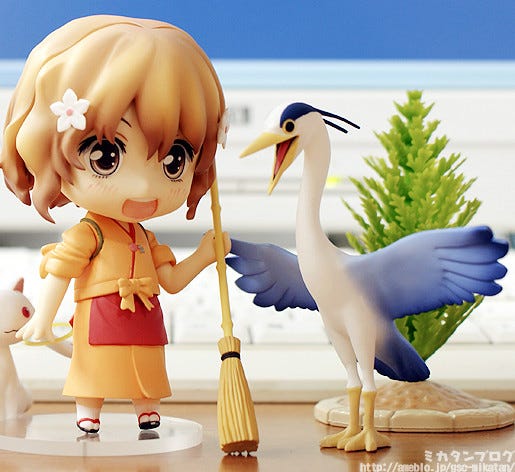 Not this time! The Blue Heron is included as well!

Ohana meets with this giant bird on the way to Kissuisou’s rival inn, Fukuya. She really isn’t good with dealing with this particular bird!! The gradient used on the wings is really beautiful… plus it is really posed in a menacing pose which is perfect for the series! :P

We’ve already seen so many amazing parts… but this next one is quite different to normal. Of all the Nendoroids that have been made… I never expected parts like these! xD 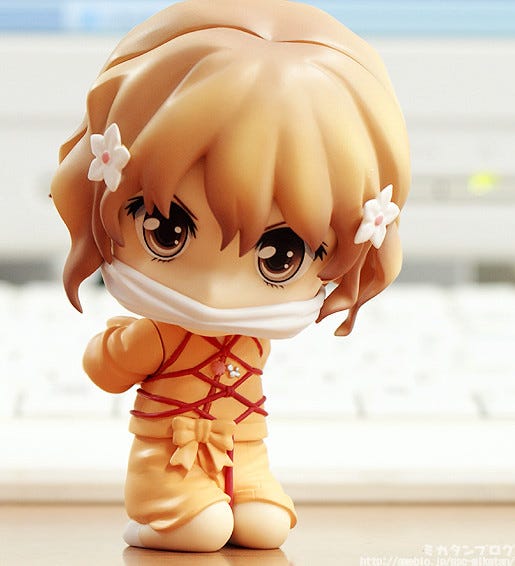 Those who have not seen the series might be wondering just what Good Smile gets up to in their spare time… :P I don’t want to spoil too much from the series, but let’s just say that she ends up like this in a scene from the third episode in the series – and these parts let you recreate that scene!

She even comes with the mouth gag!!

Which can also be removed, of course. I was quite amazed to see the permission to make these parts come out! ^^; 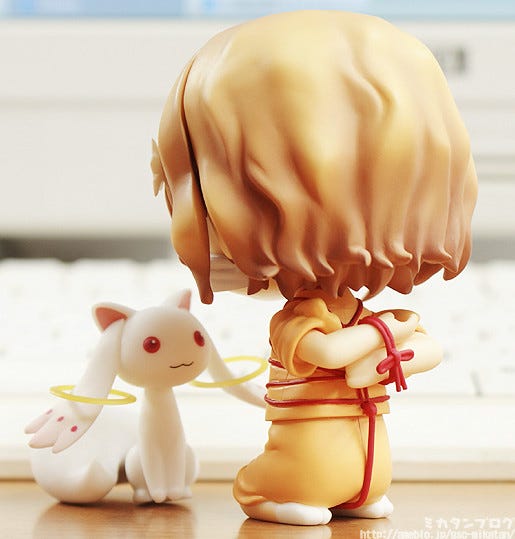 Looking from this angle, experts might point out that the tying isn’t done correctly – but even in the series the line “I just can’t get it right” came up. You have to be impressed that he at least tried it, right? :P I can’t wait to use these parts with some other figures… ^^;

She’ll be up for preorder soon!


For sales and preorder inquiries, be sure to speak with out partner shops! She’ll be up not tomorrow, but the day after that!