… I wish I could say that, but it really is only Tuesday… it’s sometimes tough to get the engines going at the start of a week, but let’s all do the best we can!

Today we’ll be continuing with this corner!
Kuroyagi-san’s letter corner!

Let’s get started once again! (･∀･)ノ

“AND FOREVER…”
A picture of the negotiator and maid!
I also heard that Norman was going to come out as well? I hope that’s true – I can’t wait for the announcement! 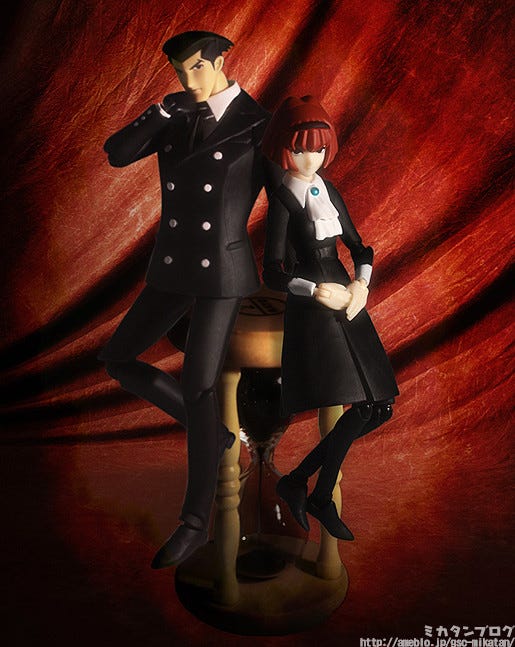 It looks like a release shot used on the GSC website!! The combination of the background, hourglass and poses just makes for a perfect picture! I wish I could take pictures of this caliber!

Now that the figma BRS series has all been released, I decided to take a collection photo! Looking forward to the BRS game! ♪ 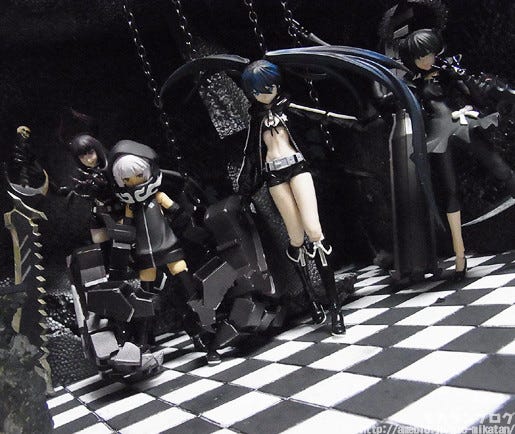 The series really looks impressive when all displayed together like this! The floor tiles also really bring out the series’ atmosphere! GJ!

This is my very first mail through to you!
I was so pleased to find out about the upcoming TV anime version of BRS.  As a commemoration for the announcement, I’ve taken a photo of Yomi & Mato after school! I can’t wait to try the game version out as well! 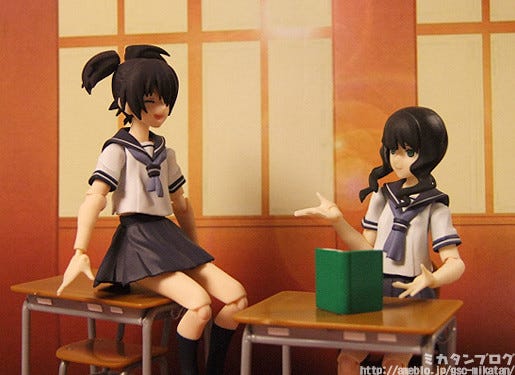 You also bring out their personalities perfectly by having Mato sitting on the desk and Yomi with a book open on hers. I hope next year’s anime lives up to your expectations – I know I can’t wait!

Hello. I’m a frequent reader that tries to read the blog everyday! Summer has come around now, so I decided to go out for some photos with Yoshika!
This Summer is going to be hot while we all try to conserve electricity, so some fun and games in water seemed perfect! 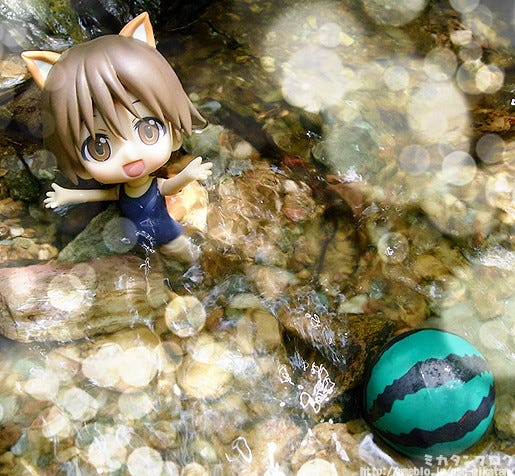 It’s so cute and refreshing!

Was this picture taken at a river? The way the light is reflecting off the water looks great! I wish I could go play with her!

I’ve been waiting so very long for my Nendoroid Taiga – even before the anime started I wanted her! Now that I’ve got her I’ve been taking all sorts of pictures with her!

One thing that Taiga is known best for is her love for food, so I’ve decided to send you this picture – picture her saying something like “Ryuji! It’s already cold!” 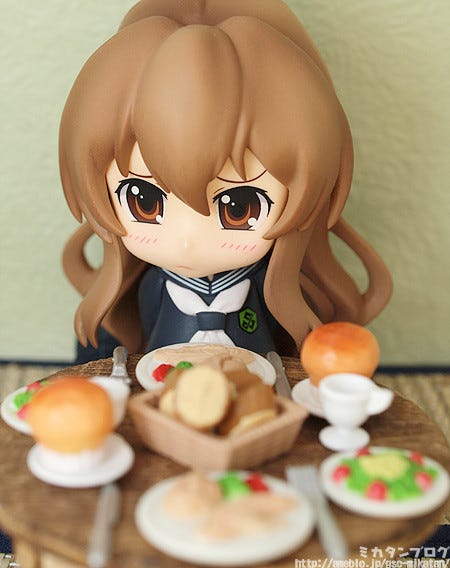 A very tsundere scene, ideal for Taiga!
I can understand why you have to say it twice – she really is so very cute! :P

I love the way the photo is taken from Ryuji’s perspective – there is even food for him on the table!

I grabbed Nendoroid Cirno, so I had to take some pictures of her!
I know most people see her as an idiot, but I think a serious face suits her quite nicely as well! :P 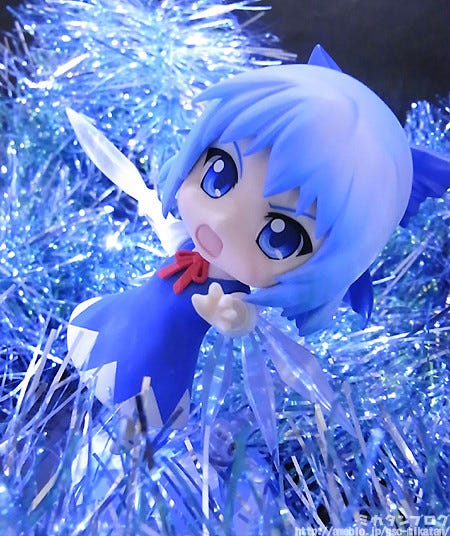 There was another who sent me a picture using real ice, but this actually looked more impressive to me! The lighting is so perfect that you just think it is real ice when you first take a look! 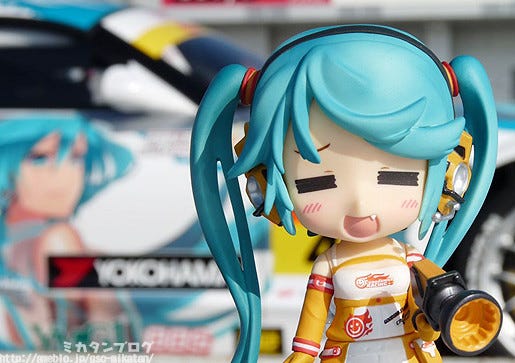 That smile really shows her enjoying her work! ^^
It doesn’t matter what she is doing, Miku is always an angel!

The final showdown of the series is coming up! I’m hoping the Miku BMW will take the gold!!

Hello Mikatan!
I am sorry for writing in english. My Japanese is very bad because I haven’t
used it in ages!
My good friend is moving away soon. I’m going to buy her lots of Good Smile
goodies to say goodbye!
This is a photo I took of my Sakuya figma. I hope you like it! 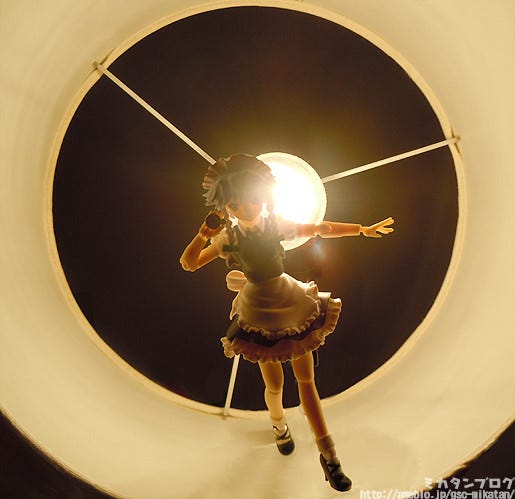 This is using a lamp shade, right? The stand is also nicely hidden so you can’t see it! A wonderful photo! I’m also glad to be getting so much mail from overseas! Thanks to all who sent in!

Was a really nice day outside so I went for a walk outside… and I found him!!
I found him just wandering about!!  (((゜д゜;)))
I think he’s already looking for a contract and I just haven’t noticed yet…! 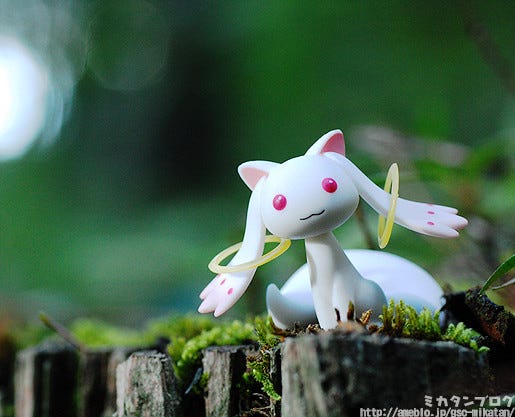 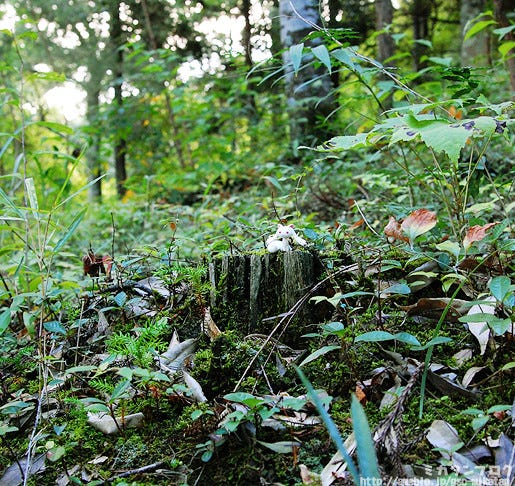 Kyubey out in the woods!

QB is well known to appear out of the blue in the strangest places,  but I never expected him out in nature like this! Somehow it does seem to suit him really well though… :P

I went out to take a look at the hydrangeas with Kuroneko while there was a slight drizzle.
They were super pretty~ 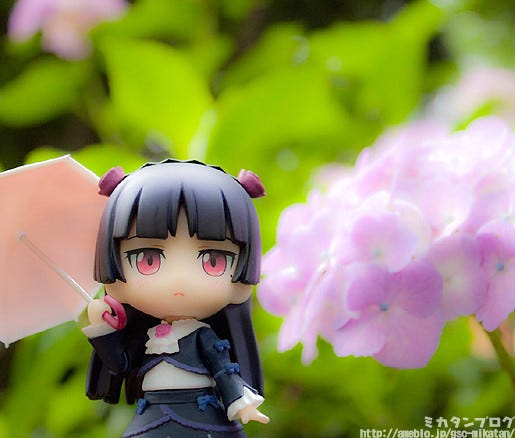 It really gives a rainy atmosphere!

Kuroneko’s umbrella also matches the colors of the hydrangeas very nicely! The rather unpleasant rainy season can be a lot of fun if you spend it with your figures! 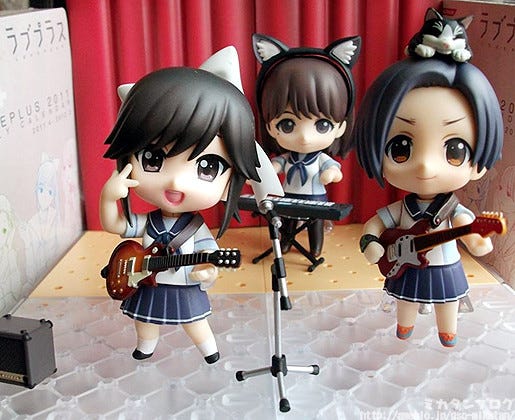 Manaka looks so cute with that expression!

A band with the three Love Plus girls…? I want to see it! Yet another wonder of figures – you get to do things like this! Plus the 3DS version of the game is coming out in December! I can’t wait ti play it!

Ever since I started taking pictures of my Nendoroids with the cherry blossoms, I can’t stop taking more photos with all kinds of flowers!
Now that it’s summer, sunflowers came to my mind, so I went out to a sunflower field in Ono city which is in Hyougo prefecture.
“I hope this smile reaches whoever needs it!” 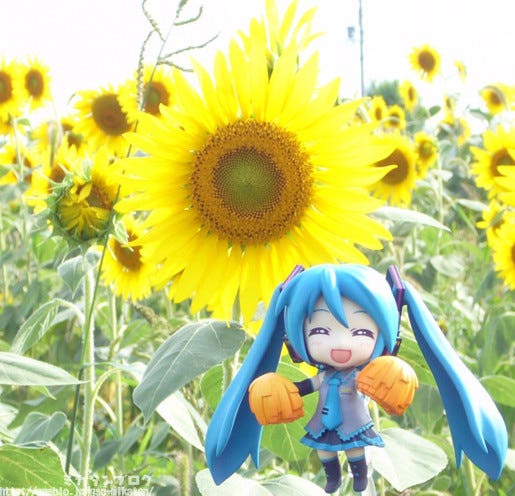 A photo that’ll make anyone smile!

At first I thought it was so beautiful that it must have been photoshopped, but there were other photos that clearly showed the stand – it’s such a lovely picture! This smile will get me through another day! 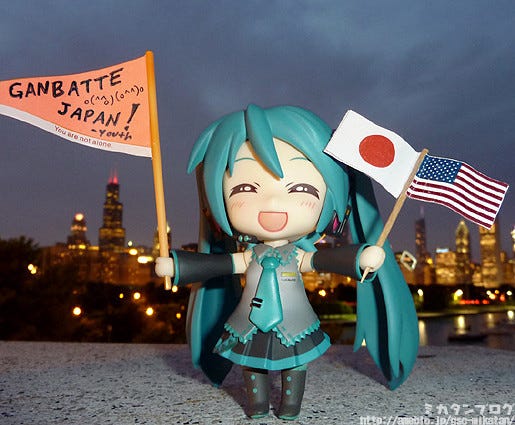 This photo comes from a reader in America!! She even has her very own Japanese and American flags to fly!
I’m so happy to see people all over the world supporting Japan like this! Thank you so much!! ･ﾟ･（ﾉД`）･ﾟ･｡

Nendoroid Totori was so cute that I just had to take some photos of her! I tried to capture the warm atmosphere of the game in the photo! ＾＾ 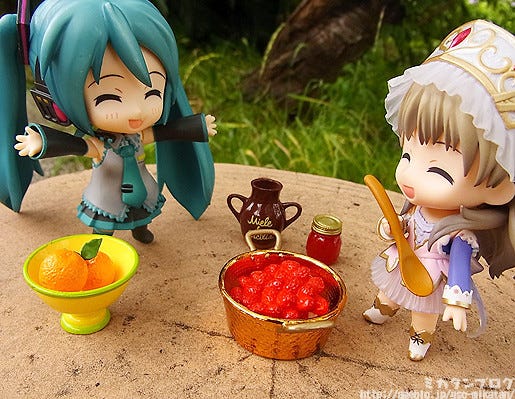 Totori-san is working on her alchemy!

And whatever she has made looks absolutely delicious! The relaxed atmosphere really comes though the image as well – I wish I could jump in and join them.

The Miku: Snow Playtime version I’ve been waiting for has arrived, so I took some photos!!
(I combined her with the Western set to create an after dinner scene!)
The embarrassed expression is way too cute! (*^_^*) 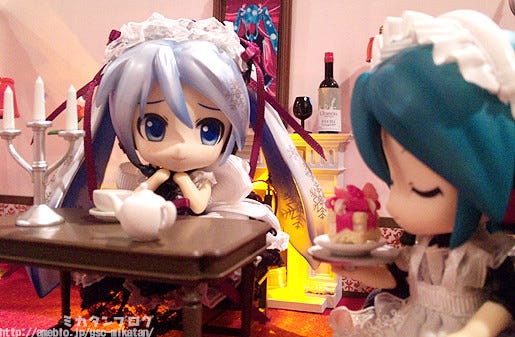 What a spoiled Snow Miku-san!

Are the clothes handmade?? The Miku in the front is also amazing! Plus the lamp lighting up the fireplace – so much wonder in a single photo!

I always enjoy reading your blog! I took a look at everyone’s great photos with amazing composition and lighting and tried taking my own picture!

My Date has readied some tea and dango, and is patiently waiting for the red one to arrive! I wonder when he’ll arrive…(´・ω・`) 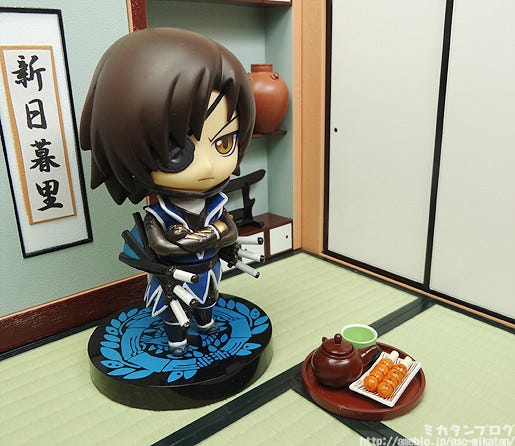 If you wait for him, the dango are going to go stale, so I suggest you eat them now! (Sorry! :P)

Hello! I am a frequent reader of your blog and the GSC Homepage!

I made use of the recent Racing Miku decals to make a Miku styled iPhone case! The picture is taken with a Nikon D3, but I guess photos come down more to skill than the camera. 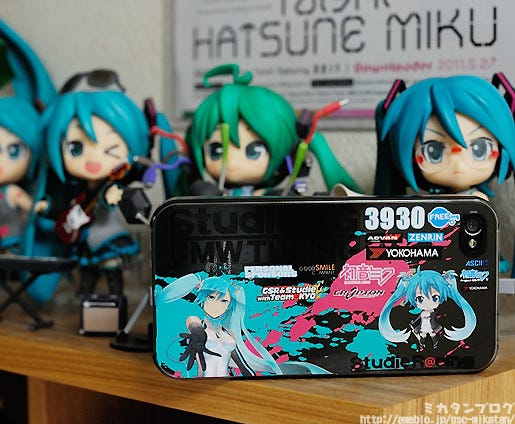 Just with itasha, sticking the decals on in an effective way isn’t an easy task, but this looks great! They’re stuck all over making a lovely colorful collage. It almost makes me want to give it a try myself!

The other day, my signed figure arrived safely!
Thanks very much! huke’s signature is so wonderful I can’t bring myself to open the box! :P

I decided I had to take a commemoration photo with my original figures!
Gold Saw is embarrassed to see how cute she is! 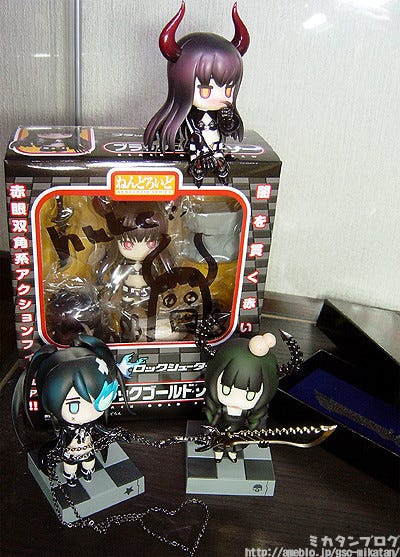 A winner from the Sumoko competition!

Golden-saw looks so cute on top there! And the heart made from a chain is very nice as well!

I know it’s sudden, but I’ve included a photo of my wife.

She is sitting beneath my rooms light and thinking about something while enjoying some snacks and coffee… She must be thinking about the lovely Madoka Magica figures that are coming out! 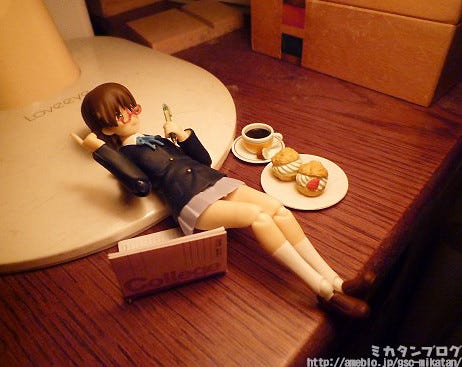 A simple everyday scene where the character seems to fit in just perfectly! She looks so relaxed… I do wonder what she is thinking about… :P

The other day I went out to the ‘Ano Hana’ sacred land – Chichibu city.
Everyone in the city was so kind, it really left a good impression on me. ^^
I can’t wait for a Nendoroid or figma of Menma! 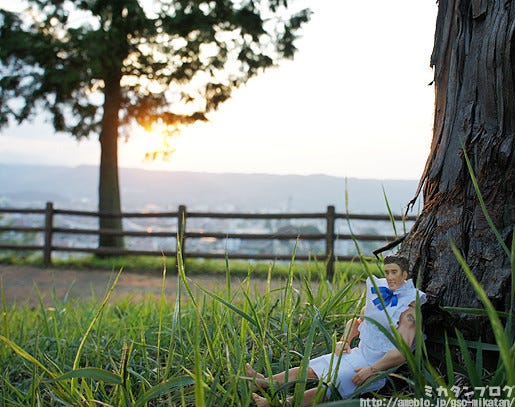 In the middle of the night, I suddenly got the idea to make a Nendoroid Lat-type Miku!

It was the first time I’d ever tried meddling with how a figure looked, so I didn’t do much, but I tried remodeling her as best I could!
I hope it encourages some others to try it as well! (｀・ω・´)ｂ 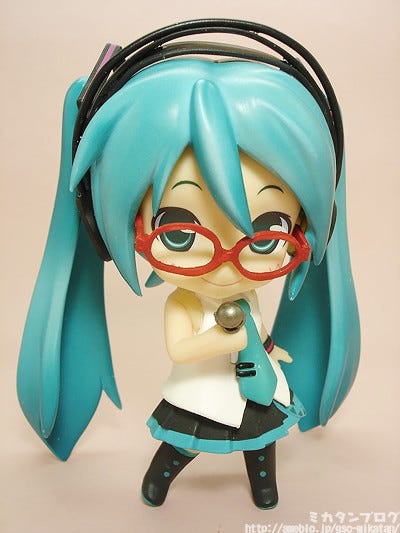 This is more than good enough! The headphones are done very well!
Officially I shouldn’t recommend remodeling figures, but it can’t hurt to try I suppose :P

On the 12th June at Akihabara UDX a Steins;Gate Festival was hosted so I took my Nendoroid Kurisu along with me.
They had the IBM5100 that the legendary IBN5100 was modeled after on display, so I grabbed a picture! ヽ(*゜д゜)ノ-! 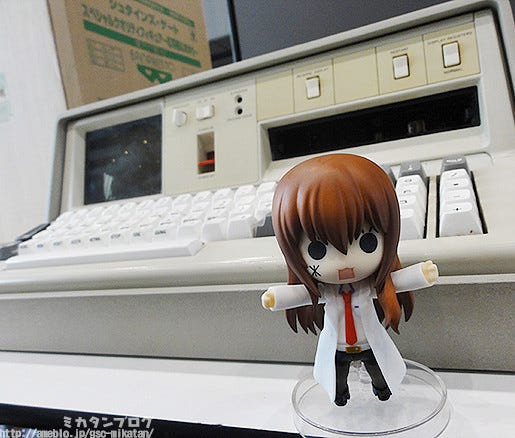 It really nice to get a photo with the real thing like this! As a huge fan of Steins;Gate I really love to see a photo like this! :D

Nendoroid Feiris is also on her way! She’ll be around to display with Kurisu and Mayushii soon!

That brings this letter corner to an end!
Thanks to everyone who send in mail!!

I make sure to read all mail that I receive!!
Plus!

I also received something absolutely incredible! 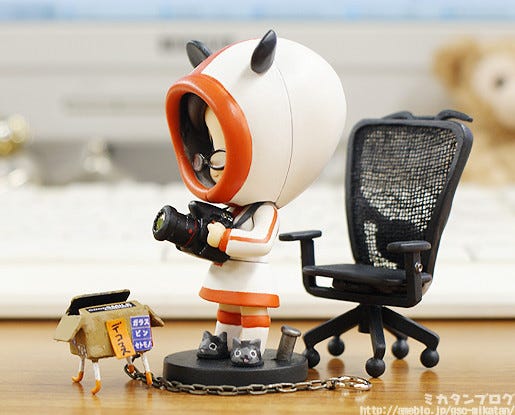 This was made by one of the blog’s readers!

It’s incredible! I can’t believe it! Thank you so much! I really couldn’t be happier!

It’s really a perfect rendition! The panda ears, slippers, even the chair and the prototype box! I honestly first thought it must have been from one of the other staff members at first! Thank you so much for reading and enjoying the blog enough to make something like this! (Just look how detailed that camera is!)

Thank you very, very much!

As always, I’m always looking for more mail from readers!
If you have any questions, photos, product requests, want to talk about what you ate today, your worries for the last 3 months this year… no matter what you want to talk about, send it through to me! Girls and boys both welcome!

Anyway, that’s all for today!
I hope to see you all again tomorrow!!