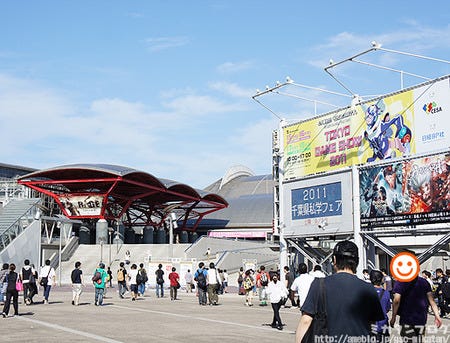 There have been so many events at the Makuhari Messe recently, that I’ve finally managed to memorize the route from the station to the event hall I’ll never get lost again now! But that doesn’t help the fact that it’s so unbearably hot!! As you can see, I went to the once-a-year Tokyo Game Show event this year on a hot and sunny Monday! 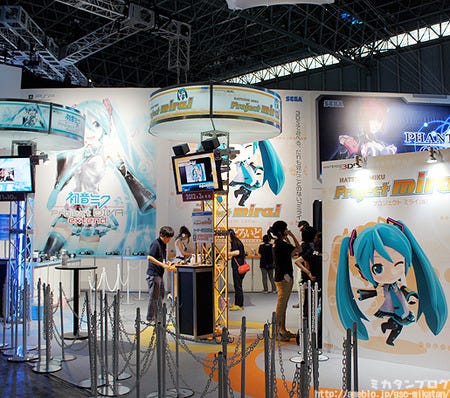 Arrival at the Sega booth!

“H-huh? There aren’t many people here…?”

Indeed – but that’s because this is still before the event had actually started! The staff is just checking everything is ready for the crowds! I’m actually here to bring a special Nendoroid Petite to the Sega stage! 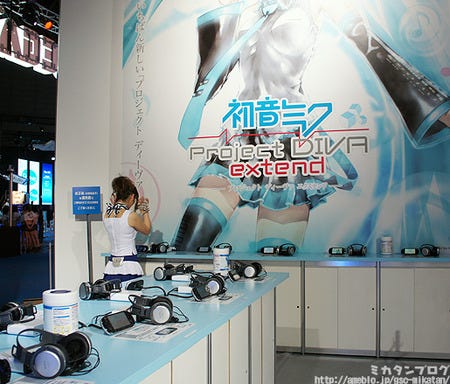 Following on the from the hit PSP game ‘Hatsune Miku -Project DIVA- 2nd’ comes extend which adds more to the system as well as adds new songs and modules! I’ve been playing the original for quite some time!! （(Although I’m still yet to finish the last level on extreme mode…) 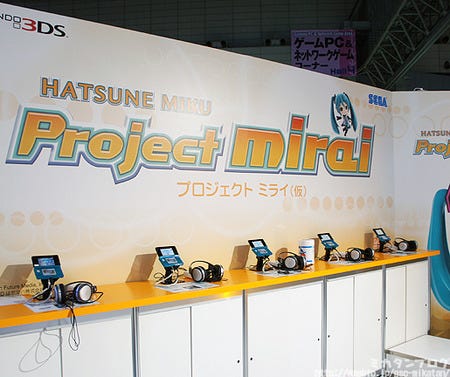 Today my focus is on this title!

This is… this is incredible! I’ve been watching the Nendoroids ever since #00, and to think I’ll be able to see them dancing and singing inside a game is just incredible! 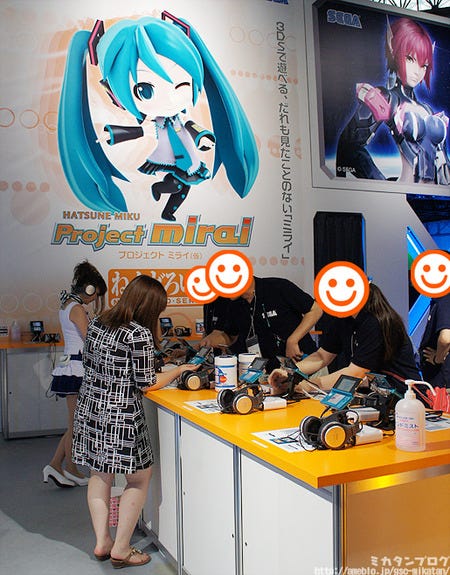 I want to play as well!!

Normally I’m a bit reclusive, but I decided to be courageous and ask the staff! Even though they were so busy with preparations they were happy to let me try it out! Yay! 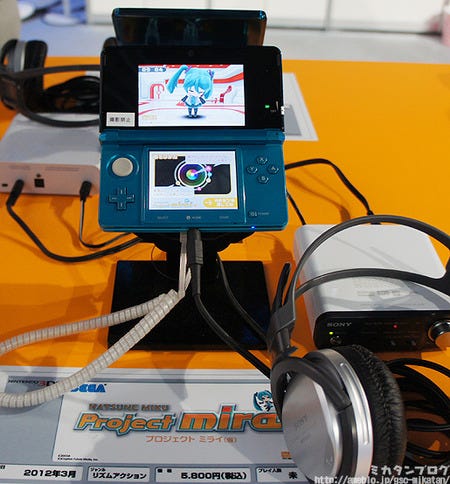 This is actually the first time I’ve used a 3DS too!
Just seeing Miku on the screen was incredible… but then when I actually played…

The game is really fun! And the Miku-san dancing in the back is so adorable!

The game is also a music game similar to DIVA, but it does have it’s differences and is fun in a whole new way! Plus it has Nendoroid Miku-san dancing in the background!! It’s really hard to decide whether I should concentrate on the game or rather on the Miku dancing!! :P 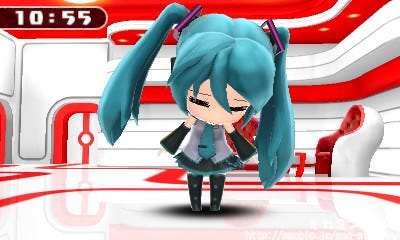 This is 3DS Miku-san!

It’s a pity I can’t get the 3D effect to work over the camera, but she is of course in full 3D in the game! You can always simply turn it off through if the 3D effects make you uncomfortable.

All the characters modelling has gone though Good Smile to get the real Nendoroid designs into the game!

The main people at GSC working on it were myself and Gakkun from the production team! They really look like the real Nendoroids!

Sega really showed what they are capable of when it comes to 3D modelling! I’m really impressed! The Nendoroid cuteness really comes through perfectly!

I came by today with this prototype to show at the Sega booth!

She will be included as an extra with Project mirai!

You can find more info over at the Project mirai website!

Eep… while I was playing around with the games…

The show had actually started! 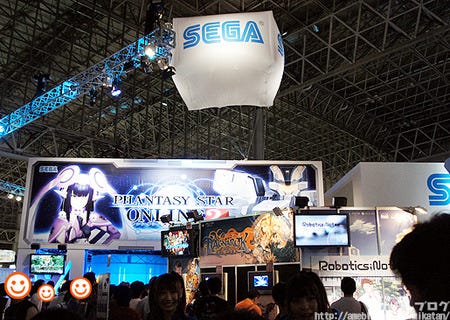 I decided I had to take a look around for myself seen I had come out all this way! My HP and MP were full and ready to take on the other booths! 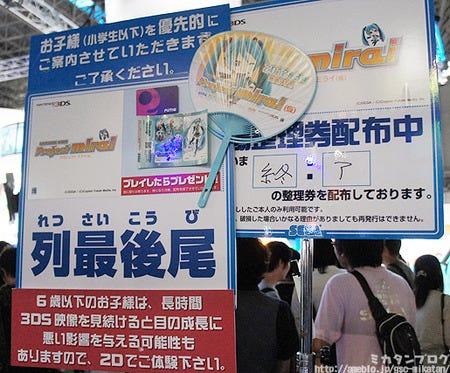 The queue to play Project mirai!

The numbered tickets had already run out… talk about popular! I’m glad I managed to get a game in before the crowds! xD 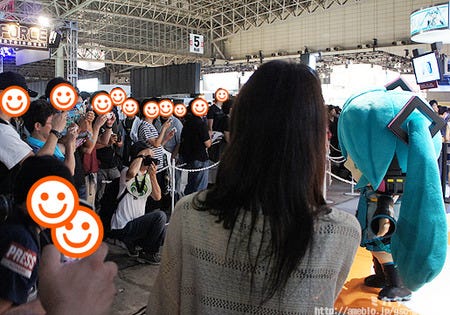 A human-sized costume of Nendoroid Miku also found its way to the event! It was huge! Apparently she will be back even better in the future! 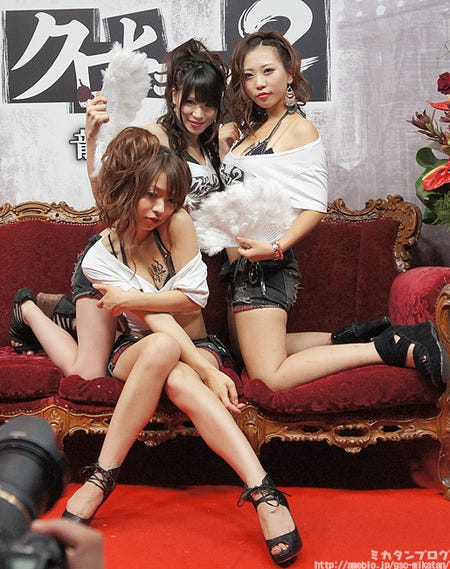 I think this photo came out wonderfully! What do you think!? I actually used up most of my HP and MP here…

I think I was the only girl in an entire squadron of guys… it look a lot of courage! :P But I just had to get a photo for myself!! 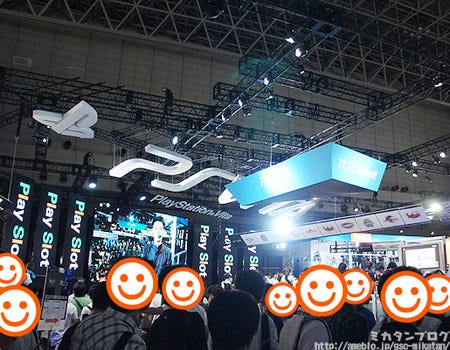 The crowds were quite exited about the upcoming Vita! I really wanted to try it myself, but the queues were just too long for me to wait in… what a pity! 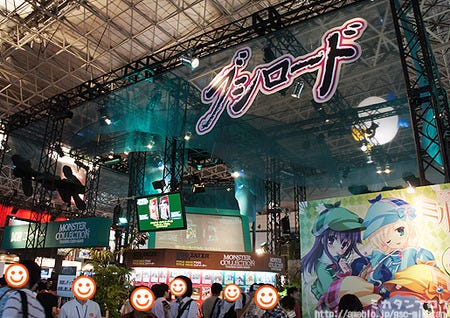 There were a load of card things going on, as well as my favorite Milky Girls! Bushiroad really went all out this year! 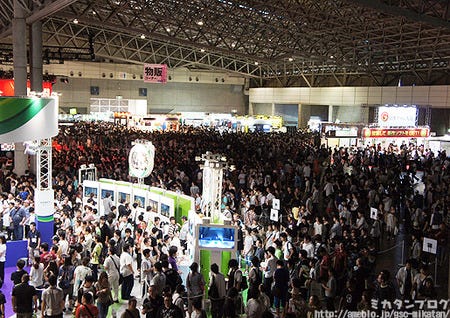 And that ends by Tokyo Game Show 2011 coverage!

Just look at the image above!

I just didn’t have the HP and MP to wade through those waves of people… just by going to the Kurohyo booth I got a status ailment that prevented me from going any further. :P

Apparently this years Tokyo Game Show reached the most visitors ever! The game industry just seems to be getting stronger by the day!