Tasshi! What are you doing!? 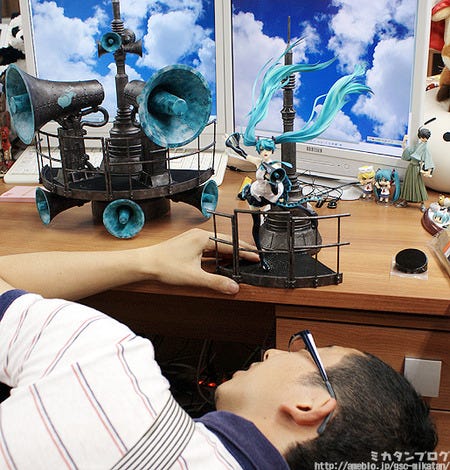 I might be giving him a bad name, but Tasshi is actually responsible for the painting on this incredible figure!

On another note – I have no space on my desk thanks to this figure! But at least I’ll finally get to take a close look at this figure – I know lots of you have been waiting for it as well!

From the popular song composed by ryo and produced by supercell with illustrations by Shirou Miwa, ‘Love is War,’  is this lovely  1/8th scale figure of Miku Hatsune! Her long flowing hair is blowing up behind her, her skirt is also flying up in the wind as she holds a megaphone in her one hand and leans over the edge of a railing, shouting out about her love! It’s a beautiful and dynamic pose that recreates Shirou Miwa’s original illustration perfectly!

Everything from the sculpting to painting – it’s all absolutely stunning!

As you can see, the base is the biggest ever! :P 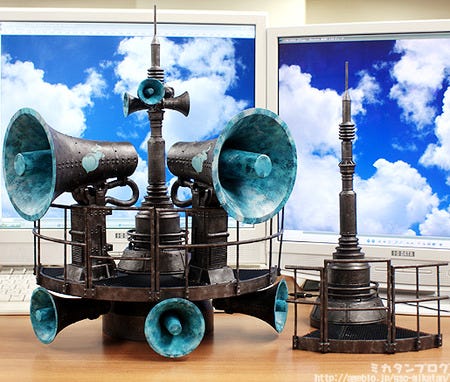 “Whoa! Hold on a sec! There is no way I’ll have space for that thing!”

…for all those worrying about that – worry not!

There will be two different sizes available for purchase! 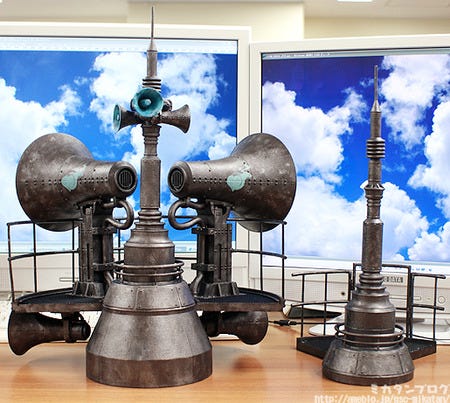 The view of the bases from the back!

It’s bigger than my monitor! :P But it’s not just big – the base is also at an unbelievable level of quality! It really looks like it was cast out of metal!! 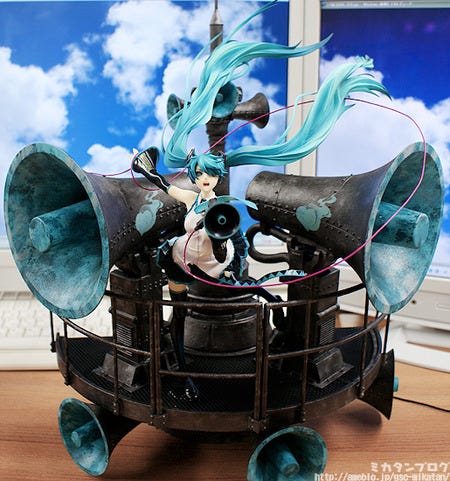 Personally I’d definitely recommend getting this one if you have the space!

This big speaker base was seen the the ‘Love is War’ PV illustration. It looked really impressive as in illustration, but as a figure you can really get a feel for its massive presence! 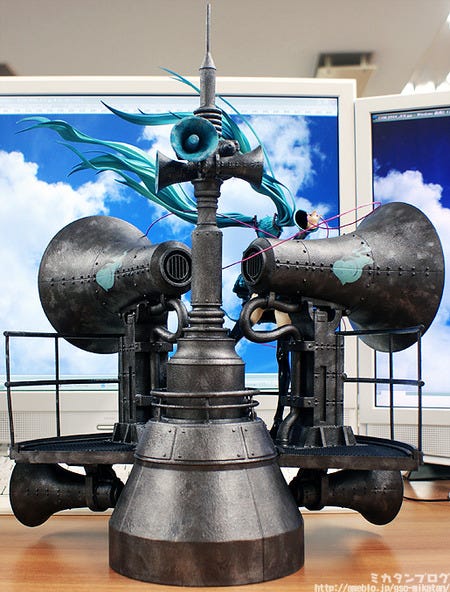 Here is a close up from behind!

If you sum them up, there are in fact a total of nine speakers on the base! 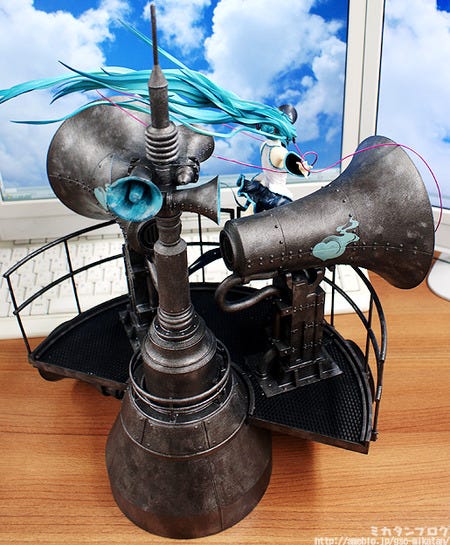 This is how it looks from above!

As you can see the actual area Miku stands on is a semi-circle – the entire circle isn’t a part of the figure, but the center of the base is not cut off at all. I don’t think it’d look half as nice if the center piece had been cut in half as well. :P 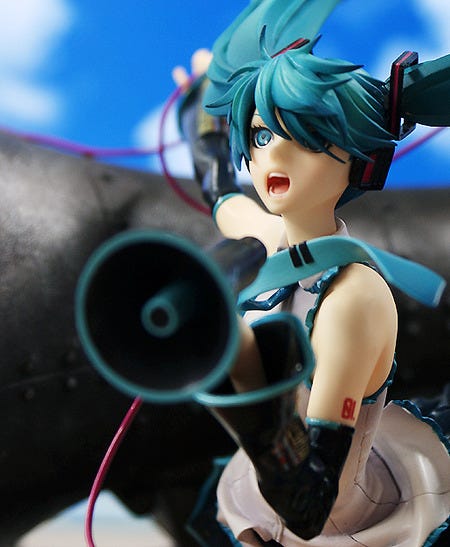 Alright, let’s move onto the actual Miku figure!
Look at her wonderful expression! 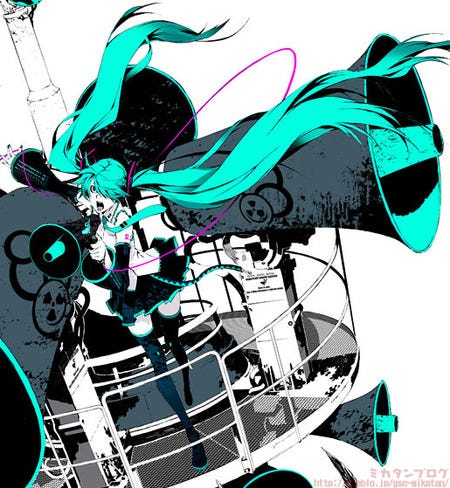 The original illustration by Miwa-san!

The contrast looks so beautiful! The pink and the green come out so nicely with to emphasize parts of the illustration! The figure is made to look exactly like the illustration, so fans of Miwa’s work should definitely enjoy it! 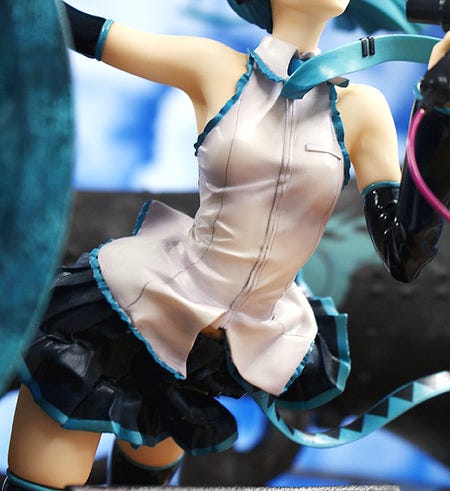 A look at her wonderful outfit!

I love the way everything seem to be flapping around! And look at that belly-button!!! She has a nice tight waist-line while flows down to her hip-line, which is just as gorgeous! 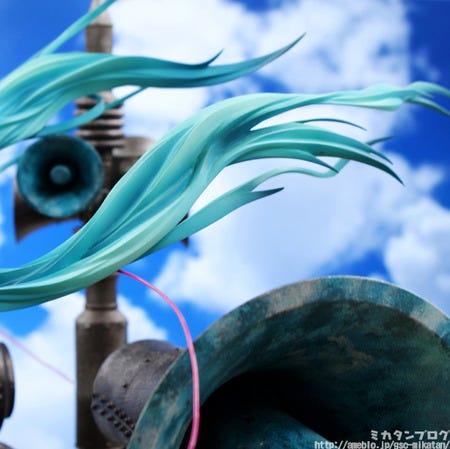 Miku’s hair is definitely one of the highlights of this figure. A large amount of gradient painting is used to help recreate the contrast experienced in the original illustration. The twirling together of blue and green really looks great together! 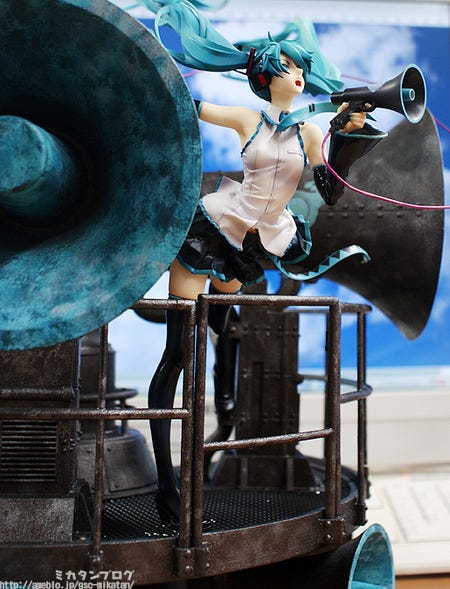 This is how it looks from another angle!

Those huge speakers together with Miku! You really get a feel for just how big the speakers are when you compare them to the size of Miku. :P 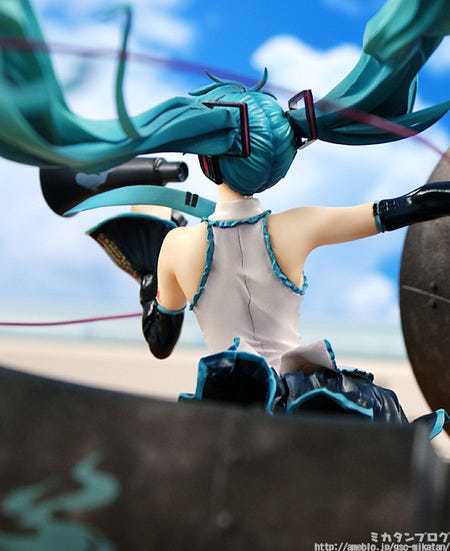 I couldn’t put her whole body in because of… well… because of the way her skirt if blowing up :P You have to see that part for yourself! She really does have a nice body – just look at that sexy looking back! 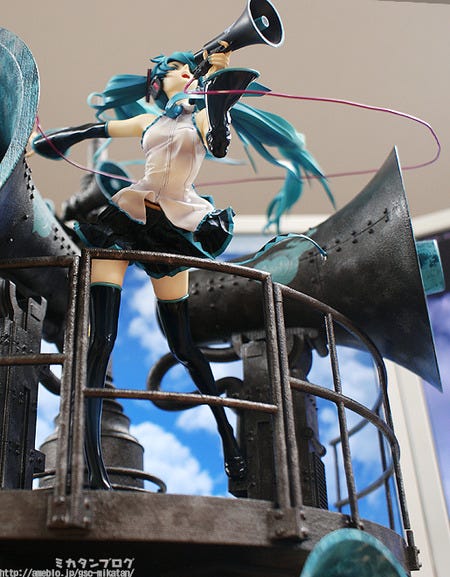 The stand really compliments Miku’s colors so nicely, creating an all-in-all gorgeous figure! Normally I don’t do low-angle shots like this as they will often make figures look a bit strange, but this is one figure that really looks absolutely incredible no matter what angle you look at her from! 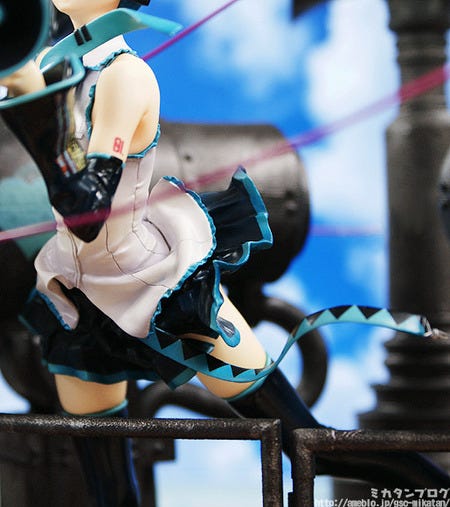 Look at those thighs!! 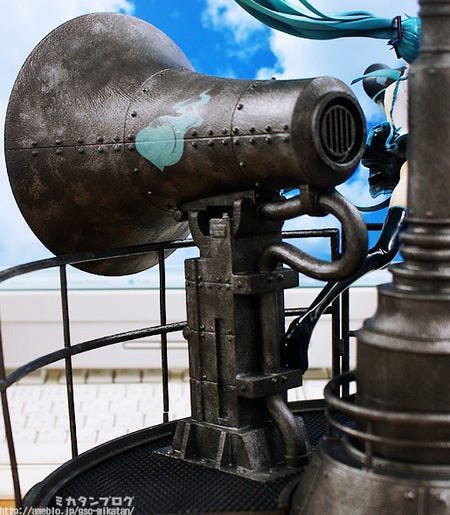 The other side of the speakers!

It looks like a real speaker has just been shrunk down to figure size!! For those who are interested – the base is made using 3D data! It really is a perfect example of what amazing things can be done with 3D data sculpting! 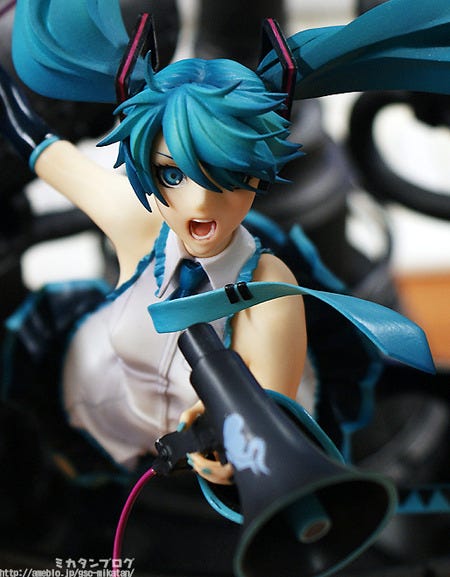 These are the lyrics of the song that the figure is based on – this is also my personal favorite image for today! If you haven’t heard the song you can listen to it over here: 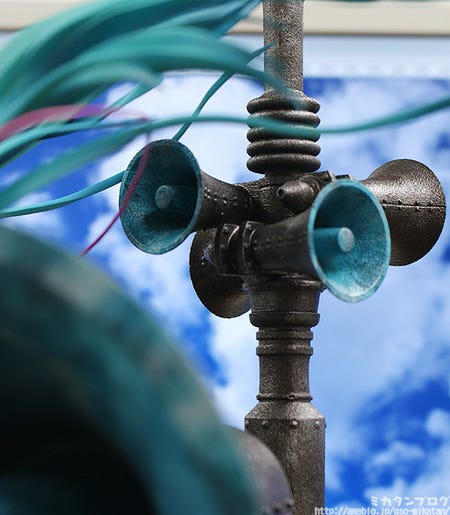 Even inside the speakers there is a texture!
The inside of the speakers uses coloring similar to Miku’s – it all works together very nicely! The texture is not just painted on, it’s actually there when you feel it as well! I think this must be the first ever figure with a base that goes into such detail… it’s simply outstanding! 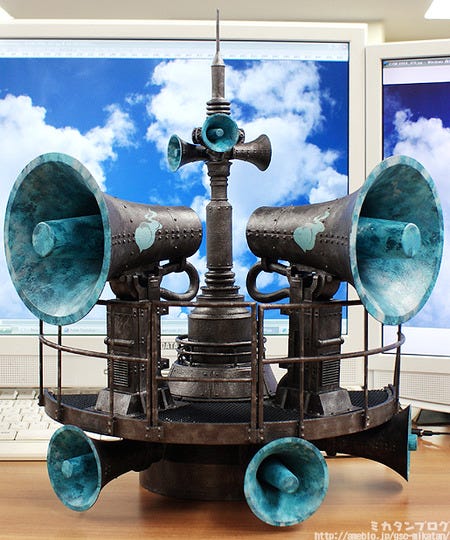 Another look at the DX ver.’s base!

Based on the monitor and keyboard in the background you should get a fell for just how big it is! Plus I’m sure you can see that even though it’s big, that by no means the quality will be bad. I know I’ve already said it, but I’ll say it again – I definitely recommend getting this version if you can! It’s incredible!

She is already up on the GSC site!

A quick note!
The purchase methods between the normal and deluxe version are different.

I’ll be doing a quick review of the standard version shortly!