Oi! Tasshi! What are you doing!? 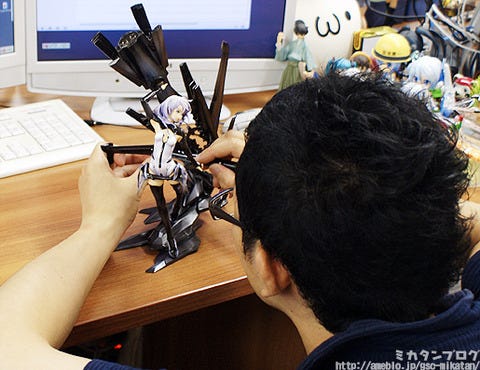 That’s not something I would expect from you!!

What are you doing to that poor figure! I think the bad influences around the office are getting to him…

It might look like he is doing something indecent… or painting in that photo, but he is actually just using a tool to fine tune the angle that the figure is displayed at… I was so close to hitting him over the head as well… 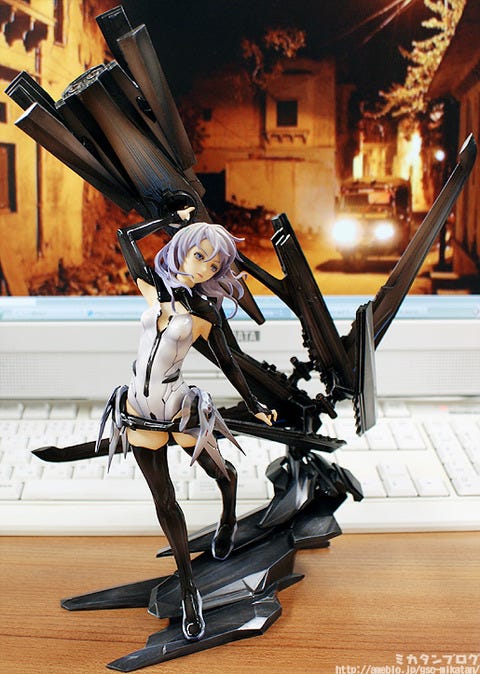 From ‘BEATLESS’, currently serialized in Newtype:

BEATLESS is a short novel that is being written by Satoshi Hase and illustrated by redjuice. This figure if of one of the main characters in that story, the female hIE – ‘Leicia’! 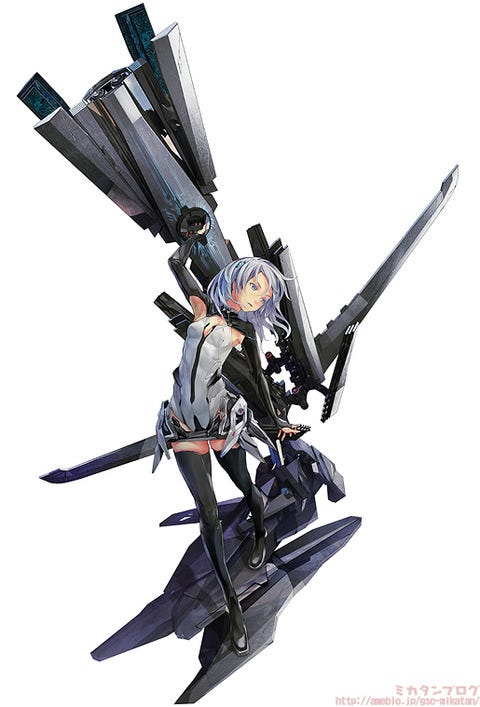 Yep! This is the original illustration!

You can see just how similar the illustration and the figure are! ((((;ﾟДﾟ)))) 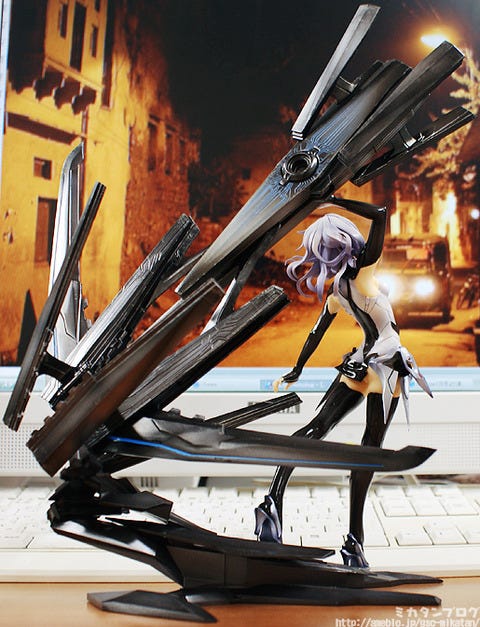 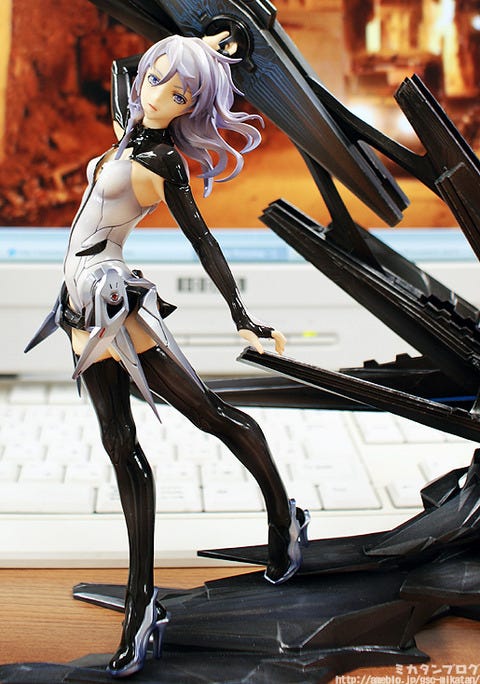 A close up of Leicia-chan!

The huge device that makes up the stand does stand out a lot – but by no means does that make Leicia herself less incredible! Her whole body – hips, even her boots all have gradient painting!

Plus she is really sexy!

She isn’t showing much skin, but the little bits that peek out are really something! 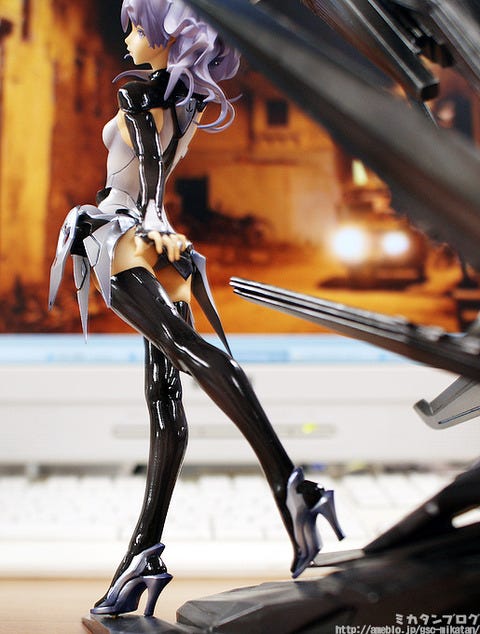 don’t really like taking photos like this that show only half a figure’s face, but Leicia is beautiful at any angle! I beauty is a beauty no matter how you look at her!! Plus this angle gives a good look at her hips and the unique outfit around them – it’s quite big! 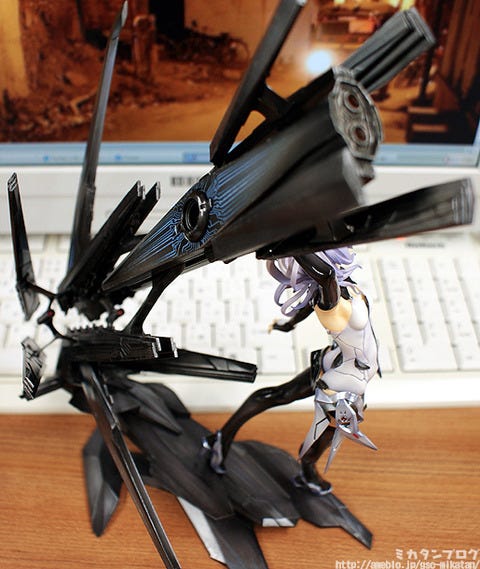 A look from above!

Oooh! The pose really works nicely for a shot like this! By the way, I have no idea what the huge device behind her is… but I’m sure we’ll find out in the story soon….?

Eeeh! that’s not fair!
In the end, all that has been decided is that we shall call it the ‘Device’! :P 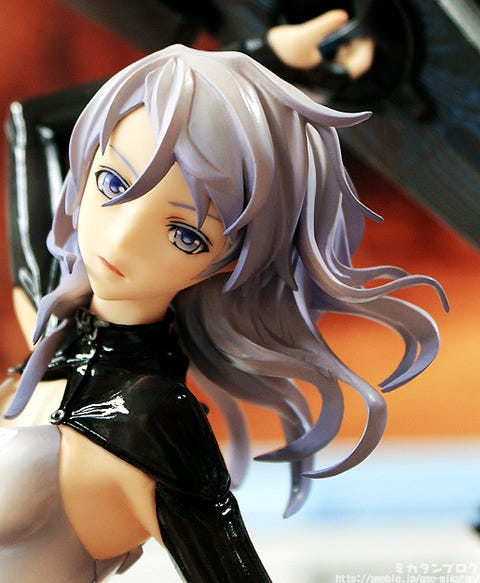 Such a relaxed expression!!

I’m super impressed as always with the sculptors and painters – they have really captured redjuice’s illustration perfectly! It’s also really lifelike – just by changing the angle ever so slightly the expression looks so different – it was really difficult to get the right photo!! (albeit, I’m not so sure lifelike is the right word, seen I’m not sure if Leicia is really alive… :P) 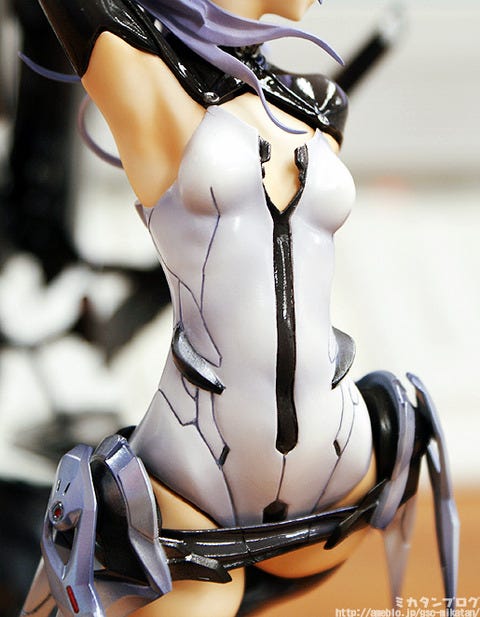 I think the main contributions to her sexy look are her armpits and the area between her breasts… it’s probably because they are fairly rare places to see on a figure. When you suddenly get to see them on a figure they are all the more compelling to look at, don’t you think? It’s really hard to pin point just why she looks so sexy though!! 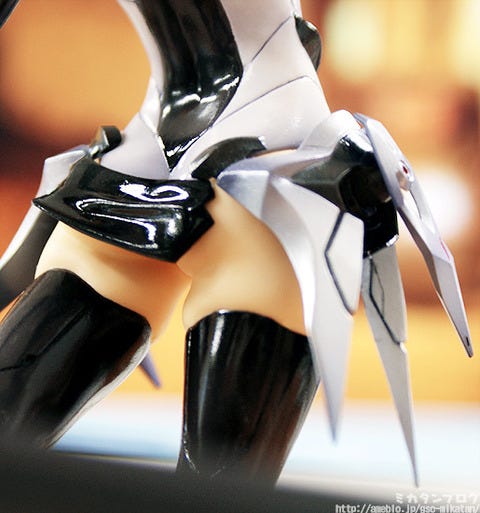 And of course the service shot! 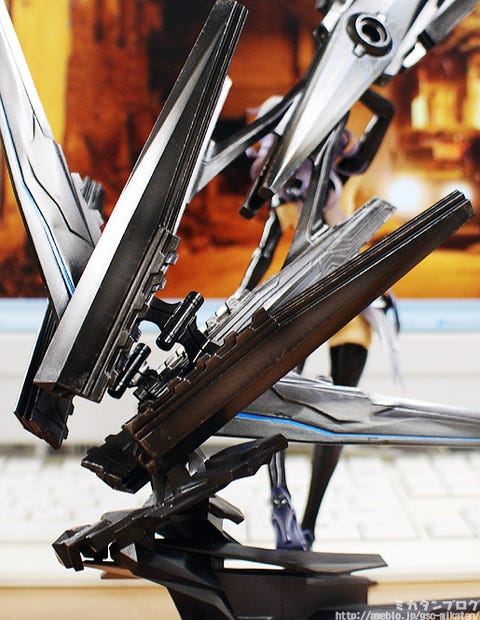 The device has a little secret of its own!

Take a look at the wing-like part with the blue line on it.

This part opens and closes!!
It can open and close to any point, so you just need to find the point that you want to display it at. 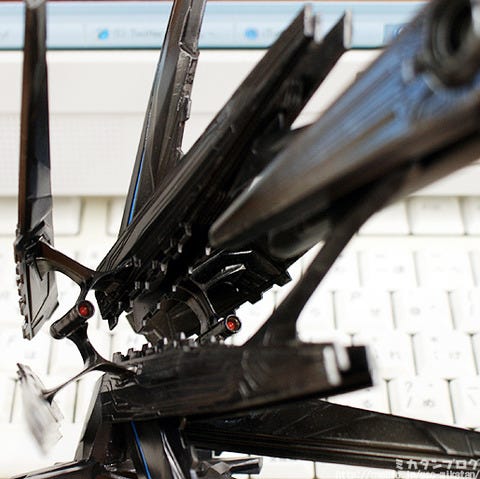 A closer look on the inside of the device!

The incredible thing is, the device is made using 3D data that redjuice made himself!!

Obviously the final brush-ups were done by the 3D team, but to think the design was done by the illustrator himself!! This is one of the first times that the 3D model was actually used to help draw up the 2D version! ^^;

The inside of the device was also all done by redjuice!

From ‘BEATLESS’, currently serialized in Newtype:

The figure is part of the ‘BEATLESS Introduction Set’, which also comes with a special guidebook which features a prologue to the novel, a list of terminology, various illustrations, character designs and more!

The set will be on the GSC tomorrow!

Preorders and sales will be done via the GOODSMILE ONLINE SHOP.
Read below for more info:

■ Orders must be made by 22nd August 2011 at 21:00.
■ Five figures per person will be available.
■ Payment will be via credit card or PAYPAL. For more information please see: http://goodsmile-global.ecq.sc/help
■ Shipping will be charged at 2000JPY to all countries.
■ You may be charged additional fees such as customs duty and import tax when buying from Japan. Please be aware of this before ordering.
■ Payment will be in Japanese Yen.
■ Please mail shop.overseas@goodsmile.jp if you have any questions. English only please.