So many product releases! ━━━(ﾟ∀ﾟ)━━━ﾝ !!!! 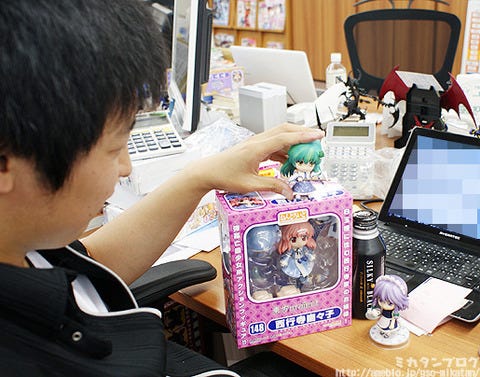 Take-chan is watching over them as they are released!

I much prefer my coffee with milk… 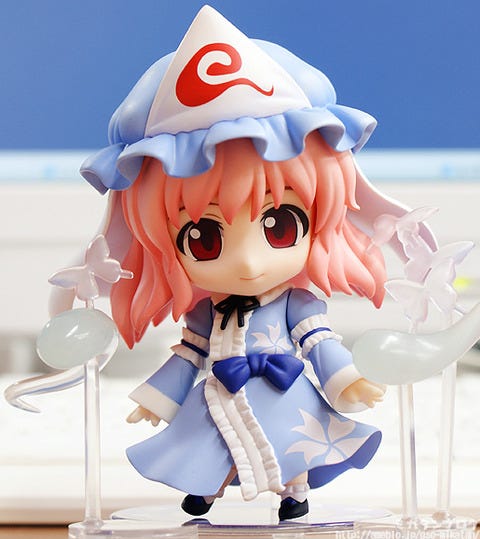 The 8th Nendoroid from the Touhou Series:

She is the master of Hakugyokuro, the Netherworld Tower, from the popular doujin series of games by Shangai Alice – the Touhou Project!

She has the power to control spirits!
Which as you can see, are included for her – using beautiful clear plastic for a more ghostly effect! 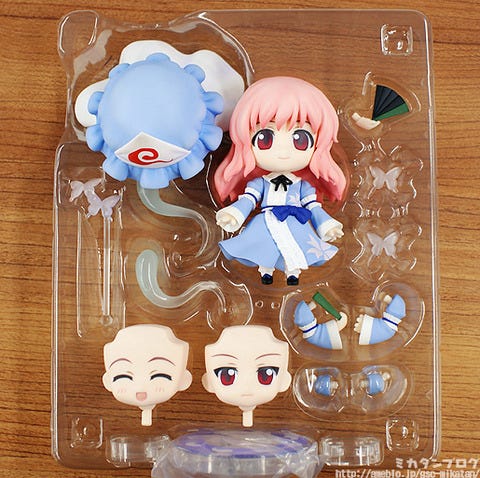 The spirits and hat take up a load of space, but as you can see she also comes with a load of other extras! At the bottom of the blister pack you’ll find two see-through stands for the spirits – they can go missing very easily so watch out for them when unpacking the box! 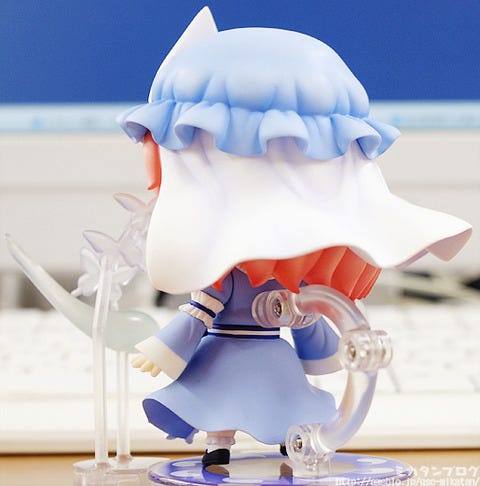 As with all the previous Touhou Nendoroids – the stand has a print of the a motif based around the character, but Yuyuko makes use of one of the arm-type stands – it works nicely for her as it means you can pose her floating through the air! 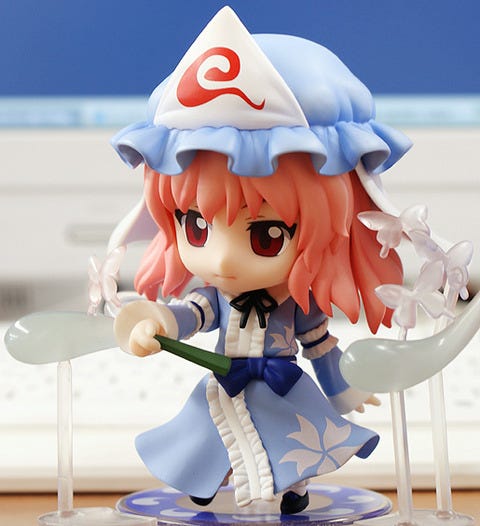 Right, let’s move on to the optional parts!

First up, a contemptuous face!

The eyes look so much more focused and serious on this face, it’s a wonderful change!

Plus in her right hand is a closed folding fan!
The hand part holding it can be removed, so you can use it with the other arms as well! 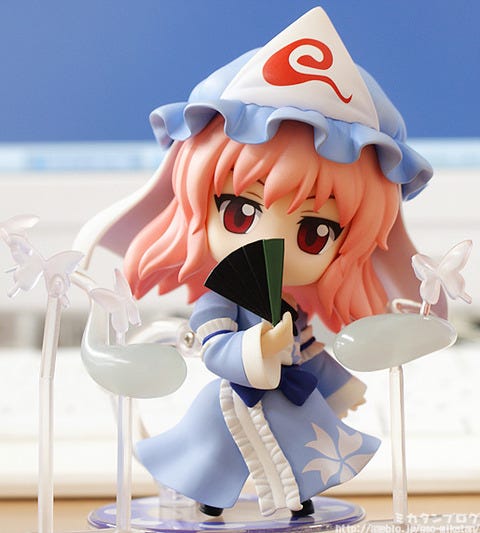 Plus she also comes with an open folding fan!

Which just like the closed one can be used with any of her arms.

After playing around with her for a little you’ll realize just how well made she is!! Σ（・∀・ ）
Just look at the coloring and design on her kimono – it’s absolutely beautiful! Plus she is a load of fun to play with! 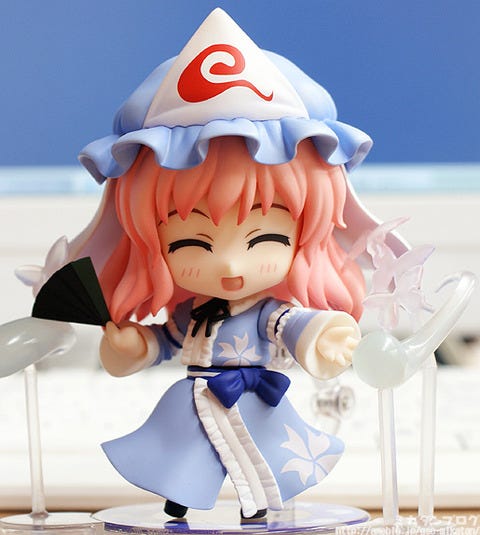 She also comes with an innocent smile!

She looks so happy! I also like her eyebrows – they’re kind of thicker than other characters which gives a nice fresh feeling!

These are so that she can extend her arms out horizontally – they are included with the intention of recreating one of the official images which has both her arms our straight, but of course you can also display her with just one out like above! 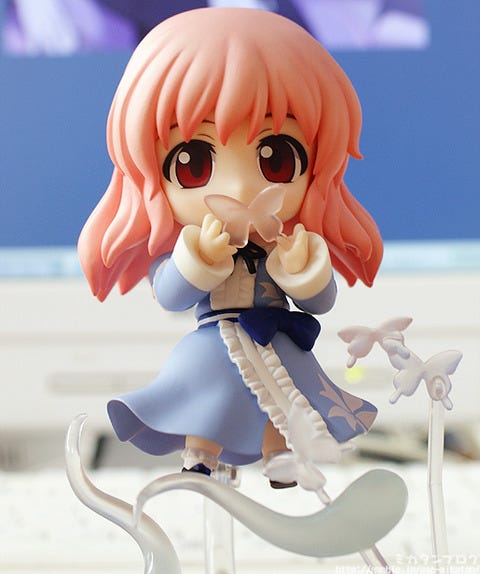 She can even hold the butterfly spirits!

For this pose, a ‘butterfly holding’ hand is included!
Obviously you can switch the hands and arms around for all sorts of interesting poses as well – be sure to try and come up with your own! 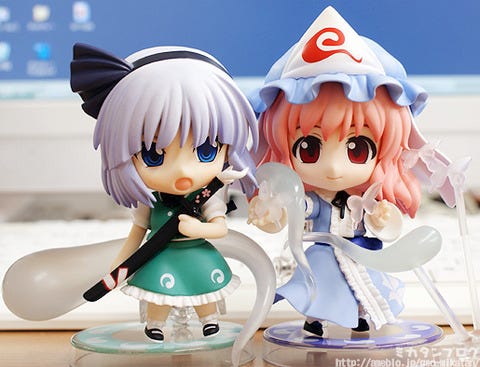 Another one of the residents at Hakugyokuro!

Ah, by the way – you can see Yuyuko is holding another butterfly in her right hand here, but I’m actually using double-sided tape for that one. I think she’d look good holding an onigiri as well. ^^; 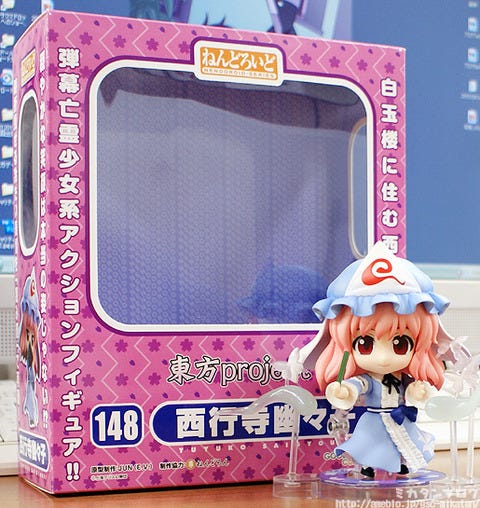 The 8th Nendoroid from the Touhou Series:

Anyways, that’s all for today!
I hope to see you all again next week!  (・∀・)ノ゛