The production team have come for a visit! 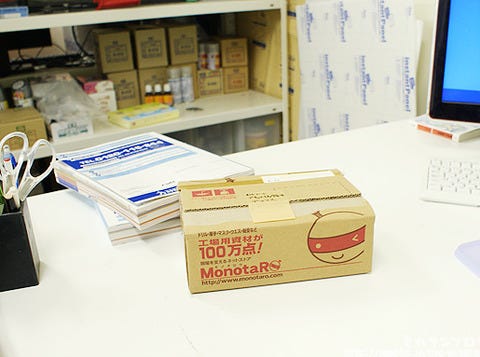 In the new offices, the production team are located on the 6th floor while everyone else is on the 2nd floor. It’s a lot of effort to visit one and other! :P

Although, there are treasures to be found there, so if needed I’d even dance up to the 6th floor! ^^ 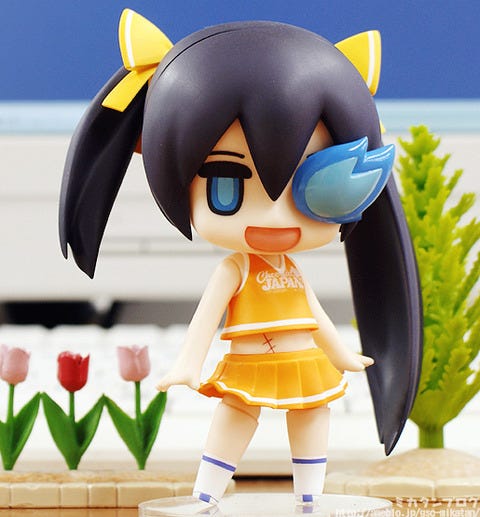 Anywho, today they brought me a new master figure to play with!

As you may have guessed from the “Support Ver” in her name, this is this month’s Cheerful Japan! product!

To support the relief efforts up North, we will be announcing a charity product every month on the 11th, starting with this month and continuing for a year!

She is a character from the browser game on NicoNico Douga titled ‘Puchitto Rock Shooter’ – a spin off of Black Rock Shooter! 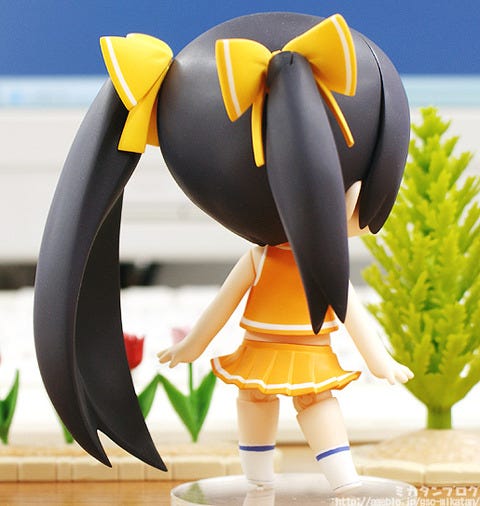 She is wearing a lovely orange cheerleader’s outfit!

It’s the perfect outfit for a cheerleader – it shows off her body nicely, and her twin tailed hair adds an even cuter feeling by having the two sides at different lengths! 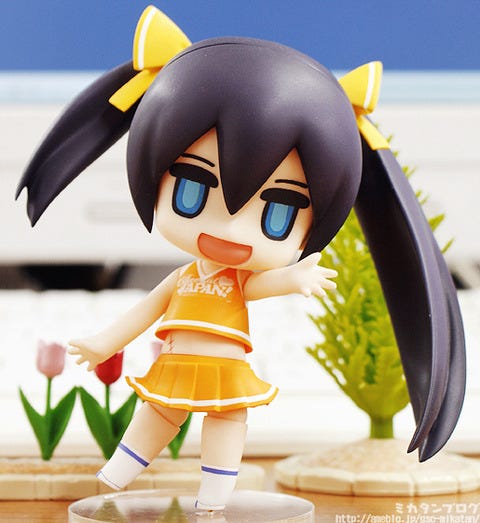 The flame on her eye can of course be removed!

The character design for this character is CHAN x CO, who has become quite famous in the Nendoroid world now! She also designed the cheerleader outfit!

I love the way her stomach sticks out like that!
That sleek body line is absolutely beautiful! 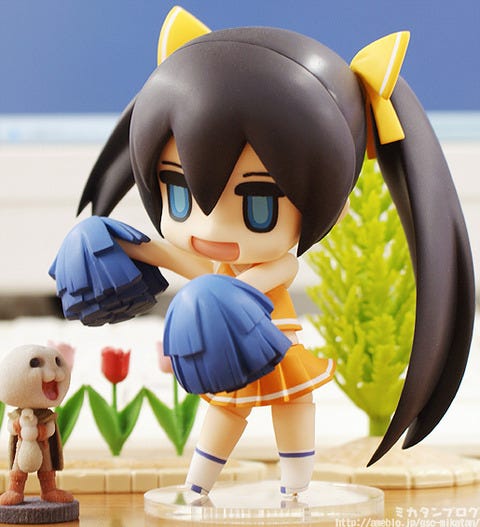 Let’s move on to the optional parts!

Blue pompons and hands to hold them!

Blue pompons to suit her blue flame and eyes! The shape of the ponpoms is the same as the ones used for Support Miku, so they should look good displayed together.

However everything was sculpted from scratch!

The staff from planning to production are all determined to bring the best of quality for the Cheerful JAPAN! series! 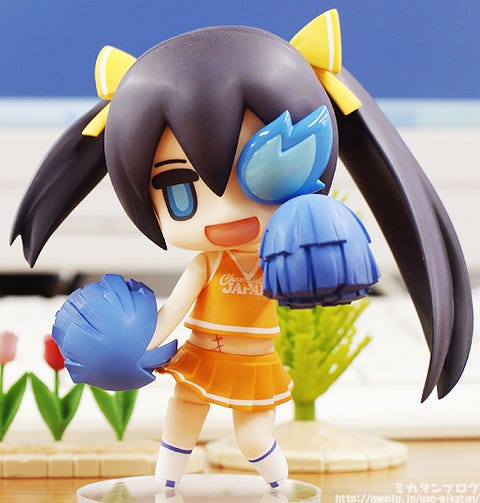 It really gives a dynamic feeling, like she is really waving the ponpoms up and down! I really love this picture, it’s so cute! :P 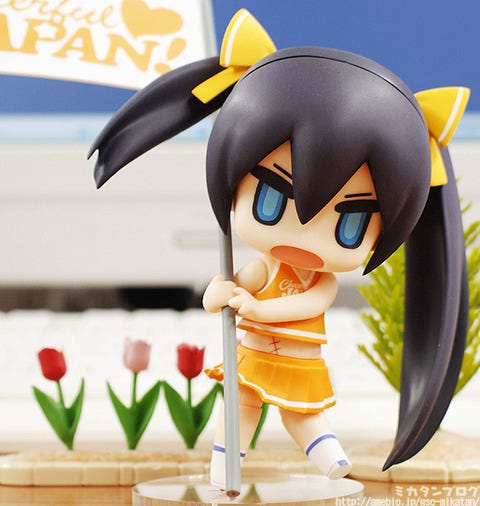 She also comes with an upset face!

She looks so angry… yet it’s still so cute!!!!! xD
The way her mouth is all circular is just like CHAN x CO’s illustration – perfect! 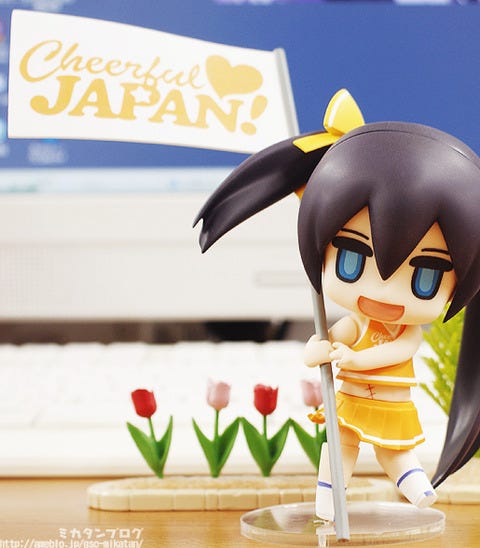 A support flag and arm to hold it!

The flag has a nice big ‘Cheerful JAPAN!’ logo on it and can be held using a special arm!  She’ll be waving the flag in hopes of bringing more hopes to those in Japan! 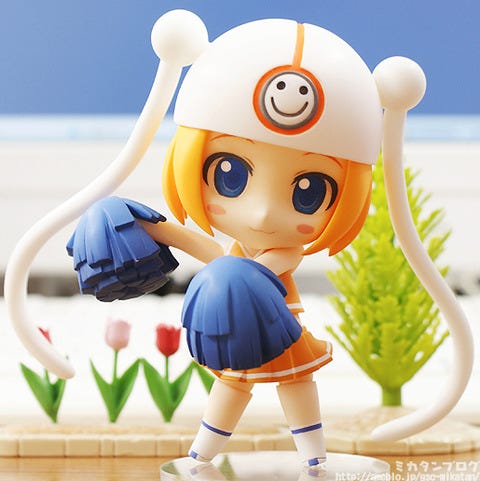 The body can be used for other Nendoroids!

As you can see the colors suit Nendoroid Gumako really nicely! As a side note – there will be more figures wearing the Cheerful JAPAN! cheerleader outfits in the future – but the designs will all differ slightly, allowing you to find the ideal one for you! 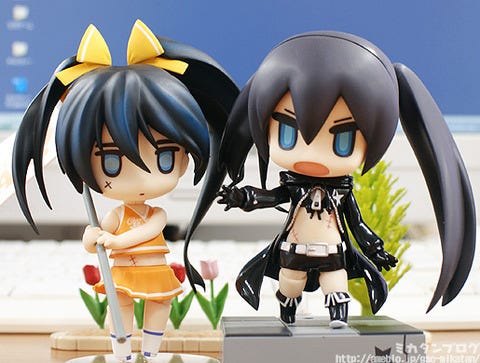 The ribbons in her hair can be removed! You can even put them on the normal BRS Nendoroid (left) – but you’ll need to change the joints around. 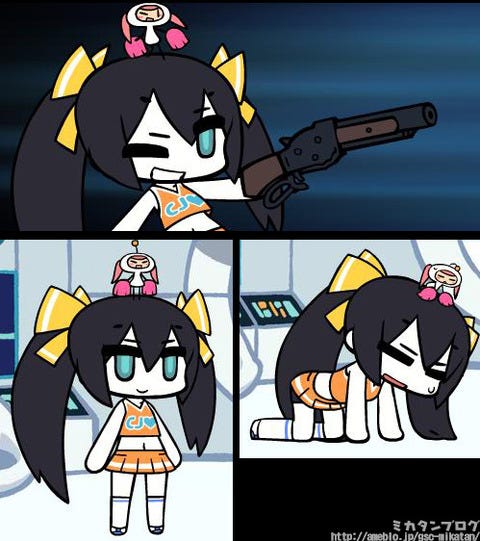 IMAGEEPOCH will be releasing this outfit on the JRPG Official Site from the 16th June – free of charge!

Even those of you who have just started playing Puchitto Rock Shooter will be able to pick it up easily – just stop by the JRPG Official site!

She will cost 3000JPY with free shipping within Japan. For each unit sold, GSC will be donating 1000JPY to the relief efforts!

Orders will be made to order, so if you don’t order within the timeframe you’ll miss out! But you’ve got lots of time, so order when you’re ready!
For those in disaster areas whose addresses are likely to change, note that you can contact us to change the address at a later stage.

Those ordering, please take note of the following: