What is that piled on top of the figma Riders…? 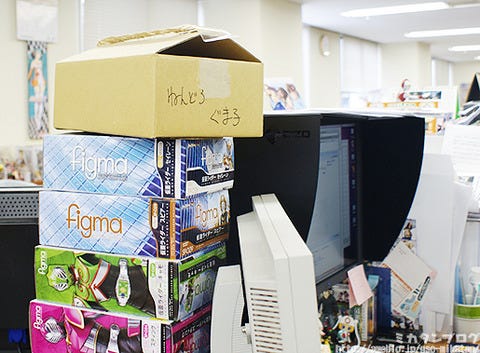 The figure has actually been displayed at a couple of events already, but now it is finally being released as the first figure in a series of products – those of you who were at the 10th birthday will already know, but that series is…

To support the relief efforts up North, we will be announcing a charity product every month on the 11th, starting with this month and continuing for a year!

The first ‘Cheerful JAPAN!’ product, is… 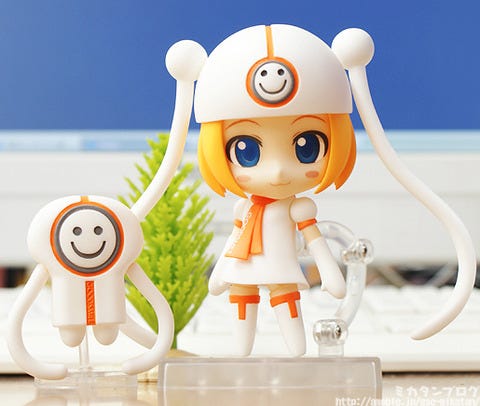 ・ She was once a show girl for ‘GSC Udon’ at a udon shop in Matsudo.
・ She had a side job working as an announcement giver for GSC.
・ The things on her head are ‘udon’.
・ She gives depressed people some of the udon to cheer them up.

She sometimes eats them herself too.

Gumako once ran out of energy and collapsed only to be saved by the owner of an udon shop. She then realized the power that udon has at cheering people up and giving them energy, and named that ‘Udon Power’. 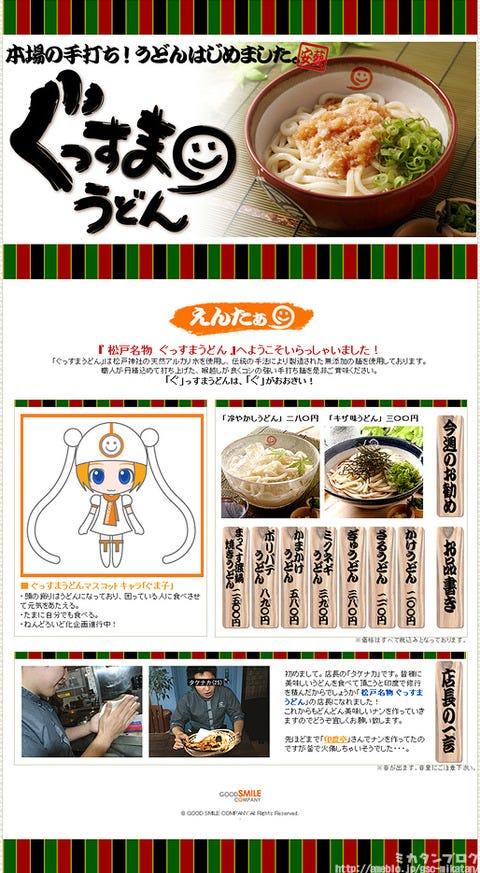 Gumako was born as an April Fool’s joke!

Even through she was only there for one day, she was very well received and has now become GSC’s mascot character!  A lot of people have been asking for a figure of her, and it has finally come!

Plus it’s the first in the ‘Cheerful JAPAN !’ series! Gumako! 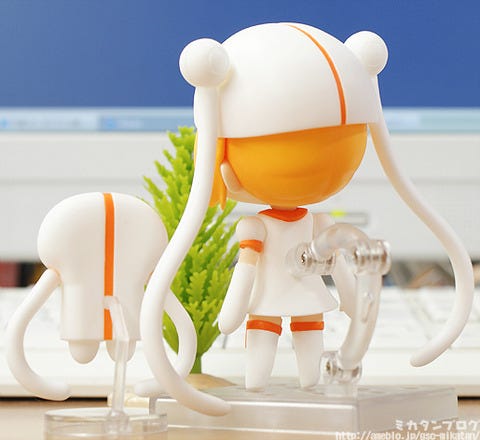 Her wears a pure white outfit, boots and gloves. It’s a very simple design, but it still looks great! The little orange stripes are also a nice cute touch – the Good Smile color!

The Udon on her head are also posable! 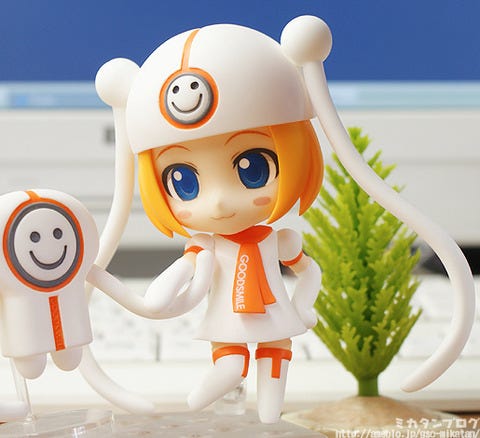 As with all Nendoroids she also comes with optional parts!

You can make cute poses like this one by using these parts! Plus just look at those puffy sleeves… they’re adorable! 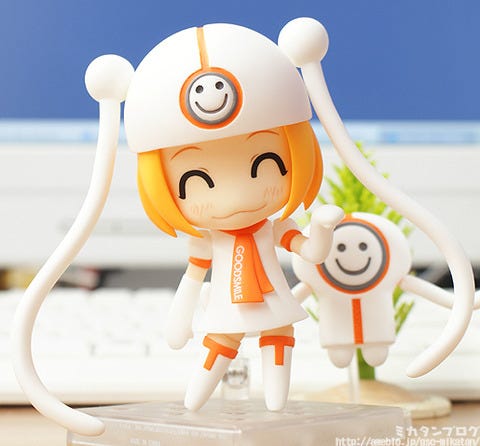 She comes with an udon face!

This is the first time we’ve seen this expression!

Definitely an expression with a unique feeling about it!! Just by looking at it I feel a little relaxed and happier! I think this might be love! 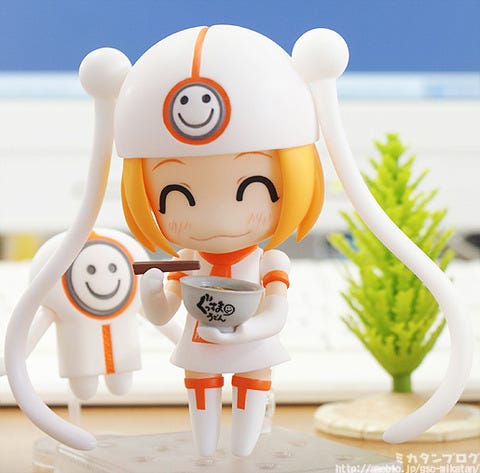 Udon, chopsticks and arms to hold them!

It shows you just how happy she is when eating udon!

This is what she calls, ‘Udon Power’!! 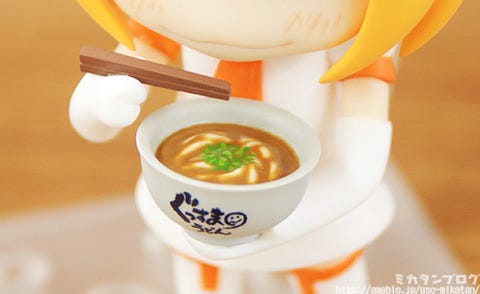 You can’t really see that well in the photo, but the quality is really astounding! I’m certain the sculptor must also make the food models you always see outside shops! 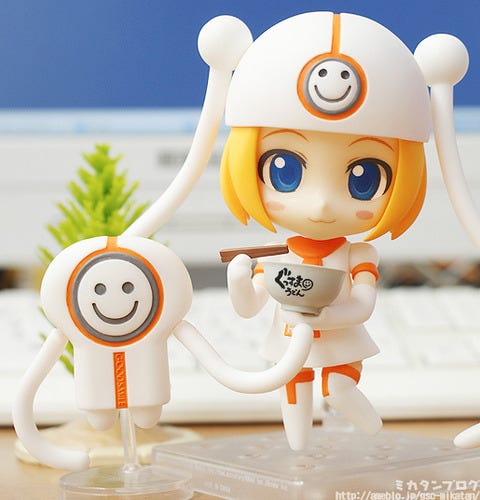 That’s all the bonus parts for Gumako, but as an extra bonus…
She also comes with a mini-GSC Seijin Mascot!

You see this mascot all over GSC things, so he has been included in Nendoroid Petite size! His two arms (tentacles?) are also fitted with joints for some posing! 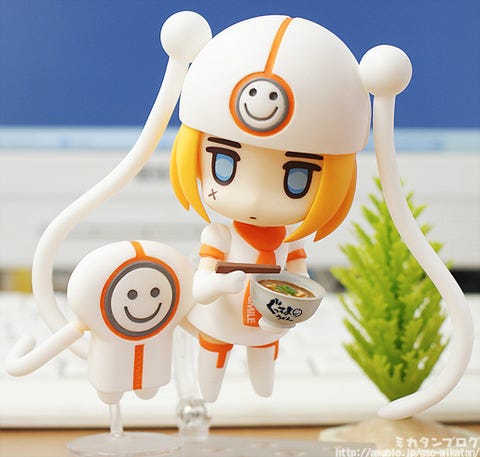 This is the BRS Chan x CO face! It’s still undergoing a few changes, so it might change, but at the moment she is very compatible with other expressions!

For every purchase made, GSC will donate 1000JPY to the Japan Red Cross Society!

The products will be made to order, so don’t worry about rushing to order – just make sure to get your order in within the time limit.

Please take note of the following if you wish to order.

The second product in the Cheerful JAPAN! series has already been created!
It’s a Giant Plushie of the GSC-Seijin!

The price will be a bit steep at 15,000JPY, however we will be donating 5000JPY of each sale to the Red Cross. It’s like GSC has become a Red Cross society of it’s own! I’ll be going a review tomorrow, so look out for it!

That’s all for today.
I hope to see you all again tomorrow! (・∀・)ノ゛

(Please note the Gumako figure is still under development and may undergo some slight changes before release.)