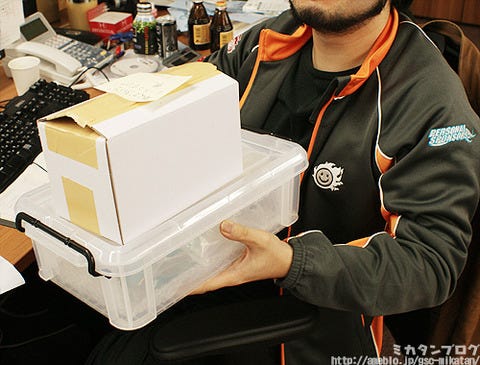 It’s quite hard to start a conversation with him at first, but once you get to know him he is a very nice guy! He has helped me out a lot at the register during events before! Thank you, Yama-chan!

Plus he has brought me a new figure to play with!

What a loveable soul…! I’ll have to get him something next time! 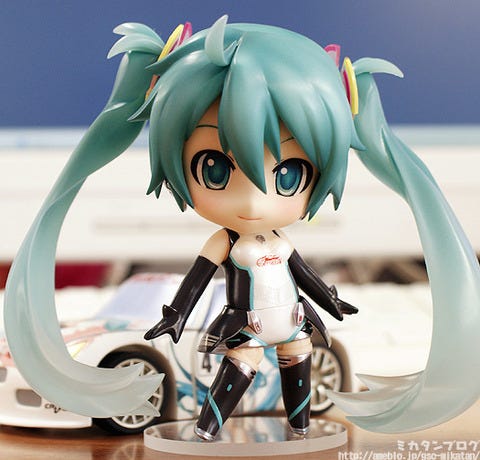 Racing Miku is a character based off the original Miku that was created specially for the GT Project – and now she is joining the Nendoroid world again with a new design dubbed the ‘2011 ver’! 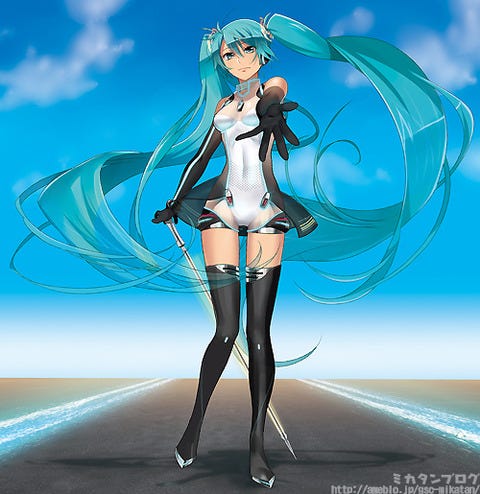 It’s the third design of Racing Miku so far!
This version was illustrated by YuiichiMurakami! 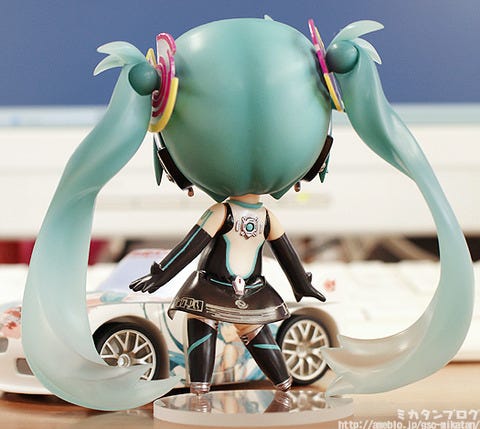 The way that her design keeps changing is a lot of fun! I think the highlight of this version is the beautiful gradient in the hair…

We’ve used clear plastic to recreate the effect on the Nendoroid!

Her hair, skirt and hair accessories all have a transparent effect to them just like in the original illustration. Even the patterns on her skirt have been carefully painted in! 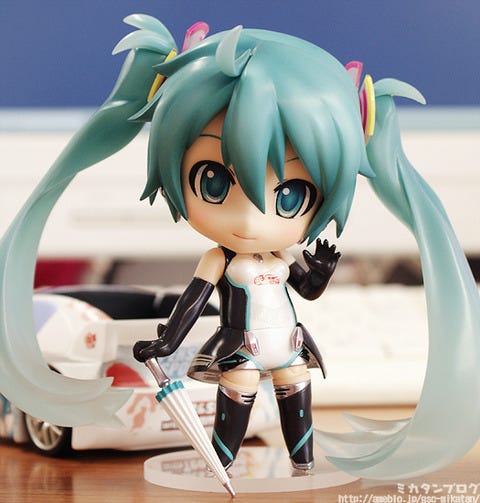 Right, let’s start taking a look at the optional parts!
A closed parasol and a bent left arm!

Racing Miku is of course a race queen – she has to have a parasol!! Wouldn’t you love to see Miku like this on the track? 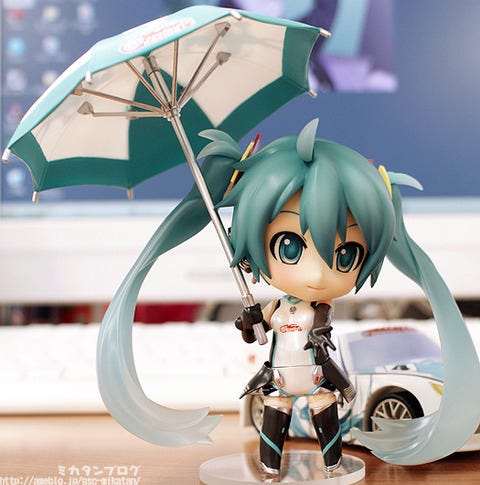 An open parasol, and an outstretched left arm!

Racing Miku is a race queen! She has to able to open her parasol!! Plus it looks great – even the inside of the parasol is incredibly detailed!

She obviously also comes with the arms and hands to hold the parasol! 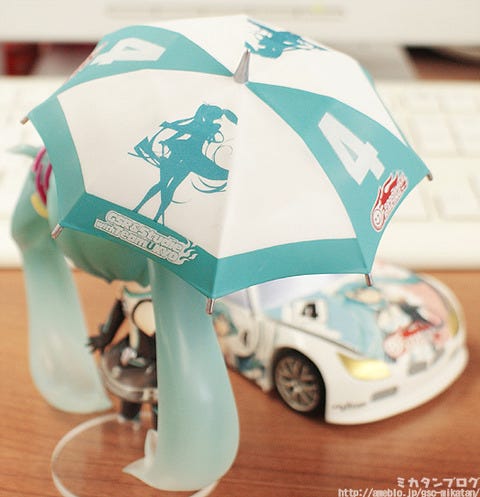 The parasol has a nice pattern on the top!

It features a silhouette of Racing Miku along with the logo! I really think this is going to be one Nendoroid to be remembered! 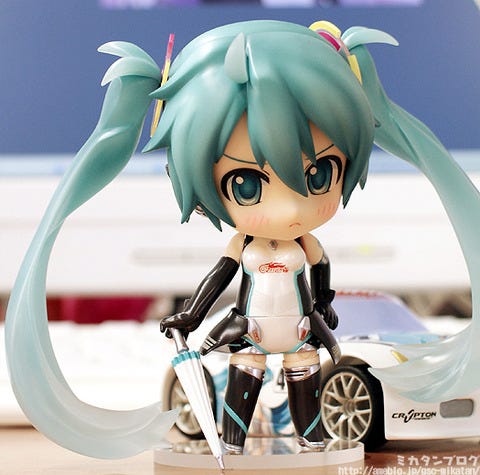 She also comes with an embarrassed face!

I didn’t know she had that kind of side to her…! 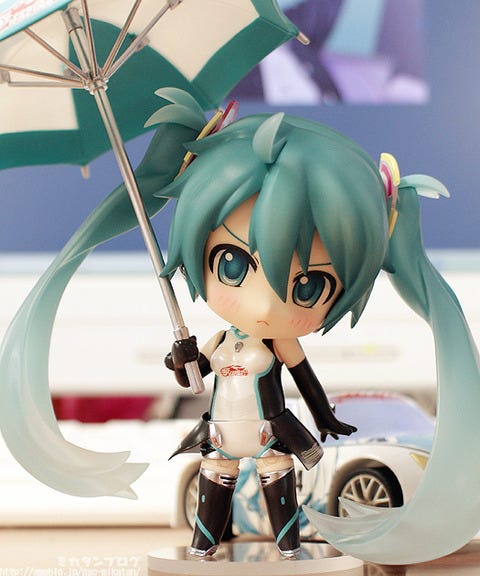 She carries on with her work no matter how embarrassed she is…!
(At least, that’s the setting I’ve created for her :P)

At the moment it’s still a master figure so I’m not sure how well the expressions will be able to swap with other Nendos… but I hope they can! 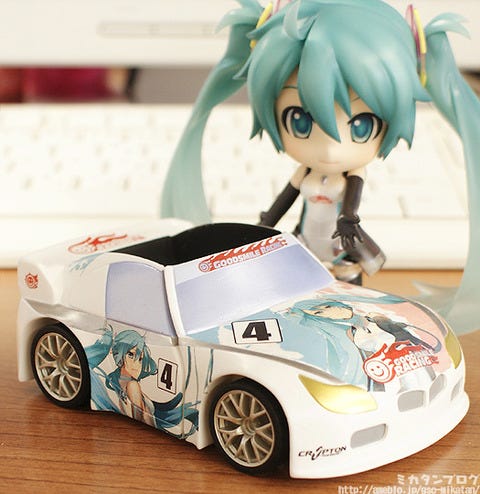 You can find a tutorial on sticking decals over that the blog written by Yama-chan, ‘GSR Report’… it’s only available in Japanese, though… 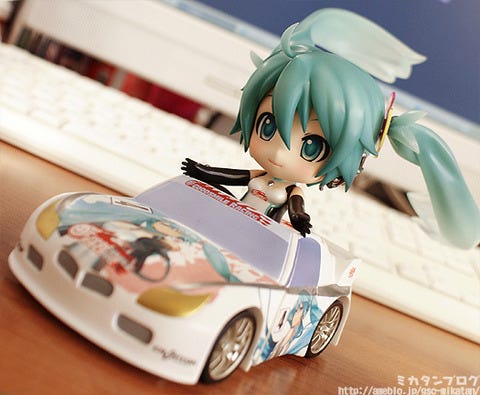 You can even put Racing Miku inside the car for a whole new effect! If you put her twin tails out behind her it even looks like the car is speeding ahead!
The car does actually have moving wheels, by the way!

Nendoroid Racing Miku 2011 ver. !
This Miku will only be available as part of the ‘GSR & Studie with TeamUKYO’ sponsor courses.

The courses she will be in are as follows:

You can order at NicoNico Chokuhan!

Orders are available until the 9th of May.