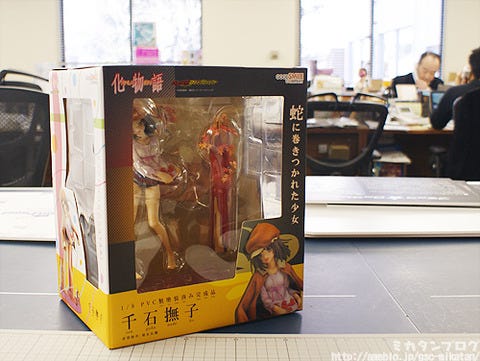 Which means I’ll start getting product samples again!!
We are of course trying to send all new products out to as many regions as possible, but under the circumstances there may be some areas that will have delayed delivery – if it’s not there on the release day just be patient…. it will reach you eventually!

The GSC Offices are currently out for the planned black-outs!

My desk is about half in the dark, but that’s not going to stop me from taking photos… the lighting might be a little different to normal, but the figure is super cute so I don’t think it’ll make too much of a difference… I’ll take some extra pictures instead!

That said, let’s get onto today’s product! 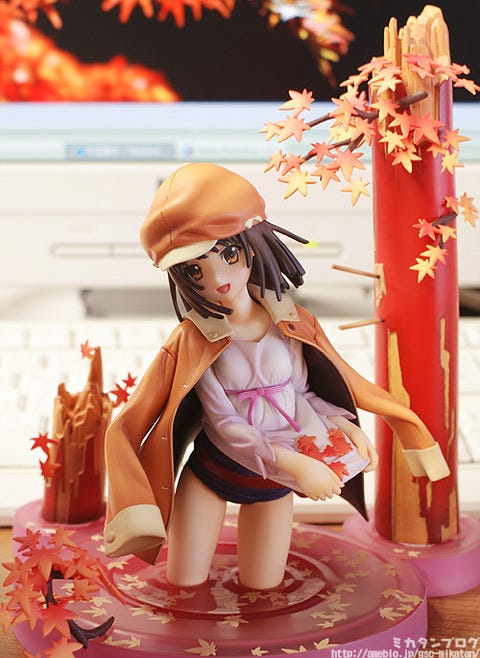 The 2nd figure in the Bakemonogatari series:

Nadeko is from the popular anime series ‘Bakemonogatari’! The pose of the figure is based on the jacket cover of the 4th volume Blu-Ray and DVD covers of the series. It shows Nadeko wading through some water with an adorable smile beaming across her face in a relaxed autumn atmosphere.

She is the second in a series of figures, following on from Hitagi Senjougahara, and just like her predecessor… she is filled with extra parts and a stunning base to boot!!  Σ(･∀･) 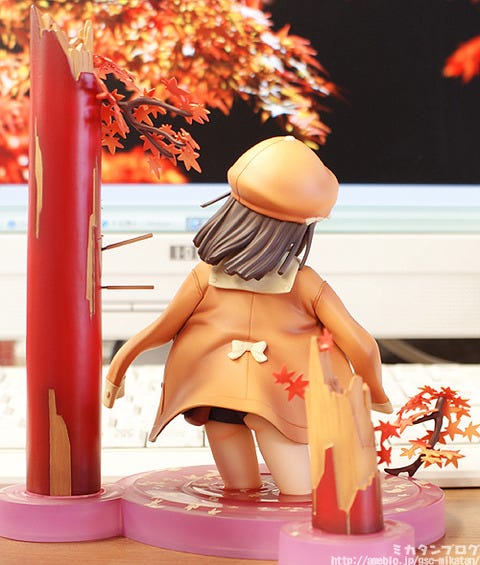 It doesn’t matter what angle you look at her from… she looks great from any angle! It’s wonderful to see more figures that build an entire scene like this one! 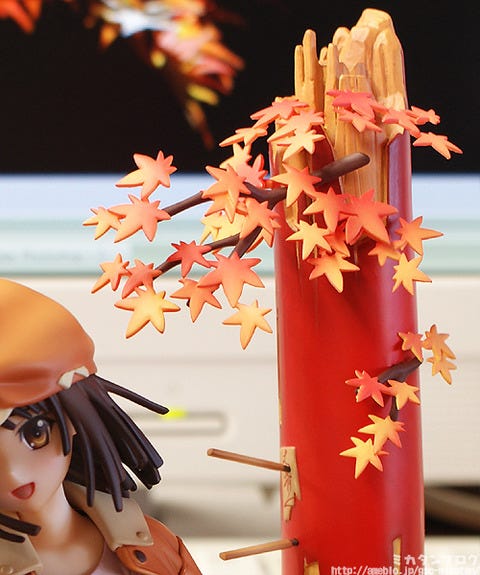 Just like Hitagi, the stand is just as amazing as the figure itself!

If you haven’t seen it before, take a look at this article to see just how the painting is done:
Paiting 1/8th Scale Hitagi Senjougahara’s Stationary! 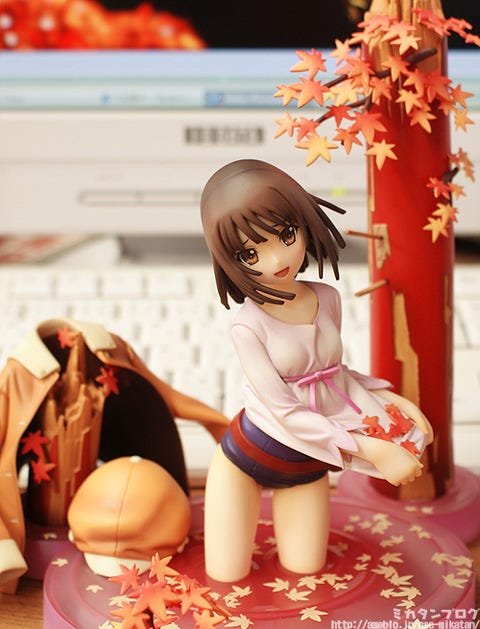 Her jacket and hat can both be removed!

Nadeko is easily embarrassed so she tries to hide behind her jacket and hat… which looks fine on her, but…

But she looks even cuter without them!! (;ﾟ∀ﾟ)=3

Just like Hitagi’s skirt, even the inside of Nadeko’s jacket has been completely painted!

The area where the the jacket connects to her however is kept the same color to make sure that the different color does not rub off onto the actual figure. 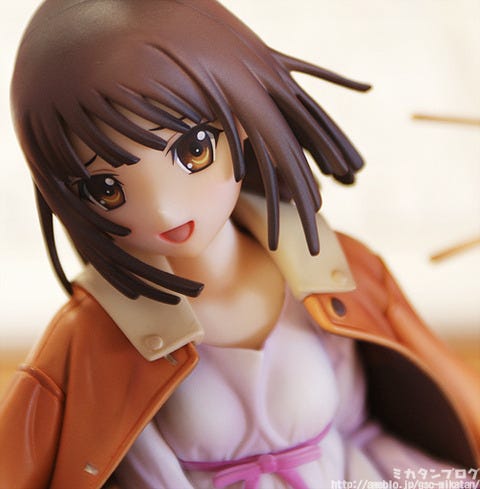 Aww, she is trying so hard to hide her embarrassment, but she just can’t hide those frowning eyebrows!! 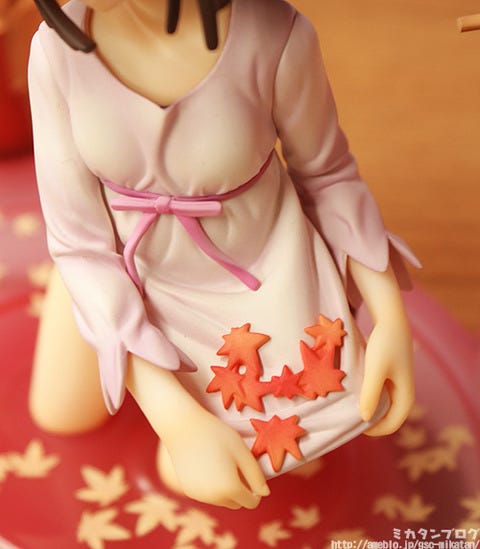 Autumn leaves on her shirt!

Plus look at the detail of the creases around her breasts! They are perfect! Obviously the leaves on her shirt have the same stunning paint work as the other leaves. 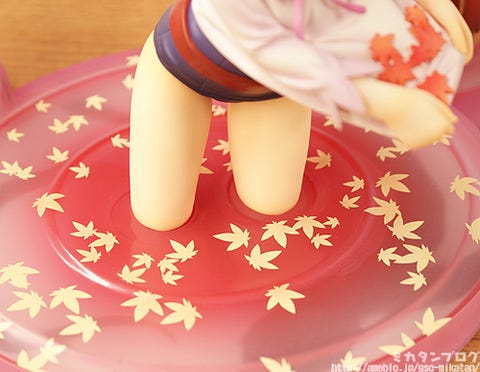 There is a snake inside the clear base!

It looks like he is just at the surface of the water, twirling around Nadeko’s legs….! I can’t believe the amount of thought that must have been put into this figure!

The base is made of clear plastic, but if you look close you’ll notice it also has a lovely gradient effect to it. There are also bright gold leaves floating all over the water, and stunning ripples moving out from Nadeko’s legs. It all comes together to create a really stunning scene! 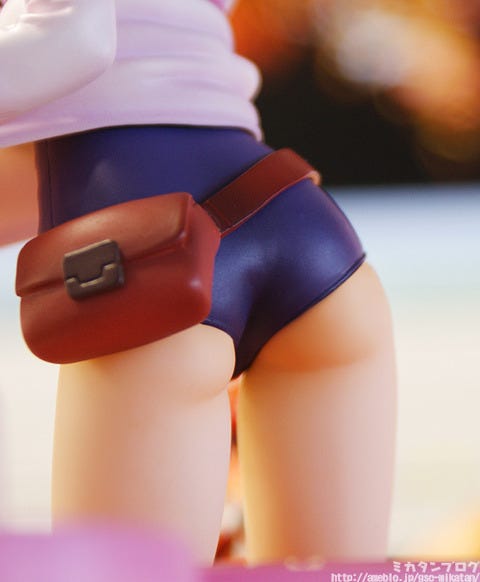 That’s all for today’s blog… but…

Nadeko also comes with a set of replaceable legs!
Tomorrow I’ll take a look at her with the alternate legs instead.

That’s all for today!
I hope to see you all again tomorrow!