Until the 3rd April, the GSC Cafe… 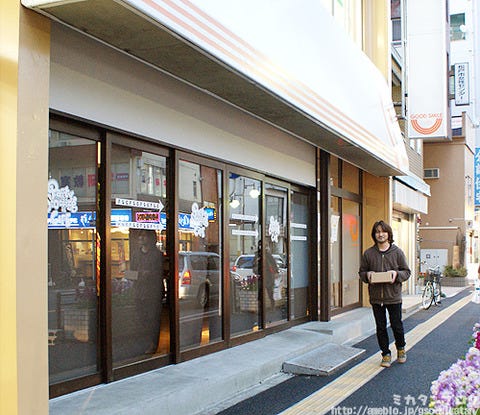 will be a Panty & Stocking Cafe!!

Originally it was only going to be until the 27th of February, but the date got extended because it was so popular!

It looks like one of the GSC Staff are wandering about outside the cafe with a box… could that box be… a master figure…?! Give it to me!! 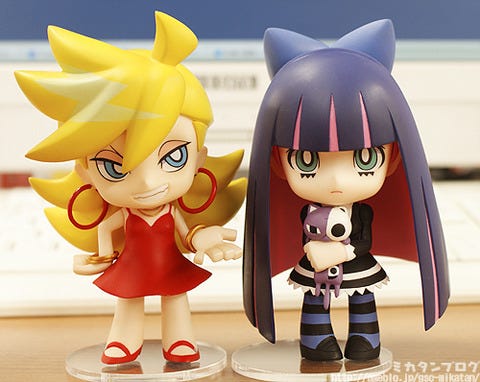 Ooh! There really were figures in the box! These two are likely to attract a couple of newcomers to Nendoroids, so let me give a quick introduction!

My name is Saitou and I work for Good Smile Company – we make a variety of figures like these girls! These two are ‘master figures’ which are basically the master designs created by the sculptor before they are mass produced for stores. I always steal the master figures and display them on this blog!

Today we’ll be playing with these two! 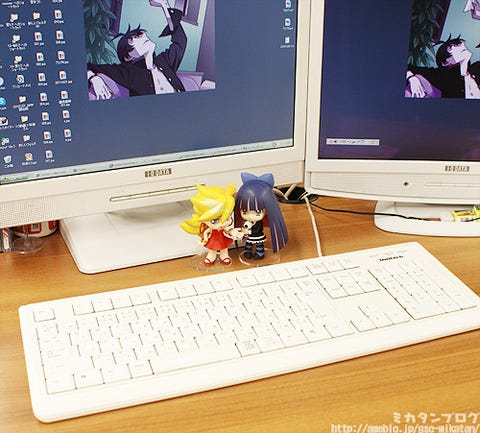 Well… to put it simply, they are cute posable character figures with big heads and small bodies!

The photo above shows how big they are!

A very convenient size to display on your desk! 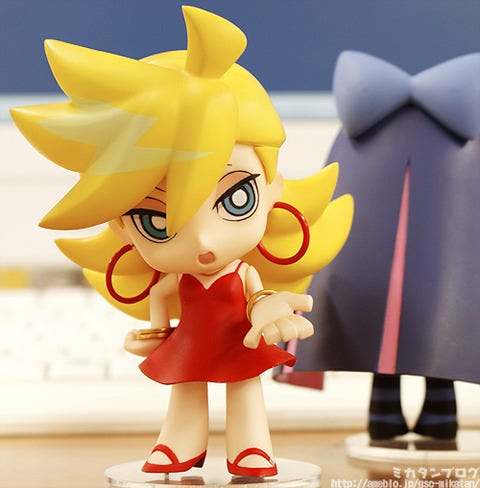 Right, today’s introduction was a little longer than normal, so let’s hurry up and look at the actual figures. Today we’re going to be focusing on…

Panty is the older of the two girls from GAINAX’s popular anime “Panty & Stocking with Garterbelt”! She is quite the playgirl and is rather bitchy as well. ^^; 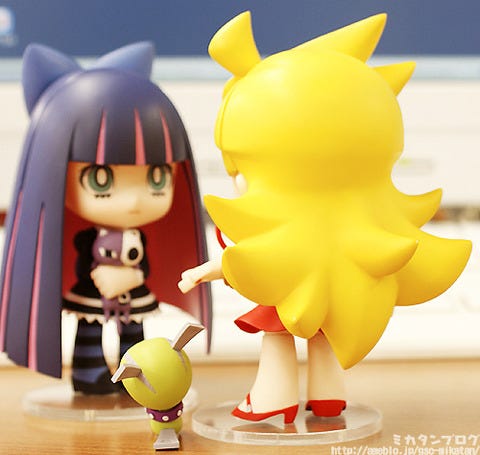 Panty’s long blond hair looks just like it did in the anime!

But who is that next to her!? 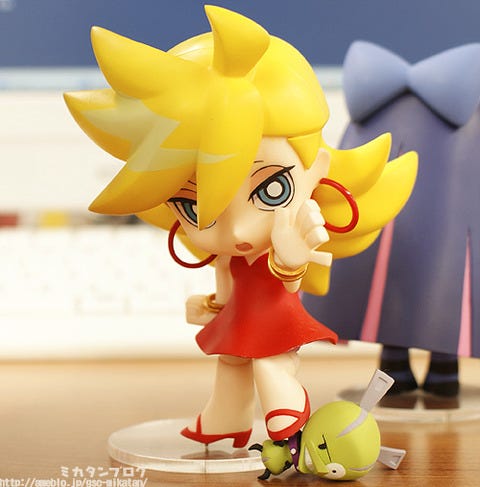 Her pet(?) Chuck is also included!

The actual figure of Chuck is only about 3cm high, but even so it is of an incredibly high standard of quality – he is made using 3D data so even the smallest details are included! 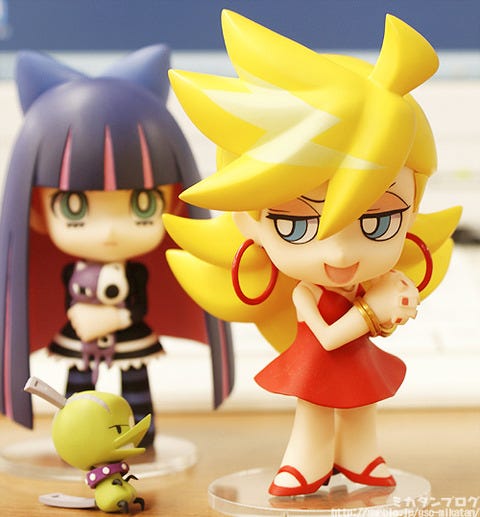 First up is the face she made whenever she saw a cute guy!

Definitely an expression suited to her playgirl personality. She also comes with an extra pair of hands with interlocking fingers, which really suits the expression! 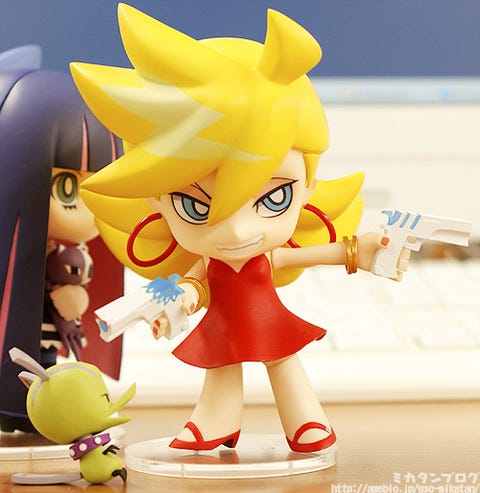 She also comes with an expression that is ready to destroy some ghosts!

If you prefer Panty when she’s fighting then this is the expression for you! Plus she comes with the two guns that she changes her panties into- “Backlace”!

She comes with replaceable parts for that too!

We’ve released so many Nendoroids… but this is definitely the first one to have replaceable parts for when she takes off her panties… ^^; 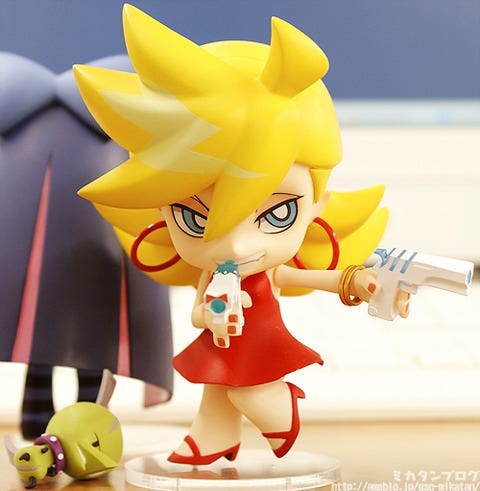 The last option part is a bent left leg!

You can use these parts to recreate the scene where she stomps on Chuck, or just for a cool battle pose like this one! Obviously there are a load more poses you can make – you just have to find your favorite pose for Panty! 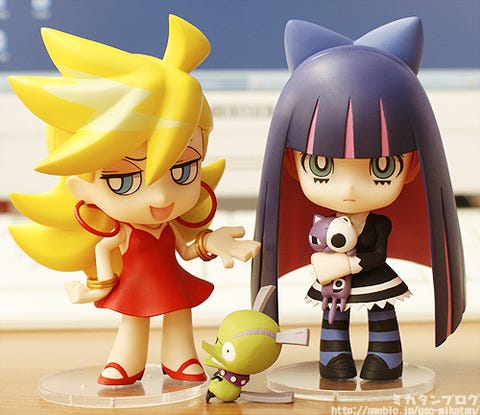 But that’s all the time I have for today…

Some options to get hold of them:

These girls are scheduled to release in June!

Preorders will start from the 24th February. If you preorder from our partner shops you’ll be guaranteed to get the figure! There are lots of places that you can preorder the figure online as well – some that will even ship overseas!

If you just wait until July then you can head to our partner shops and simply pick up the figure from them. But you might not be able to get one if you don’t preorder, so personally I think preordering is a better idea if you want the figure.

Plus there will be one extra method to preorder these girls!

But I’m only going to explain that one if you come back tomorrow! :P
So I hope to see you all again then!  (・∀・)ノ