It’s been awhile since a figure review! 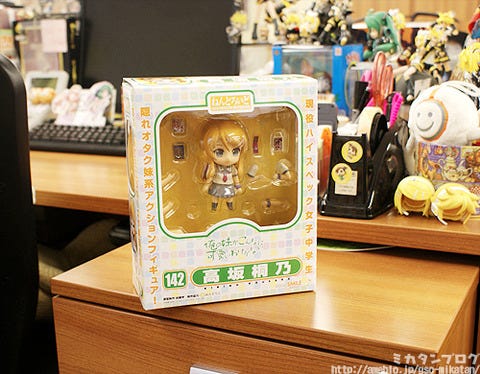 I spy with my little eye… a figure sample on Koyamada-chan’s desk!

I always have to tell myself that otherwise I feel bad…

But anyway, today we’ll be taking a look at: 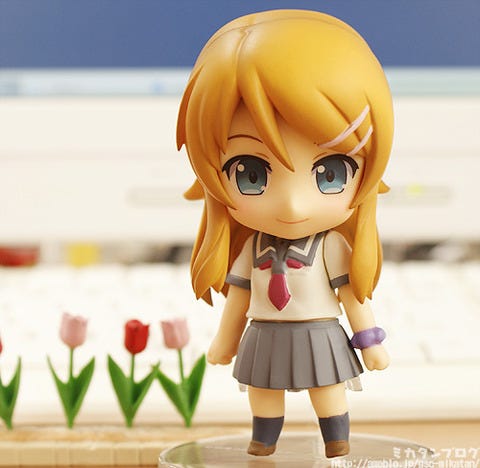 She’s shipping out from GSC on the 25th February!

Kirino is the cute little sister from the popular novel that was adapted into an anime series “Ore no Imouto ga Konnani Kawaii Wake ga Nai” or “There’s no way My Little Sister can be This Cute!”. 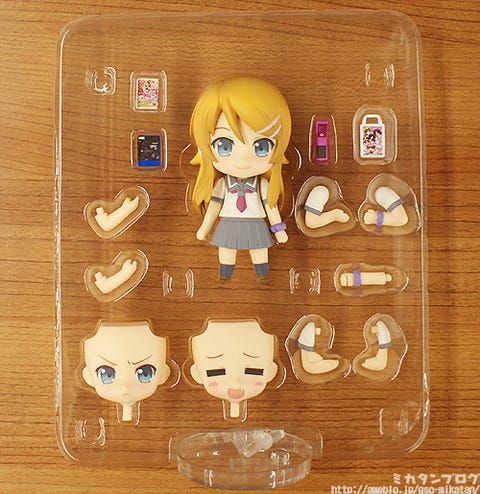 It looks a lot like the Touhou Nendoroid packs – there are a ton of extra arm parts for a variety of poses… along with a couple of extra expressions as well! 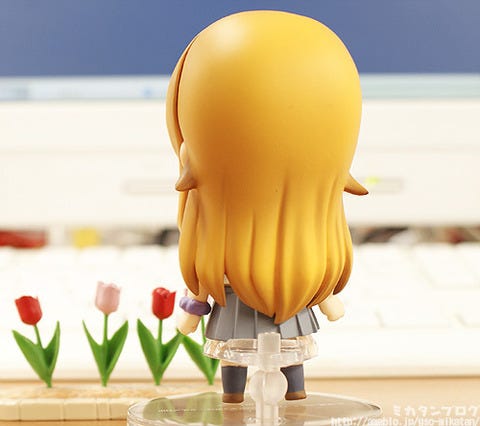 Her little tufts of hair sticking out my her ears are adorable! It makes her look so cute! The stand is the typical ‘sitting on’ type of stand, which lets her stand up nice and securely. 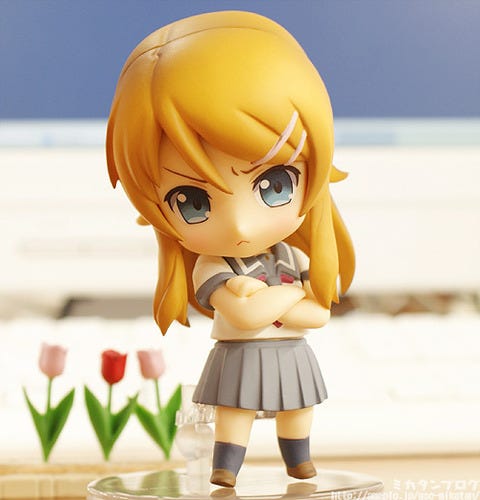 The famous pose from the novel cover!

This is definitely the most notable pose for Kiririn!

She even has the angry expression from the cover!

If you combine this expression with the crossed arms and then angle the legs slightly you can recreate the pose from the cover almost perfectly! 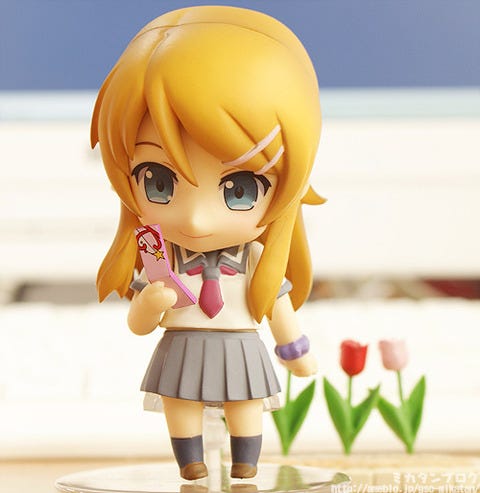 You won’t find Kirino without her cellphone!

Here she is using her smiling face and a bent right arm!

The phone looks exactly like the one from the anime! You simply insert it between her fingers to let her hold it! 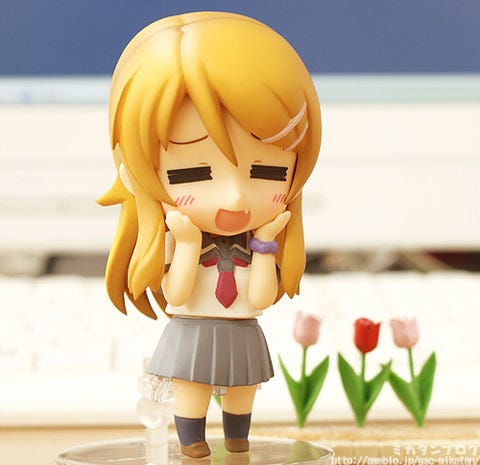 She can even go into moe mode!

A moe expression as well as hands to touch her cheeks!

This expression has definitely been the most popular from everyone ever since she was announced! When I see her like this I can’t help but picture a huge pink heart behind her …^^; 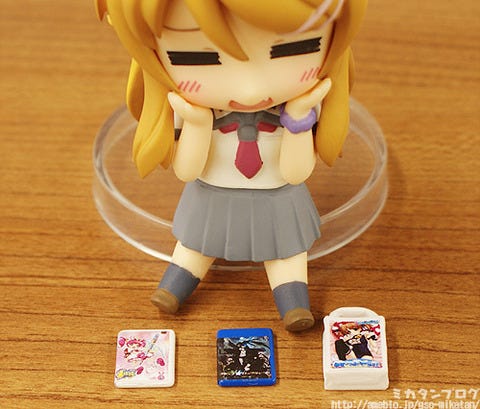 She comes with both a DVD case from “Hoshikuzu Witch Meruru” as well as paper-bag from a doujinshi event!

She even comes with a Black Rock Shooter Blu-ray case! ^^;

These parts come as stickers at first – you need to stick them on yourself! 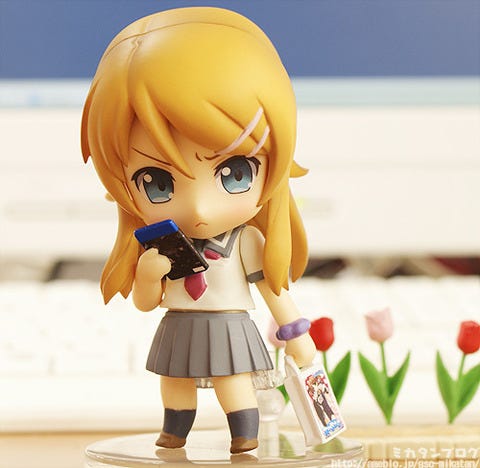 She can even hold them!  ヾ(ﾟдﾟ)ﾉ゛

She comes with hands to hold both the DVD case and the bag! Coupled with that expression it’s almost like she’s saying “You can’t have them! They’re mine!” :P

Is what I was told… I guess a real Kiririn sister is impossible…? :( 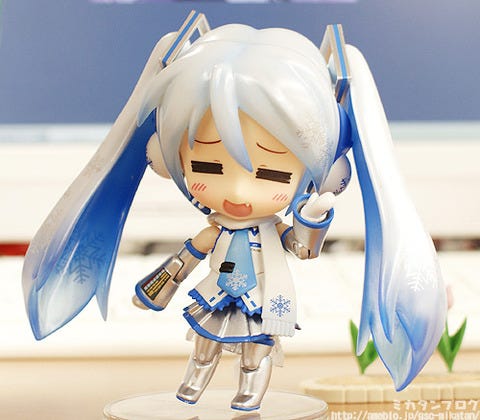 Snow Miku 2011 isn’t compatible with that many other Nendo expressions, but this one managed to fit! I’m fairly certain that this is one face that will suit a ton of Nendoroids, so be sure to try it out on your favorites! 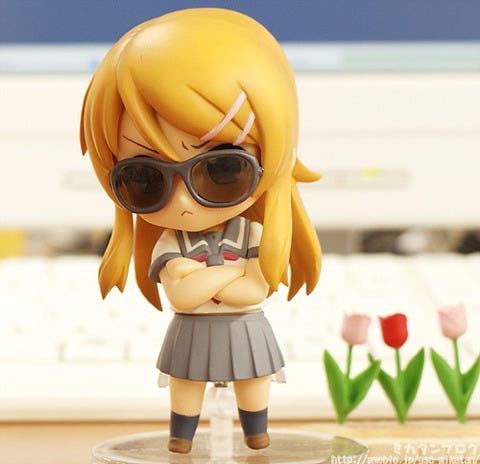 This version of Kiririn is Station Yamada’s #1 recommendation. That cheeky look is only multiplied by those glasses… it’s strangely suiting! 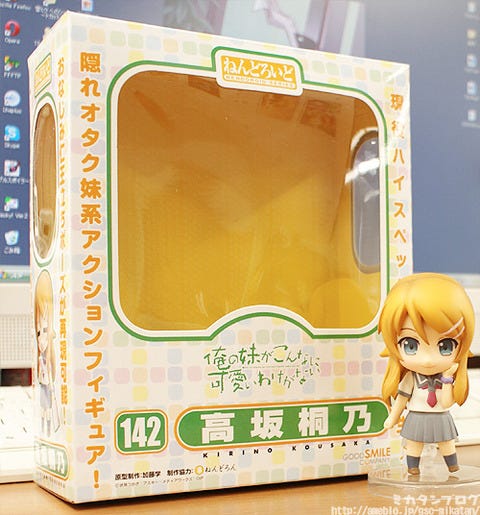 She should be in stores from the 26th!

For ordering details or questions please check our partner shops.