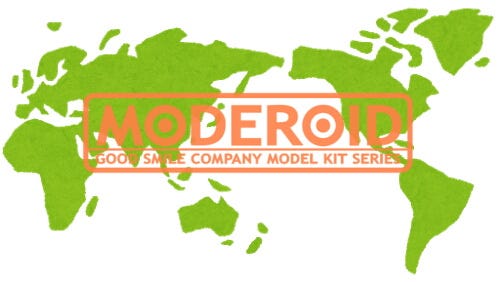 From February 18th to March 11th, we conducted the second MODEROID series survey to ask you, the fans, about what kind of robots you want to see join the MODEROID series! Not only is the MODEROID series popular in Japan, but there are many fans internationally!

In fact, more than half of all MODEROID shipments have gone to places outside of Japan!

Without further ado, let’s see what topped the list for the MODEROID survey for voters outside of Japan! ※Items are sorted in alphabetical order

※Japanese Survey results are not included in this list.

Here is a better look at the names of each robot if it’s hard to see above! 6 robots in the top 10 are from the Brave series!!

Within Japan, several companies have their own lines of plastic models from the Brave series, so perhaps a lot of Japanese voters voted for different robots on purpose, but that wasn’t the case in these results!

If anything, it shows that no matter where you are in the world, the Brave series is certainly popular!

I can’t say for sure that we’ll be able to throw our hat in the ring when it comes to Brave series plastic models, but I’ll do what I can to support the fans!

One of the members of the production team worked with us on MODEROID Mazinkaiser, so you can be sure it will be high-quality! ※Items are sorted in alphabetical order Evangelion and Getter Robo were popular requests in English-speaking countries!

Daikengo had several votes from Italy!!

Much like Japan, there were a lot of votes for Tetsujin28 and its variations!

There are a lot of combining mecha in this list, but for me the most surprising was…

I double-checked and triple-checked the numbers! It really is that popular!

There were a lot of people voting for it along with Brave series mechas, actually!

(By the way, El Dora Soul is counted separately, but if you add in those votes, it goes up even more.)

(I checked the Japanese results and El Dora V is sitting right at 100.)

With the help of all of our amigos across the world, maybe we’ll be able to give some lesser known robots a chance at a plastic model kit!?

Thank you to everyone across the world for your votes!

Stay tuned for whatever is coming next in the MODEROID series!

Preorders for many products at the GOODSMILE ONLINE SHOP are closing soon! Here are the products closing the 09th April 2020 (Thu) at 12:00JST!

Preorders for many products at the GOODSMILE ONLINE SHOP US are closing soon! Here are the products closing the 09th April 2020 (Thu) at 12:00JST!