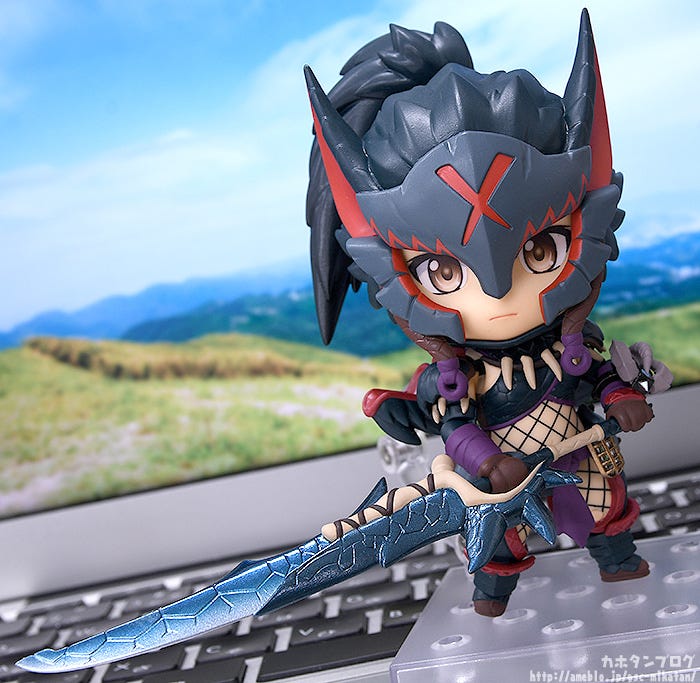 From the PlayStation®4/PC (Steam) game “MONSTER HUNTER WORLD: ICEBORNE” comes a fully articulated Nendoroid of a female hunter in Nargacuga Alpha Armor. This special DX version includes all the parts that are included with the standard version together with bonus parts for even more display options!

She comes with two face plates including a reticent standard expression and a crazed expression. The Hidden Saber is included along with two carving knives and a throwing knives effect part.

Additionally, the DX version comes with an interchangeable head part for displaying the hunter with a ponytail haircut, the Hidden Tomahawk I Dual Blades, a critical hit effect part, a Demondrug consumable and an original eye glint effect part made for the Nendoroid, allowing you to enjoy the world of “MONSTER HUNTER WORLD: ICEBORNE” even more!

One who hunts under the cover of twilight, moving like the wind.

Even in tiny 10cm size, the brave and sexy charm of Nargacuga armor shines through! Everything from the Hidden Saber to the armor set’s elaborate helmet has been faithfully preserved in Nendoroid form!

The two included carving knives can be removed from their hip sheaths, allowing you to create this pose…! Combine the knives with the included throwing knife effect part! ▲You can almost hear her shout!

The DX Nendoroid includes an interchangeable head part allowing you to display her with a ponytail hairstyle! ▲The head part gives you a better look at the face beneath the armor!

As you may have noticed, the Hidden Tomahawk I Dual Blades are also included! The sharp metallic blade and blue dragon scales have been faithfully captured and recreated! ((｀・∀・´))

You can also display the Hunter drinking a Demondrug consumable… …and then unleashing her demonic strength! The eye glint effect part is based on the Nargacuga’s red eyes in its enraged state! It attaches to the front hair/helmet parts!( ・ㅂ・)و ̑̑ Enjoy using all of the different included parts to change up your display time and time again!

Here’s another look at what all is included! Available for preorder from the 18th of February! ▲Currently in the works!▲

Preorders for many products at the GOODSMILE ONLINE SHOP are closing soon! Here are the products closing the 20th February 2020 (Thu) at 12:00JST!

Preorders for many products at the GOODSMILE ONLINE SHOP US are closing soon! Here are the products closing the 20th February 2020 (Thu) at 12:00JST!