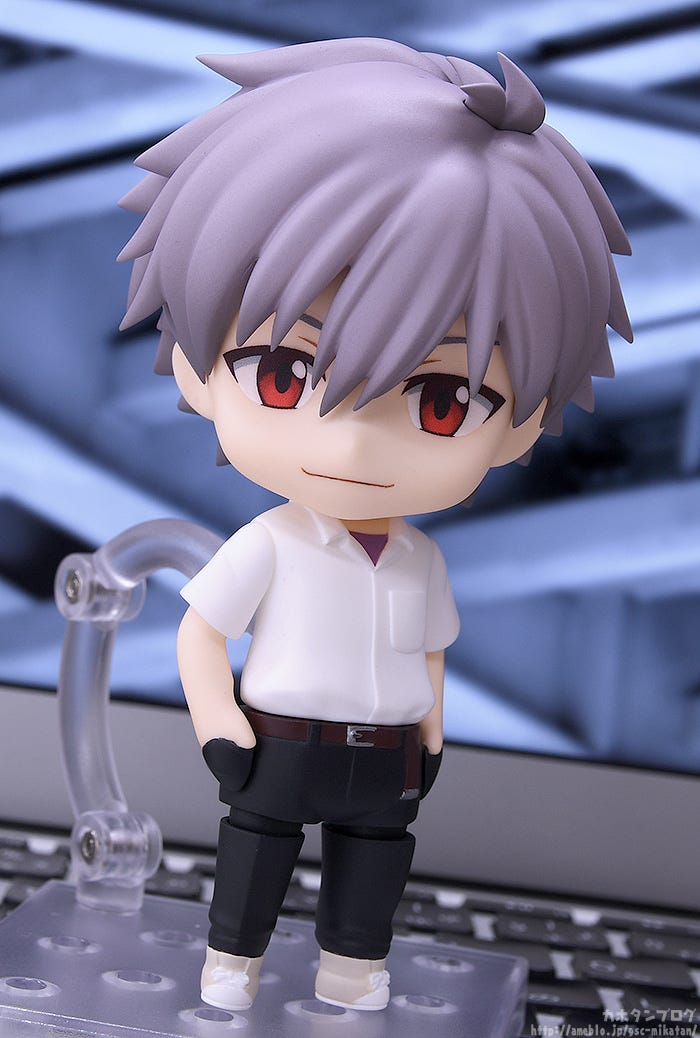 From the popular animated film series “Rebuild of Evangelion” comes a Nendoroid of the SEELE Child, Kaworu Nagisa. He comes with three face plates including a standard expression, a smiling expression with closed eyes and a sidelong glancing expression.

He comes with an A.T. Field effect part, a base made to look like stone rubble, special lower half parts to pose him sitting and a portable music player part made for displaying him with Nendoroid Shinji Ikari. Be sure to add him to your collection!

From the “Rebuild of Evangelion” series of films comes a Nendoroid of the mysterious boy Kaworu Nagisa! An A.T. Field effect part is included as an optional part! ▲A special stand piece is also included, allowing you to easily display it and recreate scenes from the series!

▲An outstretched hand part is included too!

As for his third expression, it’s a sidelong glancing expression! As you can see, a base made to look like stone rubble and special lower half parts to pose him sitting are also included!

(That sitting pose… from that illustration!?)

A portable music player that you can pose with Nendoroid Shinji Ikari is included as well! *This part is made to display both of them listening to the music player, so it’s different from the part included with Nendoroid Shinji Ikari! Be sure to display with Nendoroid Shinji Ikari! Preorders for many products at the GOODSMILE ONLINE SHOP are closing soon! Here are the products closing the 16th January 2020 (Thu) at 12:00JST!

Preorders for many products at the GOODSMILE ONLINE SHOP US are closing soon! Here are the products closing the 16th January 2020 (Thu) at 12:00JST!