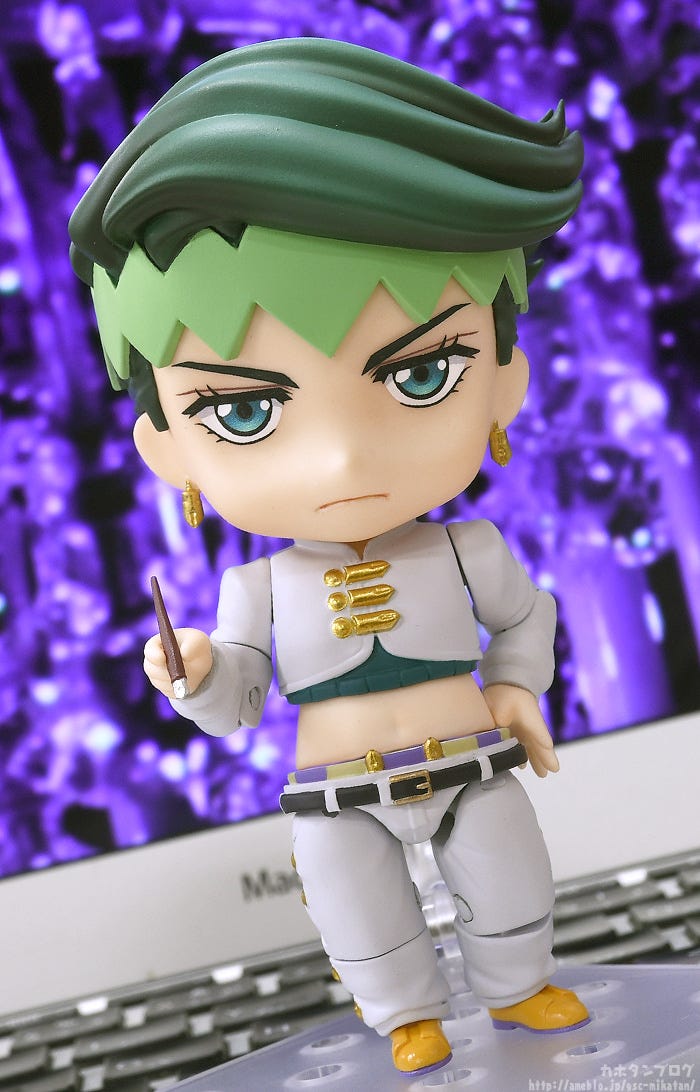 From the anime series “JoJo’s Bizarre Adventure: Diamond is Unbreakable” comes a Nendoroid of Rohan Kishibe, the manga artist dedicated to seeking out inspiration from reality by any means necessary. The figure is fully articulated so you can display him in a wide variety of poses. He comes with three face plates including his intellectual standard expression, his intimidating combat expression and his “I refuse.” expression, allowing you to recreate a certain famous scene from the series.

For optional parts, he comes with a pen, a manuscript, a clear plate featuring his Stand, Heaven’s Door, as well as his sketchbook. Various hand parts are included allowing you to recreate all kinds of poses. Enjoy combining all of his different included parts to recreate your favorite scenes from the series. Be sure to add him to your collection!

The popular manga artist living in Morioh, Rohan Kishibe, has been transformed into an adorable Nendoroid!

His unique hairstyle and characteristic crop top outfit have been carefully recreated! ☆ His waist, knee and elbows are all fully articulated, allowing you to recreate your favorite poses from the series!

“The hardest thing to do… is to surpass yourself!” ▲A “Paper” hand part is included allowing you to recreate the scene with Rock-Paper-Scissors Kid!

In addition to his standard expression…

“Do you think that I, Rohan Kishibe, draw manga for the sake of money and attention?!” …he comes with his intimidating combat expression! His furrowed brow and wide-open mouth really conveys his emotions!

Of course, since this is his combat expression… His pen, manuscript and a clear plate featuring his Stand, Heaven’s Door, are all included! Have fun recreating scenes from the series! ▲The Heaven’s Door plate comes with a special support arm and base, allowing you to display it independently! ▲The panels of his manuscript have been recreated in detail!

As for his third expression, you KNOW it has to be… Yes!! From that famous scene, it’s his “I refuse.” expression! Even in Nendoroid style, the strong, impactful appearance of this expression has been preserved. (;・`д・́) Additionally, a sketchbook that can be slung from his shoulder is included as well! Use it to pose him as though going out in the world to seek inspiration for his manga! ((｀・∀・´)) Available for preorder from the 12th of December!

Additionally, preorders from the GOODSMILE ONLINE SHOP or the Medicos Online Shop will include a Camera + Hand Part as a purchase bonus! Preorders for many products at the GOODSMILE ONLINE SHOP are closing soon! Here are the products closing the 12th December 2019 (Thu) at 12:00JST!

Preorders for many products at the GOODSMILE ONLINE SHOP US are closing soon! Here are the products closing the 12th December 2019 (Thu) at 12:00JST!