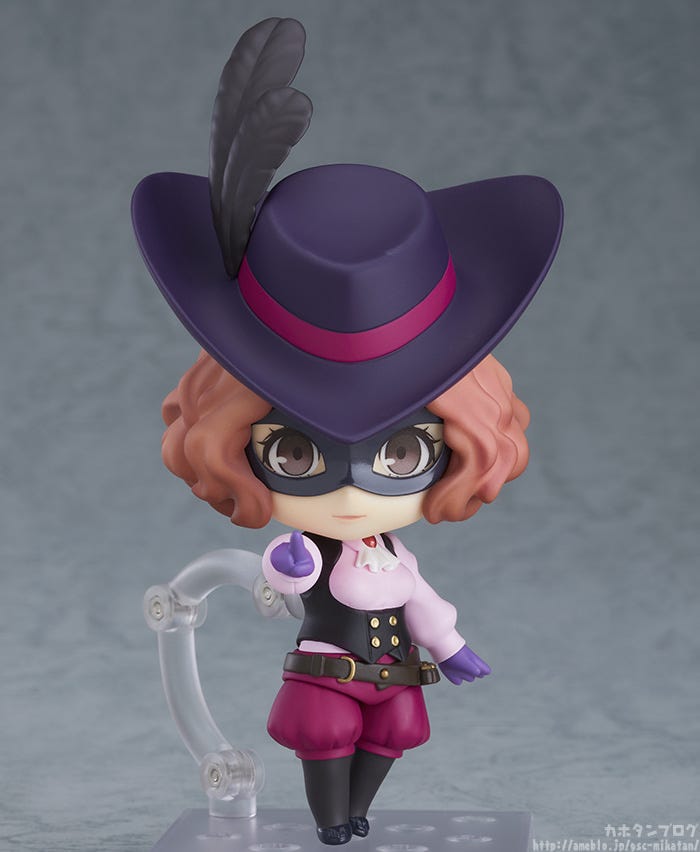 From the popular anime series “PERSONA5 the Animation comes a Nendoroid of Haru Okumura, also known as Noir, in her phantom thief outfit! She comes with several optional parts including her axe, grenade launcher and a miniature sized mask that she can be posed holding. Additionally, a cut-in sheet is included to recreate Persona summoning sequences and All-Out Attack finishes!

She comes with three face plates including a standard expression, an angry expression and a sidelong glancing expression. Be sure to add her to your collection, along with the other Persona series Nendoroids!

The final member of the Phantom Thieves, Haru Okumura, is now an adorable Nendoroid!

Her medieval-esque hat with feather, phantom thief outfit and curly hair have been recreated in outstanding detail!

As with the other Phantom Thief Nendoroids, her mask and hat are both removable, allowing for multiple different display options! ▲A handheld mask is also included, perfect for recreating situations with her mask off! ☆

Her axe and grenade launcher are both included as optional parts! ( ・ㅂ・)و ̑̑ Combine with her angry expression shown above to recreate combat scenes! ◎ In addition to her standard expression and angry expression face plates, she also comes with a sidelong glancing expression! Despite her smiling face, this expression conveys more of a sense of determination rather than gentleness! Have fun using it to recreate your favorite scenes from the series! ★ In order to recreate her All-Out Attack finish appearance, a chair, sitting parts, tea cup and saucer are all included! ヾ(o´∀｀o)ﾉ

Additionally, the following products are currently available for preorder as rereleases! Preorders for many products at the GOODSMILE ONLINE SHOP are closing soon! Here are the products closing 19th September 2019 (Thu) at 12:00JST!