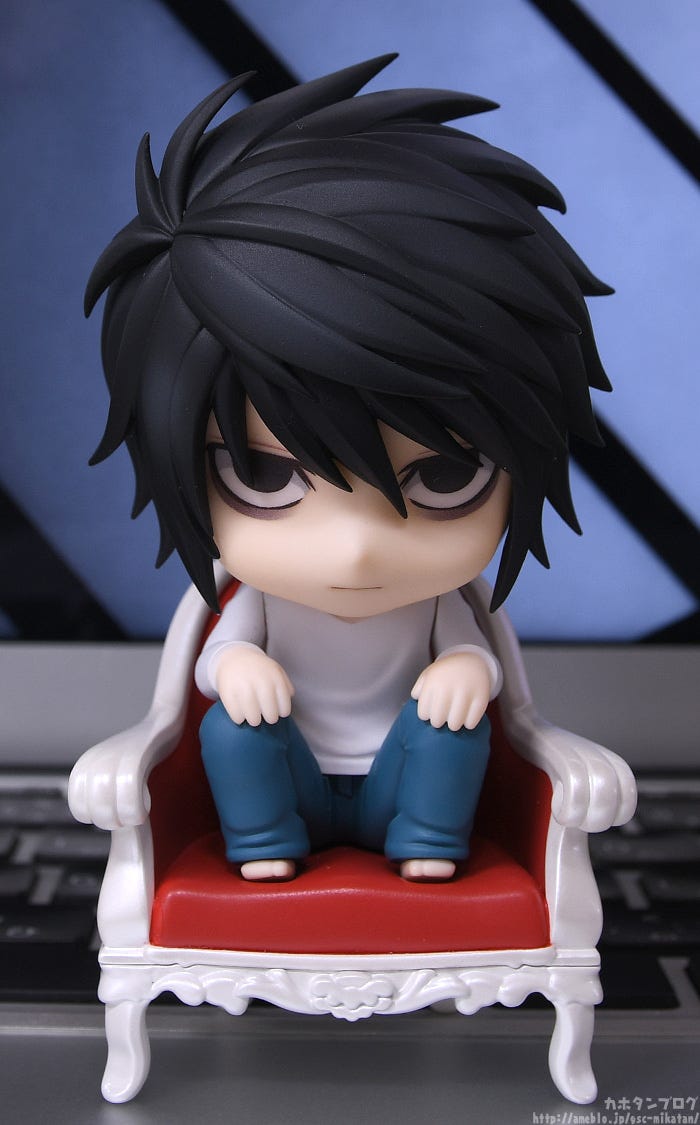 When it comes to sweets, I prefer chocolate over hard candies! From the popular manga series “DEATH NOTE” comes a Nendoroid of L in an all-new updated version! He comes with three face plates including his standard expression, his thinking expression often seen while he is biting his nails and his smiling expression.

Optional parts include his chair, one of his favorite sweets as well as the handcuffs from the series. Have fun displaying with Nendoroid Light Yagami 2.0 (sold separately). Be sure to add him to your collection!

“Justice will prevail no matter what.”

From the manga series with longstanding popularity “DEATH NOTE” comes an all-new updated Nendoroid of the genius rival of Light Yagami, L!

His long black hair, jeans and tired-looking sanpaku eyes have been carefully recreated.

L’s unique charm has been perfectly captured. The Nendoroid features his trademark sitting pose with his knees to his chest. ▲Yep! His red and white chair is included. The hole in the back is for the support arm!

As the name 2.0 suggests, this is the second version of Nendoroid L! The original released over ten years ago in September of 2007…! Nendoroids are much different nowadays, but the old one definitely have their own special charm. ♪ ▲Older Nendoroids are very round! ( ・∀・)

He comes with three face plates including his standard expression seen earlier.

A thinking expression is also included! You can use this expression with included special hand parts to show him chewing his fingernails, another one of his habits! ▲Without the chair, you can display him squatting using the support arm! You can certainly feel a suspicious air behind this smiling face… ((( ;ﾟДﾟ)))

Let’s take a look at the optional parts he comes with! By the way, it’s easier to see from the side, but his upper-body has been accurately sculpted to portray his hunchback! ( ･ㅂ･)و ̑̑ ▲His knees are also slightly bent as well! He also comes with strawberry shortcake and a fork! Something sweet to help him think! It’s a bit hard to see, but if you look closely you can also see he’s holding the fork between his thumb and pointer finger! ◎

Finally I want to take a look at one more optional part! (「・ω・)「 Handcuff parts that made quite an impact in the series are also included!

The chain part is made like an actual chain, making it easy to pose them close or far away! Pose with Nendoroid Light Yagami 2.0 to recreate your favorite scenes from the series and create your own situations! ((｀・∀・´)) Available for preorder from the 5th of September! Preorders for many products at the GOODSMILE ONLINE SHOP are closing soon! Here are the products closing 5th September 2019 (Thu) at 12:00JST!