Nendoroid Hina Amano (Weathering with You) 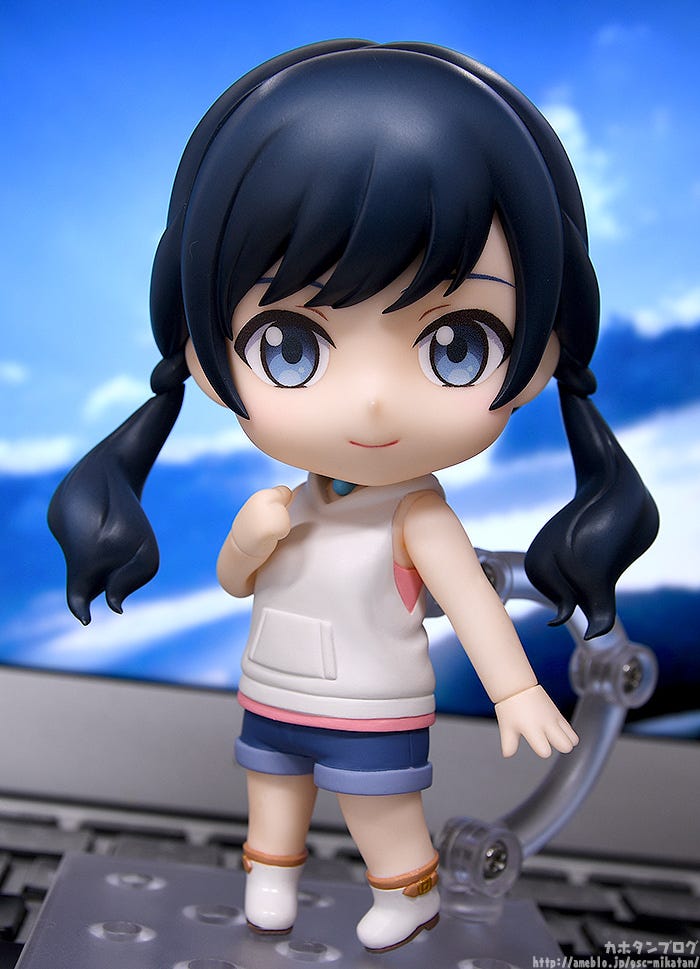 From Makoto Shinkai’s popular animated film “Weathering with You” comes a Nendoroid of the heroine Hina Amano. She comes with two face plates including her lovable standard expression as well as a praying expression with her eyes closed.

For optional parts she comes with the Teru Teru Bozu decorated umbrella as seen in the film! The umbrella can also be displayed as a standard umbrella. Additionally, a special base for recreating the film’s key visual is included. Display with Nendoroid Hodaka Morishima (sold separately) scheduled to be available for preorder soon and enjoy recreating the scene from the film’s key visual!

The girl who can clear the skies with her prayers.

From Makoto Shinkai’s new hit film “Weathering with You” comes a Nendoroid of Hina Amano!

Her unique hairstyle, sleeveless hoodie and glossy rain boots have all been carefully recreated! ♪ You can even see details like the zig-zag pattern in her hair, and her top worn under the hoodie! Her shorts have been perfectly recreated as well.

A yellow umbrella is included as an optional part! (  ˊᵕˋ )つ☂ ▲Of course, a hand for holding the umbrella is also included! ◎ Additionally, by attaching the optional parts in the picture above, you can recreate her Teru Teru Bozu umbrella from the film!

The Teru Teru Bozu attach straight to the umbrella! ((｀・∀・´))

Display with or without them; the choice is yours! ▲Both right and left hand parts for holding the umbrella are included!●

A stand base based on the film’s key visual is also included! ☆彡 The concrete appearance of that rooftop has been recreated! ( ･ㅂ･)و ̑̑

The stand base goes directly on top of the typical Nendoroid square base like this. ↓↓ Have fun displaying her with this special base to recreate the atmosphere of the film! ★ ▲Be sure to display with Nendoroid Hodaka Morishima (sold separately) coming soon!

Finally, I want to take a look at one more part! It’s her closed-eyes praying expression that especially made an impact in the trailer! Available for preorder from the 27th of August until the 26th of September! POP UP PARADE Hodaka and Hina