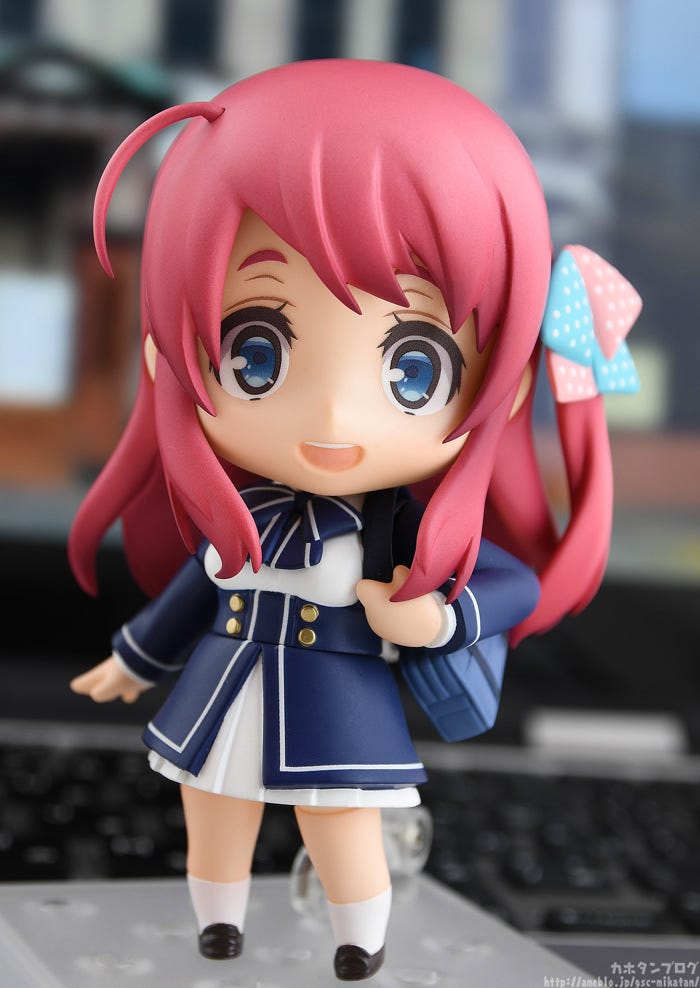 Zombie Land Saga has been confirmed for a second season…!! From the anime series “Zombie Land Saga” comes a Nendoroid of Zombie Number 1 Sakura Minamoto in her school uniform! She comes with three face plates including her standard expression, her zombie expression and her panicking “What do I do?” expression.

For optional parts, she comes with her school bag and envelope from her previous life as well as a paper craft truck. Zombie hand and leg parts are included to recreate her zombie appearance. Be sure to add her to your collection!

“Because it’s our SAGA!”

Franchouchou’s Zombie #1 and speaker of Karatsu dialect, Sakura Minamoto, is now a Nendoroid!

Her long hair and adorable polka-dot ribbons have been carefully recreated! ▲Her one lock of hair sticking out the front is adorable!

The strand of hair tied with ribbons is jointed, allowing you to easily move it to match her pose!

▲Her school bag is included too! Look at that cute yellow ribbon!

Her brown envelope is also included! The truck that made an impact (by more than one meaning of the word) in the first episode is included as a paper craft!

The broken glass of the windshield has been recreated!

Here’s a look from all sides.

Everything has been faithfully captured in detail!

As you can see, not only the truck is included, but the boxes that were in the back of the truck are included too! But really… look both ways before crossing the street, everyone.

But the parts don’t stop there! Of course, her blue skin is worth mentioning too! ▲If you pose her with her arms up, it looks like she hasn’t regained her senses yet!
Finally, for her third face plate…
“What do I do!? What do I do!?” Shocked at becoming a zombie, it’s her “What do I do!?” expression!

That trembling mouth is adorable!

Even as a zombie she’s cute! ▲Left: Zombie hand / Right: “What do I do!?” hand
The subtle movement of her fingers has been carefully captured!

Available for preorder from the 31st of July to the 29th of August!

Preorders for many products at the GOODSMILE ONLINE SHOP are closing soon! Here are the products closing 1st August 2019 (Thu) at 12:00JST!