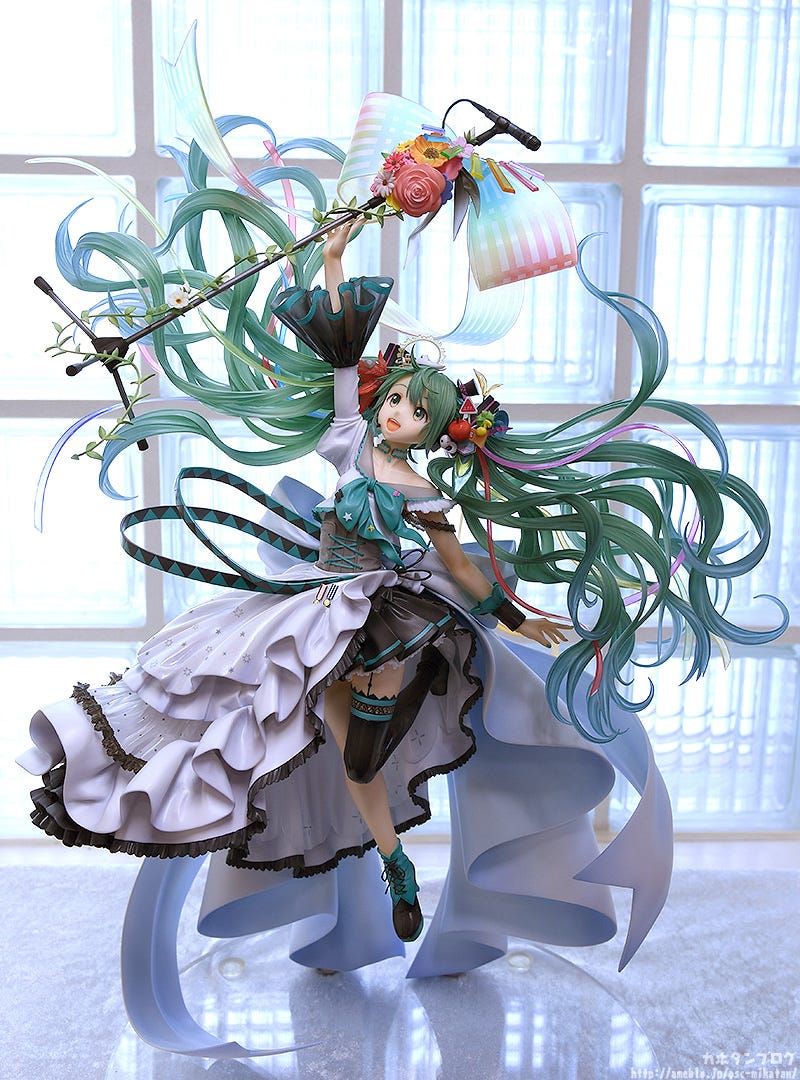 A beautiful scale figure of Hatsune Miku based on the winning illustration of the Hatsune Miku 10th Anniversary Illustration Contest! The winning entry was Pomu’s “Reaching Ever Higher”, which has now been transformed into a gorgeous figure at the hands of the esteemed sculptor, Takayuki Kawahara!

Each and every detail of the figure has been meticulously to faithfully capture the theme of the original illustration – the past and future of Hatsune Miku. Her unique dress, the accessories that adorn her hair and the microphone stand at her fingertips all incorporate motifs from the numerous songs Hatsune Miku has sung in the past.

Her hair has been sculpted with translucent sections which not only create an ethereal appearance but also bring out the perfect hue. The charming expression on her face has also been perfected in figure form, filled with hope for the future to match the title of the illustration – “Reaching Ever Higher”. This work of art challenges the limitations of what is possible for the world of figures, and can truly be called a masterpiece among Hatsune Miku figures! Be sure to add her to your collection.

From the past to the future, reaching ever higher.

From the Hatsune Miku 10th Anniversary Illustration Contest comes a scale figure of the winning illustration, “Reaching Ever Higher” by Pomu!

Her complex-yet-delicate hairstyle, glistening expression, decorations based on various different songs and breathtaking draped and frilled dress have all been meticulously sculpted piece-by-piece.

The charm of Pomu’s illustration has been brought to life in beautiful detail. Let’s take a look at her from every angle, shall we?

First I want to draw your attention to the detailed sculpting of the frills of her dress. ( *ˊᵕˋ ) ⁾⁾ Not just at the hemline, but look at how every frill beneath her skirt has been carefully sculpted for maximum accuracy!

The wave-like pattern of frilled materials has been perfectly captured. ◎

Every layer of frills has been painted to accurately portray the texture of each layer as well. ( ･ㅂ･)و ̑̑

A pearl coat and translucent parts have been utilized for the draping part of the dress’ skirt, giving it a beautiful, glistening appearance. The black lace at the hemline features a detailed pattern that really looks like the real thing!

Here is another part of the figure where you can see how the use of translucent parts of perfect thickness makes for a gorgeous lace appearance! You can see at her arm how the translucent parts used for her lace ribbon catch the light! ヾ(oゝ∀･)ﾉ

Be sure to take a look when you take her home!

Her hair has also been sculpted with sections utilizing translucent parts, giving it a magnificent ethereal appearance. ★ You may have noticed, but the figure attaches to the stand from the large ribbon flowing down from her back.

(We’re working hard to implement this feature in the final product!)

It really looks like she’s floating in the air! Speaking of floating, take a closer look at the microphone stand! ( ⸝⸝•ᴗ•⸝⸝ )੭⁾⁾ If you look closely, you’ll see her mic stand, adorned with a ribbon and flowers, is actually floating above her fingertips! It’s a bit hard to tell from photos, but the mic stand doesn’t actually attach at her hand.

The ribbon on the mic stand actually attaches to a section of her twintails!

You can see the decorations on the mic stand feature motifs from many of her different songs. ₍₍(∩´ ᵕ `∩)⁾⁾ Her twintails are decorated with similar ornaments too. Some are also siting on top of her head! Her skirt and corset feature a few decorations as well. A special page with a 360 degree viewer will go up on the 4th of July, so you can look at the whole figure and guess what each decoration comes from for yourself! ☆彡 Look at those STUNNING legs!

While slim and elegant, you can tell she’s quite muscular too. If you think of it like she’s become stronger over her 10 year journey, it really hits deep down! (；∀；)

Next, take a look at that face! Her expression is filled with hope for the future!

While you could call this just a figure… … I truly think when you look at the ten years of Hatsune Miku’s history incorporated into every element, it becomes something much more than just a figure. Be sure to add this masterpiece to your collection! Available for preorder from the 4th of July!

Preorders from the GOODSMILE ONLINE SHOP will comes with a clear file featuring the original illustration as a purchase bonus!