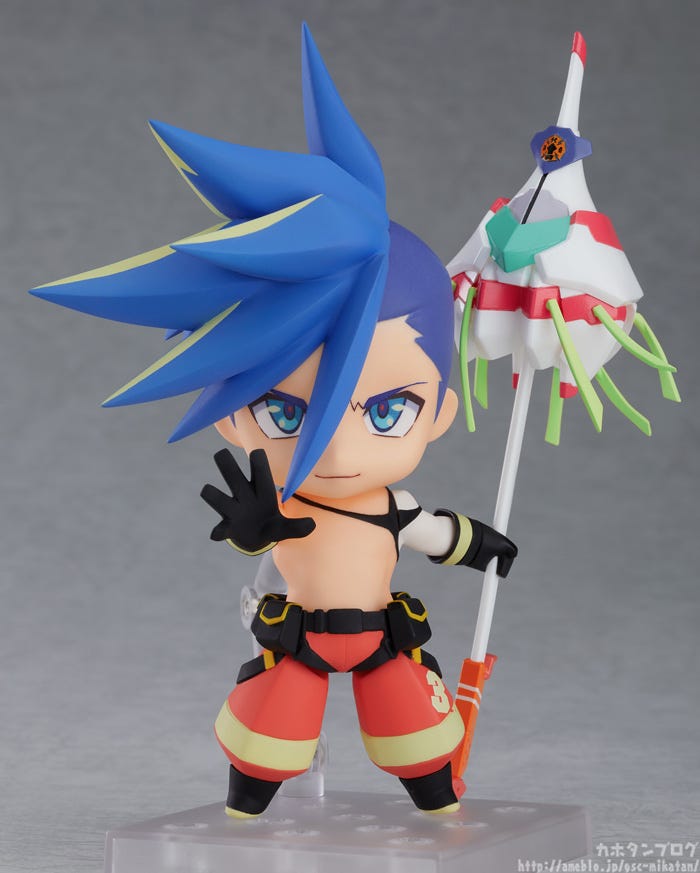 Today I’ll be taking a look at From the anime movie “PROMARE” comes a Nendoroid of the protagonist and member of Burning Rescue, Galo Thymos! Made under complete supervision of character designer Shigeto Koyama, Galo’s unique charm has been brought to life! He comes with two face plates including his confident standard expression and a shouting expression.

His Matoi Gear is included as an optional part. You can also recreate the scenes of him launching instant-extinguishing ice bullets with his Gaen Gear. Be sure to add him to your collection and recreate all of your favorite scenes!

“The only thing that should burn is your soul! My soul will burn to extinguish the flames!”

I loved the movie so I’m excited to introduce the Nendoroid today!

Let’s take a look starting from the back. As you can see, his muscular form has been recreated in Nendoroid size.

Everything from his hair to his pants and gloves really makes for a unique silhouette. The characteristic color scheme of the film has also been faithfully captured for this Nendoroid.

For example, you can even see the highlights in his hair have been painted!

Also, take a look at his left arm!

You can see that it is a lighter shade, just like in the character design! Next let’s check out his outfit! The black and yellow harness and his orange pants look stunning!

The number “3” on his pants has been clearly painted on too!

You can even see below the number, the orange paint splatter on his pants has been faithfully captured as well! How detailed!

His pants feature a fairly wide range of articulation.

Different from typical Nendoroid joints, these drawer joints make for an even wider range of potential poses.

He comes with two face plates! His second face plate is of his shouting expression! “My firefighting soul is on fire!”

What a cool expression!

It might be hard to see from the front, but this Nendoroid also features quite large hands! Definitely larger than most Nendoroids! （＠口＠）！

As seen earlier, his Matoi Gear is also included! The legendary Matoi Gear, said to have inherited the firefighting soul from a far eastern land.

Even the fluttering tanzaku on the Matoi Gear have been captured in the sculpt! Not only can he be posed raising it up, but also thrusting it forward!

He can also be posed launching instant-extinguishing ice bullets with his Gaen Gear. Using interchangeable parts, both the closed and opened forms can be recreated! Available for preorder from the 27th of June to the 1st of August!