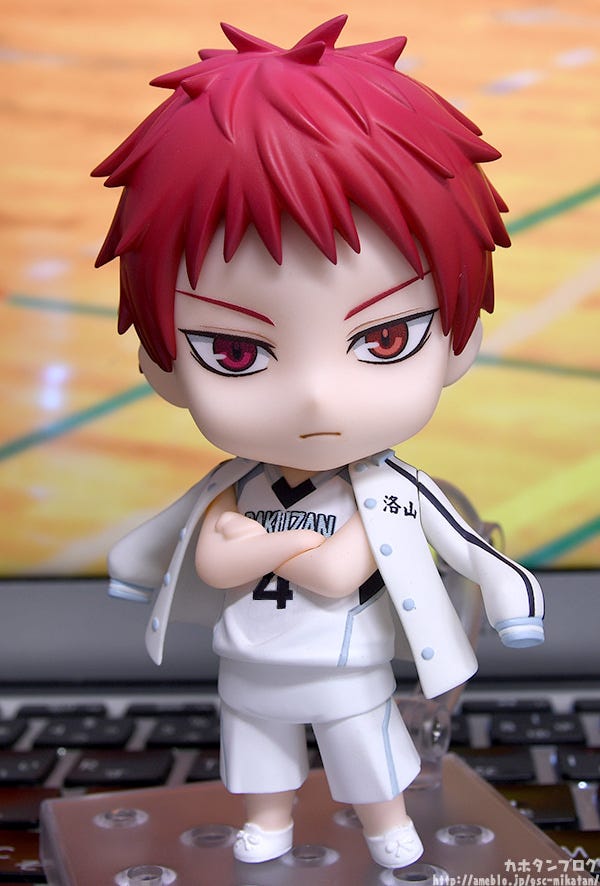 From “Kuroko’s Basketball”, the emperor of Rakuzan High, Seijuro Akashi, has been transformed into a Nendoroid! He comes with three face plates including his determined standard expression, his intense serious expression and his smiling expression.

For optional parts, he comes with a basketball, a book, shogi pieces + holding hand part as well as his Rakuzan jacket. Have fun recreating scenes of him on and off the court! Be sure to add him to your collection!

The emperor of Rakuzan High’s basketball team, Seijuro Akashi, has been transformed into an adorable Nendoroid!

*The school name and number on his jersey will be cleaner at release!

His short bangs and uniqueeyes have been carefully recreated, along with his white uniform. ▲You can see the Rakuzan logos on both the front and back of the jacket!

For optional parts, in addition to his Rakuzan High jacket, he also comes with a basketballl and pointed finger parts! ◎ ▲It looks like he’s giving instructions to a teammate in the middle of a match!

Additionally, shogi pieces and a special hand part for holding them are included! ♪ ▲You can see three tiny shogi pieces in his tiny Nendoroid hand! (ﾟ∀ﾟﾉ)ﾉ

He comes with three face plates including the standard expression shown above, as well as a serious expression, as though in the middle of calculating his opponent’s moves.◎ Bent arm parts are included for each arm, making it easy to pose him as though in the middle of a game! ～( ●∀○)っ

In order to give you an idea of just how much this expression differs from his standard expression, take a look at the pose of him with the basketball and pointed finger parts, only this time with the serious expression! ★ Totally changes the feeling of the pose, right?

Finally, his third expression is his relaxed smiling expression! It looks like he’s looking up from his book and giving us a smile! ( ；∀；) ▲If you cover his mouth, it gives off a slightly different nuance!◎

Also, did you notice? Look at his eyes…!!

Let’s take a look at this face plate with our previous comparison pose with the basketball and pointed finger hand parts! So what do you think!?

With how much these expressions change the impression you get from poses, you’ll be able to create so many different poses and situations! (o´v`o)ﾉ ▲Even just slightly changing his pose can have a real impact!

Available for preorder from the 20th of June to the 18th of July!

Preorders from the GOODSMILE ONLINE SHOP will include a special round base as a purchase bonus! Keep it in mind when preordering! ♪ Preorders for many products at the GOODSMILE ONLINE SHOP are closing soon! Here are the products closing 20th June 2019 (Thu) at 12:00JST!