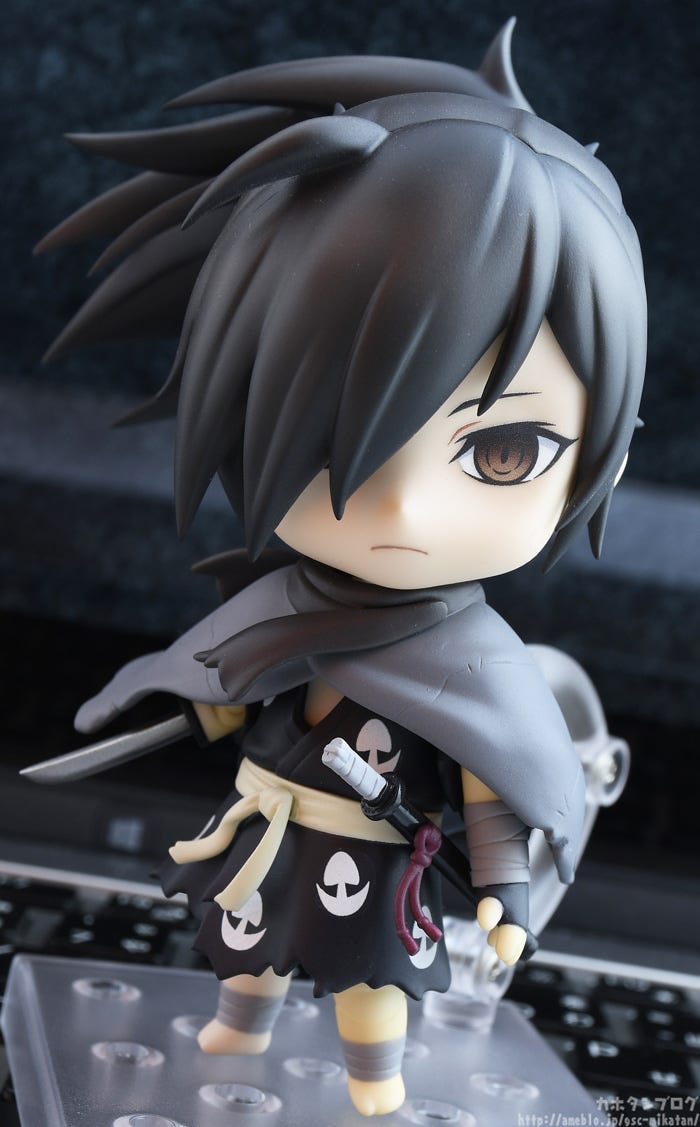 The final episode of Dororo is coming soon… are you ready? From the anime series Dororo comes a Nendoroid of the character whose body parts were stolen by 12 demons, Hyakkimaru! He comes with three face plates including his standard expression, a face plate with his prosthetic arm in his mouth from when he unsheaths his swords as well as an intimidating combat expression.

For optional parts, he comes with sword arm parts and prosthetic arm parts for each arm as well as his cloak for long travels. Be sure to add him to your collection!

“I will take back the body the demons stole from me.”

Hyakkimaru, the boy whose body parts were taken from him by 12 demons at birth, is now a Nendoroid! As you can see, his cloak is included! The scarf and patched up appearance have been created in great detail. The torn appearance of the hem of his kimono has been preserved in Nendoroid form as well, making for a detailed raggedy appearance.

In addition to his standard expression, an expression showing him with his prosthetic arm in his mouth is included to display him as though unsheathing his swords! That gaze in his eyes really completes this expression! So cool!

By the way, his sword arm parts are fully articulated!

Recreate all kinds of combat poses!

As for his next face plate… The sharp gaze and shouting mouth of this demon-like expression really makes an impact. ▲Of course, both arms can be displayed unsheathed! Look closely and you can see that the left and right legs are different colors!

The different color of his prosthetic and real leg has also been taken into account! You can also see a circular doll-esque joint sculpted in his left leg!

Even in Nendoroid form, there’s so many details!

By the way, not only are his arms and legs articulated, his hair also features two points of articulation!

▲Change his hair to match his pose!

For example, you can recreate his hair from the key visual! Available for preorder from the 18th of June to the 8th of August!

Preorders for many products at the GOODSMILE ONLINE SHOP are closing soon! Here are the products closing 20th June 2019 (Thu) at 12:00JST!