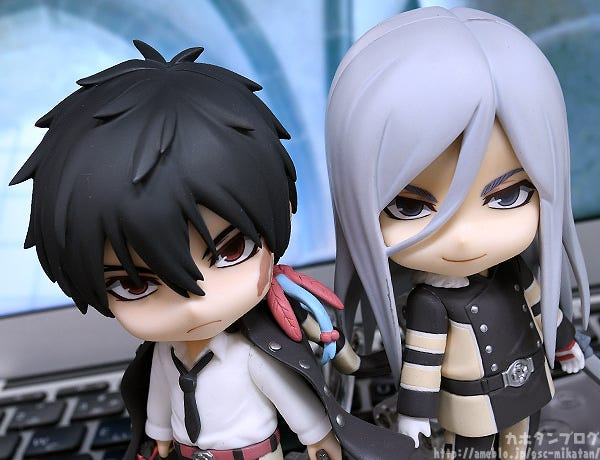 Here is the “Reborn!” Nendoroid series so far!★ Let’s get back to today’s items! ♪ From the legendary anime series “Reborn!” comes Nendoroids of the Vongolia Family’s independent assassination squad, Varia! First up is SQUALO in his Ten Years Later appearance! He comes with three face plates including his determined standard expression, his smiling expression and his angry expression, as though shouting out “Voi!”

His flowing long hair has been perfectly recreated! ▲Everything about his outfit right down to his feet has been carefully recreated! ◎

He comes with three interchangeable face plates including his standard expression as well as his particularly loud smiling expression! ☆ Squalo’s favorite: a tuna has been brought down to Nendoroid size as well! ♪ ▲The subtle gloss of the fish looks great! (You can hear his voice in your head while looking at this face, can’t you?)

His left hand parts in this picture are quite finely sculpted! They’re very versatile, so you can make poses like this too! With his standard expression, it makes him look somewhat mysterious!

By the way, I’d also recommend pairing his angered expression with the tuna! ( ・ﾉω・) Have fun posing him with his optional parts when you take him home! ◎

Preorders of Nendoroid SQUALO from the GOODSMILE ONLINE SHOP by the 20th June (Thu) will come with a (Boss’ Favorite) Steak + Special Hand Part as a bonus! ♪ From the legendary anime series “Reborn!” comes Nendoroids of the Vongolia Family’s independent assassination squad, Varia! Next is Varia’s leader, XANXUS, in his Ten Years Later appearance! He comes with three face plates including his displeased standard expression, his intrepid smiling expression and his angered expression.

His jacket is removable, and he comes with a special sofa and two guns as optional parts, making for a truly grand set fit for the boss. Be sure to add him to your collection along with Nendoroid SQUALO (sold separately) and enjoy Varia Quality!

“The only way to deal with scum is to eliminate it!”

Both sides of his jacket are articulated, allowing you to move it to match his pose! ▲Check out the crest on his left shoulder!

His two guns are included along with special arm parts, allowing you to pose him holding his weapons! ◎ ▲You can even see his trigger finger! ヾ(o´∀｀o)ﾉ

Next, he also comes with a sofa as an optional part! What a cool part! Leave it to FREEing to make a great set like this.( ・ㅂ・)و ̑̑

Parts to display him in the chair are also included for easy posing!

He comes with three face plates, including his standard expression as well as his intrepid smiling expression! That confident expression is so fitting for the Boss! I love it! ▲What a determined gaze! (〃∀〃) You can really feel the tension looking at those smaller pupils and shouting mouth! ٩(๑`^´๑)۶

（Even in Nendoroid size this face is intense!）

Preorders of Nendoroid XANXUS at the GOODSMILE ONLINE SHOP by the 27th of June 2019 will receive “Driving out the Shark” Special Kicking Parts as a purchase bonus! ▲Have fun displaying him with Nendoroid SQUALO! ♪

Be sure to add them to your collection! Check out every announcement at our Twitter page here!

Preorders for many products at the GOODSMILE ONLINE SHOP are closing soon! Here are the products closing 13th June 2019 (Thu) at 12:00JST!