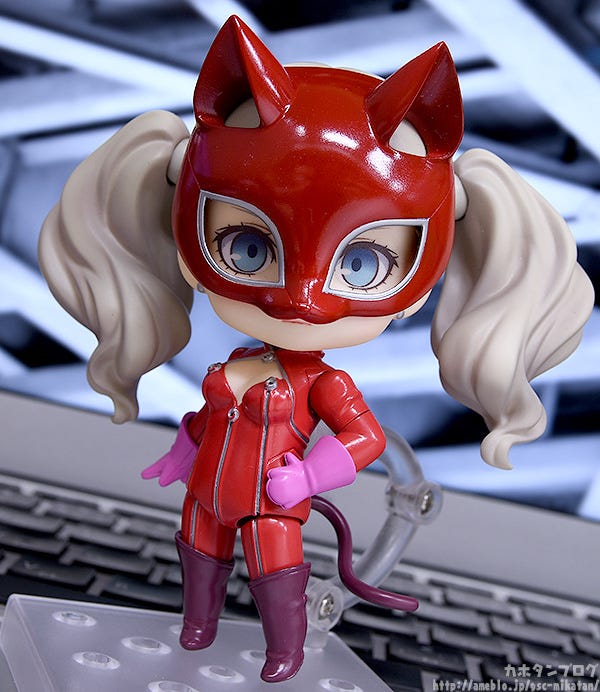 Today is the last day of May!

WonFes Shanghai is next month, so I’m ready to work hard throughout June too! ٩( ᐛ )( ᐖ )۶ From the popular anime series “PERSONA5 the Animation” comes a Nendoroid of the one-quarter American beauty also known as Panther, Ann Takamaki, in her phantom thief outfit! She comes with several optional parts including her whip, submachine gun and a miniature sized mask she can be posed holding! Additionally, a cut-in sheet is included to recreate Persona summoning sequences and All-Out Attack finishes!

She comes with three face plates including a standard expression, an angry expression and a winking expression. Be sure to add her to your collection, along with the other Persona series Nendoroids!

“Can I beat that loser?”

The Phantom Thieves’ Ann Takamaki has been transformed into a Nendoroid in her Phantom Thief outfit!

Her voluminous twintails, glossy Phantom Thief outfit and her mask have all been carefully recreated! A ball joint is included in her tail, allowing you to easily move it to match her pose! ◎

As for Panther’s indispensable whip, two versions are included with this Nendoroid! ((｀・∀・´)) The long version allows you to recreate this memorable pose! ★ The shorter version is planned to be a bit more flexible, allowing you to make it whatever shape you want! As for face plates, she comes with her standard expression as well as an impassioned angry expression!

Finally, a winking expression is also included for a total of 3 face plates! ★ …so let’s see what’s BENEATH THE MASK! You can really feel Ann’s strong sense of justice just looking at this face plate.

Next is her angry expression! The change in her eyebrows really makes her gaze extra sharp. (人´v｀) Ah!! The shape of her mouth is ADORABLE!

Right down to the lips, this winking expression is just… angelic!

As you can see, in addition to the previously introduced whip, she also comes with a handheld miniature mask and a submachine gun! ♪ Additionally, a cut-in sheet & attachment parts are included for you to recreate All-Out Attack seuquences!

Be sure to check the official product page when it goes up to see the picture! ε=ε=(ﾉ*・∀・)ﾉ Check out every announcement at our Twitter page here!

Preorders for many products at the GOODSMILE ONLINE SHOP are closing soon! Here are the products closing 6th June 2019 (Thu) at 12:00JST!