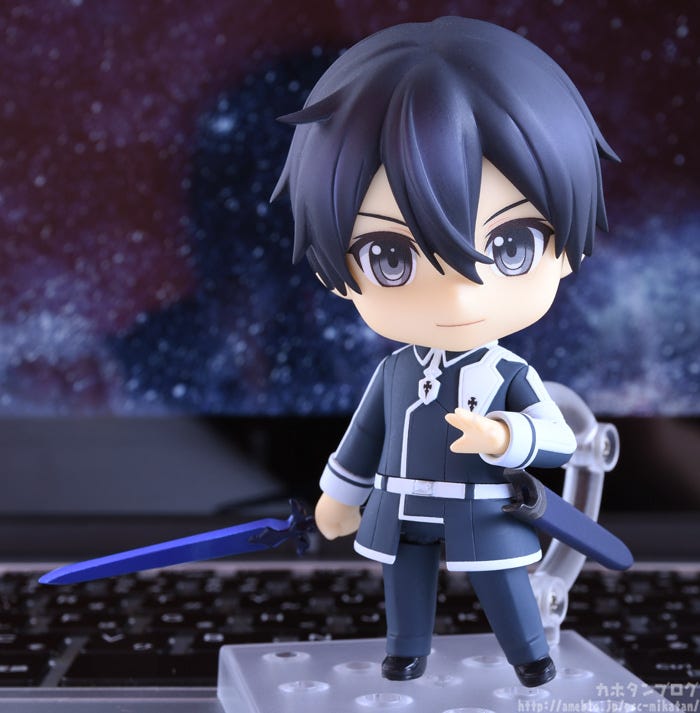 From the anime series “Sword Art Online: Alicization” comes a Nendoroid of Kirito in his Elite Swordsman outfit! He comes with three face plates including his standard expression, his combat expression and his crying expression from when he lost what was dear to him.

His «Night Sky Sword» and Gigas Cedar effect parts to recreate his «Armament Full Control Art»! A pointed finger part is included to recreate his secret handshake with Eugeo. The «Red-Rose Sword» he received from Eugeo is also included. Be sure to add him to your collection!

From “Sword Art Online: Alicization” comes a Nendoroid of Kirito!

As for optional parts, he comes with his ≪Night Sky Sword≫ ▲You can see how different parts of the blade are painted to make it stand out.

Of course, his sheath is also included along with his sword.

Display with Nendoroid Eugeo and…! You can display the two of them using ≪Aincrad Style≫!

As for face plates, in addition to his standard expression, he comes with his combat expression! The effect is recreated with translucent parts!

Particularly, the effect is sculpted to look like bark and roots.

Next up, his third expression is his crying expression! From that heartwrenching scene… ・ﾟ・(つД｀)・ﾟ・

For you, as many times as it takes.” The «Red-Rose Sword» is included!

Eugeo’s sword, dyed in deep red. The rose on the hilt has been clearly sculpted!

Finally, I want to introduce one more part! A pointed finger hand part to recreate Kirito and Eugeo’s secret handshake from the opening is included!

Be sure to display him with Nendoroid Eugeo!

He’ll be going up for preorder soon, so keep an eye on the Good Smile Company official site for details! Preorder from the GOODSMILE ONLINE SHOP until the 13th of June (Thu) at 12:00JST Preorder from the GOODSMILE ONLINE SHOP until the 13th of June (Thu) at 12:00JST

Preorders for many products at the GOODSMILE ONLINE SHOP are closing soon! Here are the products closing 23rd May 2019 (Thu) at 12:00JST!