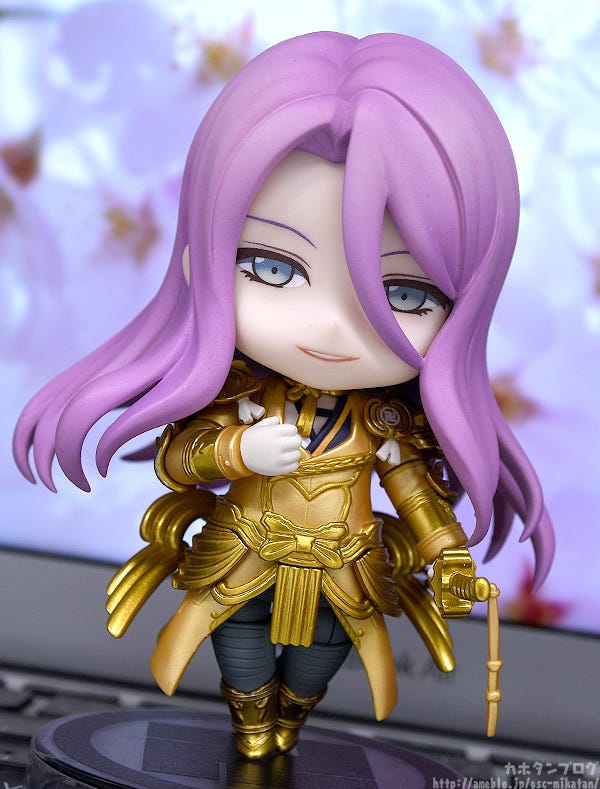 Thanks to everyone that tuned into the livestream earlier! From the popular browser and smartphone game “Touken Ranbu -ONLINE-” comes a Nendoroid of sword handed down through the Hachisuka clan, Hachisukakotetsu! He comes with three face plates including a standard expression, a combat expression and a smiling expression based on his “Leave it to me.” line from the game.

His sword can be displayed either sheathed or drawn. His clothing and armor has been carefully painted to show a difference in textures, making for a strikingly detailed appearance. Be sure to add him to your collection!

“I’m Hachisukakotetsu. I’d like it if you didn’t assume I was a counterfeit.”

From Touken Ranbu -ONLINE- comes a Nendoroid of one of the starter swords: Hachisukakotetsu! ◎

His elegant flowing lavender hair has been carefully recreated in Nendoroid size. Small details like the uniform decorations and kimono tucked in around his neck and the intricate pattern of his shoes have all been faithfully captured. (*ˊᵕˋ*)

Of course, I have to mention his beautiful golden uniform. ▲You can clearly see the differences between the cloth and armor parts thanks to the texture and glossiness of the paints! ♪

The intricacies of his armor and small details like his one gathered strand of hair have been meticulously recreated in Nendoroid form! ▲Even in Nendoroid form he looks dazzling!

He comes with three face plates including his standard expression shown above, as well as his gallant combat expression!◎ ▲Looking from above, you can feel the intensity in his eyes!

His sword can be displayed either sheathed or drawn using interchangeable parts! ヽ(･ω･´三`･ω･)ﾉ The decoration on the hilt of his sword is attached with a ball joint, allowing you to change its angle with his pose!

Using this face plate without his sword drawn… “Nagasone…? He’s not my brother or anything. He’s a fake who uses the name of the Kotetsu clan.”

You can almost hear his voice line just looking at it. (｡´∀`)ﾉ

As for his third expression, it’s his

smiling expression as though saying his “Leave it to me.” voice line from the game! That somewhat smug look in his face is perfect!

As you may have noticed, this pose is from the Touken Ranbu Second Anniversary illustration! ( ・ㅂ・)و ̑̑ ▲The sculpting of his fingers is also impressive! ◎

You can create quite a few different poses with this hand part! (*・ﾉｪ・)ｺｯｿﾘ Using the hand part I used earlier with his combat expression, you can create a pose as though he is relaxing in the castle walls! ♪ ▲“Urashima Kotetsu is my younger brother… He gets along with everyone, and he’s adorable.””

Of course, he comes with a special round base! ヾ(o´∀｀o)ﾉ Available for preorder from the 16th of May (Thu)!

Preorders from the GOODSMILE ONLINE SHOP will come with a Nendoroid Plus Rubber Strap: Hachisukakotetsu “Leave it to me.” Ver. as a purchase bonus! ◎ Nendoroid Pouch: Sleeping Bag (Hachisukakotetsu Ver.) will also be available for preorder, so make sure to grab both! ((｀・∀・´)) Preorders for many products at the GOODSMILE ONLINE SHOP are closing soon! Here are the products closing 16th May 2019 (Thu) at 12:00JST!