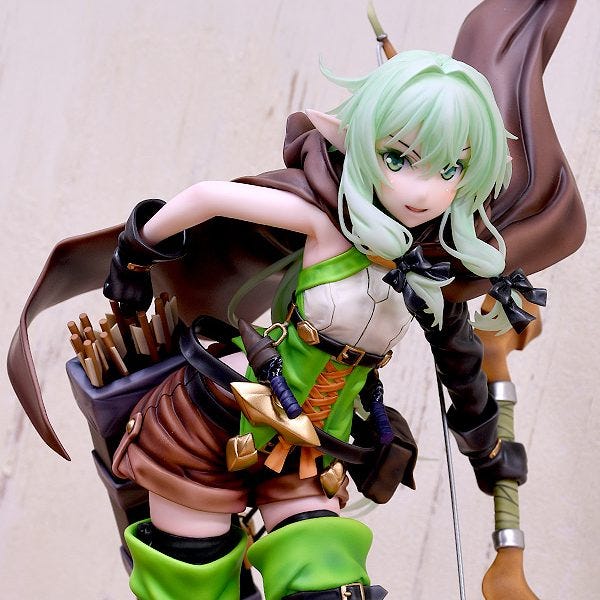 Today I’ll be taking a look at Phat! Company’s From the popular anime series “GOBLIN SLAYER” comes a 1/7th scale figure of one of Goblin Slayer’s party members, High Elf Archer! The figure is based on her apearance from the cover illustration of the 2nd volume of the light novel!

Not only have her large bow and quiver been faithfully recreated, the fine details of the decorations on her outfit and her obsidian daggers have been meticulously captured as well. Her hair has been recreated using translucent parts, gending her a mystical aura fitting for a High Elf. Be sure to add her to your collection!

“One day I’ll make him go on a real adventure.” The figure captures her pose as she breaks out into a run. This lively pose was featured on the cover of the 2nd volume of the light novel! ▲You can see how light she is on her feet, even with her bow that is practically her height!

You can see the detail in the nuance of her fingers as she pulls an arrow from her quiver. The texture of her gloves is accurately portrayed through the paintwork! You can see her tight grip on the bow in her left hand as well!

You can really sense her skill with a bow! ヽ(･ω･´ ） ▲Looking from the back you can see her quiver is strapped to her belt! It almost looks like a bob cut, but is actually quite long! Perfectly captured all the way to the tips. ♪ Her hair has been recreated using translucent parts and a coating over the top, giving it a mystical look fitting for a high elf. The decorations and weapons around her abdomen have been meticulously recreated as well. ヾ(*´∀`*)ﾉ Things like her obsidian knives sheathed under her chest, the gold adornments on her belts and the different textures of her clothing have all been carefully captured!

Be sure to check everything out when you take her home! ♪

Available for preorder from the 23rd of April

This is the 2nd “GOBLIN SLAYER” figure from Phat! Here is the first! ♡ Preorders for many products at the GOODSMILE ONLINE SHOP are closing soon! Here are the products closing 25th April 2019 (Thu) at 12:00JST!