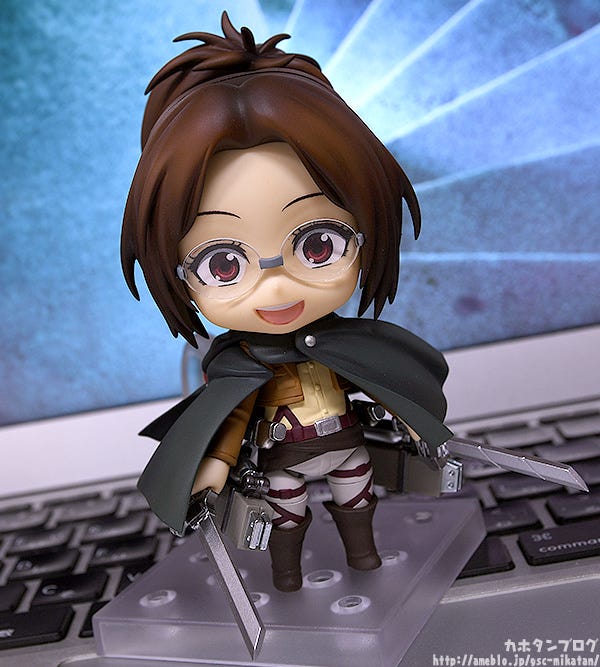 One side of my glasses is broken at the nose… I really need to get these fixed! From the popular anime series “Attack on Titan” comes a Nendoroid of Survey Corps Squad Leader Hange Zoë! She comes with three face plates including her standard expression, her smiling expression often seen in battle and her excited expression after being shown a Titan!

She comes with plenty of optional parts including her Vertical Maneuvering Gear, dual blades and effect parts to recreate midair movements. She also comes with her goggles and the report sheet she uses when studying titans, allowing you to recreate far more than just combat scenes. Her Survey Corps cape is included as well. Be sure to add her to your collection of Attack on Titan Nendoroids!

“It was the individual choices of people that changed the world.”

From the anime series “Attack on Titan” comes a Nendoroid of the Survey Corps’ 14th Commander, Hange Zoë! ◎

Everything from the cape and jacket of her Survey Corps uniform to her trademark glasses has been carefully recreated! ▲You can even see the Wings of Freedom insignia on her jacket!

The support arm is longer than usual, allowing you to easily recreate midair combat scenes! ♪ Be sure to use the included goggles and her interchangeable smiling face plate to accurately recreate Hange’s combat appearance! ヽ(･ω･´ ）

This Nendoroid includes the standards of the Attack on Titan Nendoroid series: This time the cape features a brand new sculpt!

The cape has the same three-panel design as before, but now features even more in-depth articulation, allowing you to match it to poses easier than ever before ((｀・∀・´)) In addition to her previously introduced standard and smiling face plates… From the time she touched a Titan, it’s her excited expression! ★

That drool sliding down her chin is a highlight of this face plate! (*´﹃｀*)

She also comes with a report sheet as an optional part. Paired with the excited expression, it looks as though she’s overwhelmed by the results of her research! ▲With her glasses on, you can get a better look at her red cheeks and glistening eyes!

＼ “Offer up your hearts!” ／ Parts to recreate the Survey Corps’ salute are included! ◎

A special hand part for Nendoroid Levi (sold separately) is also included for him to make this pose as well! I got a quick shot of Hange with him and Nendoroid Erwin Smith to demonstrate!

Available for preorder from the 18th of April!

Preorders for many products at the GOODSMILE ONLINE SHOP are closing soon! Here are the products closing 18th April 2019 (Thu) at 12:00JST!