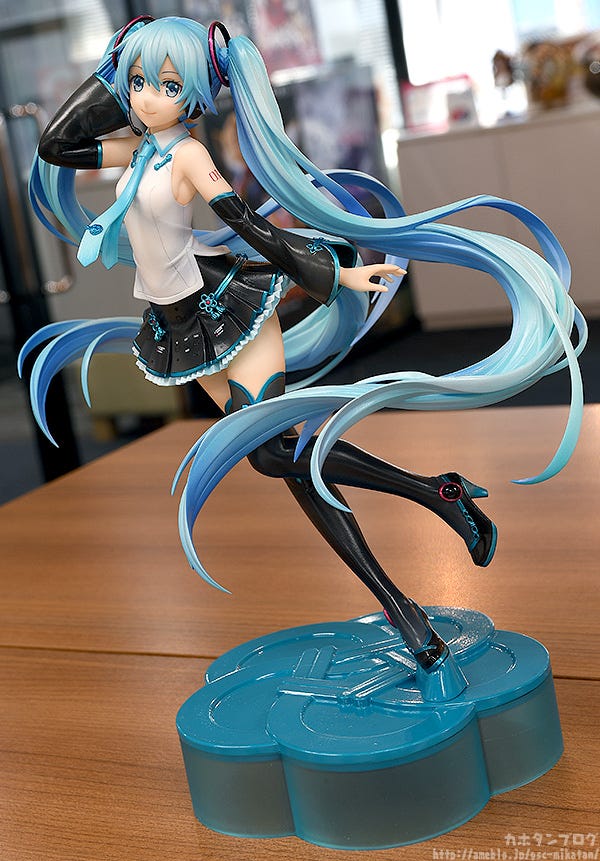 The Chinese version of Hatsune Miku, Hatsune Miku V4 CHINESE, has been transformed into a 1/8th scale figure! The visual created by illustrator mamenomoto has been faithfully brought to life. Her twintails appear to flutter in the wind as Miku looks on with a smile on her face. Her outfit includes various Chinese motifs making for a highly detailed sculpt. The adjustable base features a flower design based on the flowers adorning her skirt. Be sure to add her to your collection!

The electronic diva popular in China is now a scale figure!

After revealing her on March 9th, Miku Day, we’re finally getting close to opening preorders! (( つ•̀ω•́)つ

Her flowing twintails have been meticulously sculpted for an accurate recreation of the original illustration. ▲You can see the detailed gradation added in to the paintwork of her hair as well! ♪

All of the accessories adorning her outfit have been carefully recreated. ◎ ▲Metallic paints have been used to show texture differences between her accessories and clothes!

Let’s take a look at her skirt! Of course, the frilled edges have been carefully sculpted, but you can also see the skirt’s keyboard-based design!( ・ㅂ・)و ̑̑

Because her outfit is fairly simple, these tiny details have been recreated as faithfully as possible.

Take a look everywhere when you take her home! ★

Miku’s light and elegant body is another highlight of this figure! ▲You can catch a glimpse around her skirt here… perfect, right? ▲She looks great from the back too! ヾ(o´∀｀o)ﾉ

V4 CHINESE Miku has a somewhat more mature charm to her.

The small red accent around her eye is a great touch too! ◎ Her soft looking skin, glossy outfit and winding twintails are all so beautiful… be sure to take a long look at everything when you take her home!★

The base is made based on the flower decorations on her skirt. It has a nice lacquered look to it. (∩｡•ｏ•｡)っ ▲The translucent part can be removed too!

Available for preorder from the 22nd of March (Fri)! Available for preorder at the GOODSMILE ONLINE SHOP until the 21st of March (Thu) at 12:00JST Available for preorder at the GOODSMILE ONLINE SHOP until the 11th of April (Thu) at 12:00JST