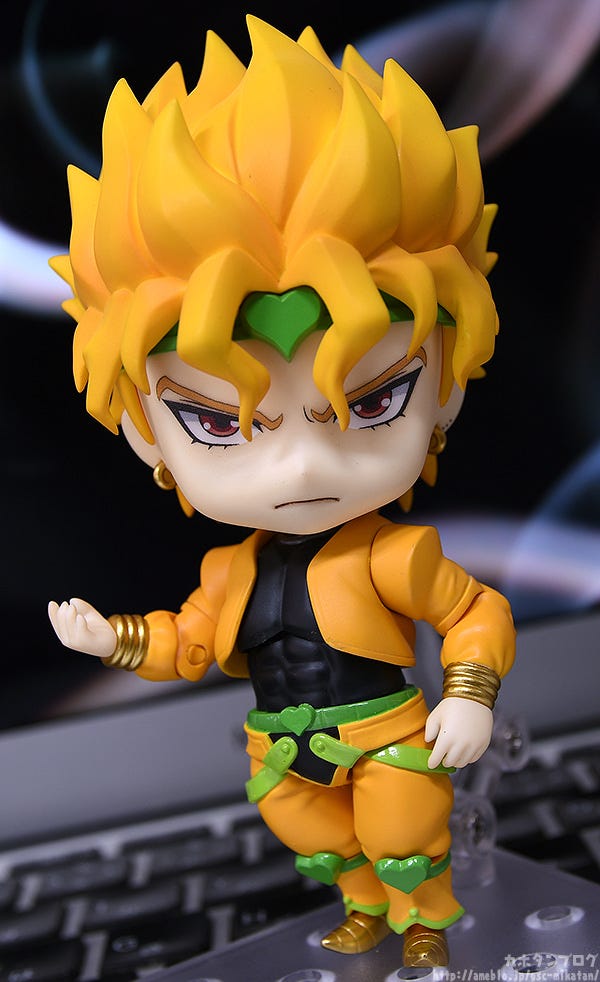 From the anime series “JoJo’s Bizarre Adventure: Stardust Crusaders” comes a Nendoroid of the longtime enemy of the Joestar family, DIO! The figure is fully articulated so you can display him in a wide variety of poses. He comes with three face plates including his standard expression, his sneering expression and his crazed expression.

For optional parts, he comes with the knives from his fight with Jotaro, a street sign and more! Use the various included special hand parts to recreate different scenes from the series. An effect part based on his stand, The World, is also included for recreating battle scenes! Be sure to add him to your collection along with the other Nendoroids from the JoJo series!

The Nendoroid is fully articulated, making it easy to recreate cool action poses!

His heart motif circlet and brightly colored outfit have been faithfully recreated in Nendoroid size! ♪ ▲His unique hairstyle has been carefully recreated as well!

Even in Nendoroid size, you can see his muscles clearly through his outfit! ( •̀ᄇ• ́)ﻭ✧ ▲Both glossy and matte paints have been used to illustrate different textures.◎

He comes with three face plates including his calm standard expression! ▲Special crossed arm parts are included for this pose! ♪

His sneering expression is also included! As for optional parts, he comes with knives and special hand parts! ★

These are from his fight with Jotaro! Effect parts based on The World are also included! Pair with the previously released Nendoroid Jotaro Kujo to recreate your favorite scenes from the show! ～٩( ‘ω’ )و ▲Recreate their fights in Nendoroid size! The intesity of the show has been brought to the Nendoroid series! ◎ Street sign parts are included as well, so recreate this memorable pose of DIO as well! ☆ Available for preorder from the 19th March (Tue)!

Additionally, preorders of this item from the GOODSMILE ONLINE SHOP or the Medicos Online Shop will come with a Shadow Face Plate as a purchase bonus! ◎ ▲Enjoy this mysterious expression as well!