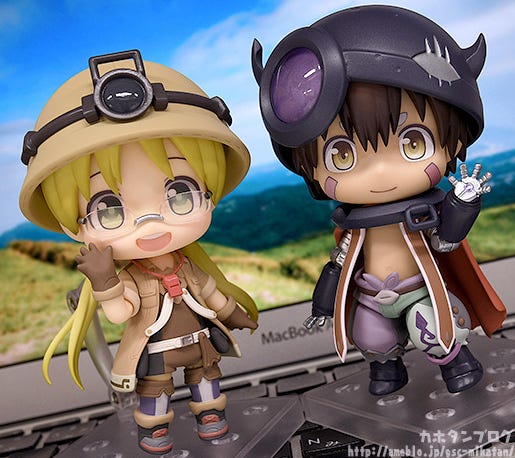 Today is Christmas in Japan! Oddly enough, after the whole Christmas season it feels like the Christmas feeling starts to fade around this time…! From the anime series with a movie releasing on the 4th of January, “Made in Abyss”, comes Nendoroids of Riko and Reg!

They’ve been brought down to Nendoroid size while maintaining their characteristic appearances from the show!

These are the second and third Made in Abyss Nendoroids following Nendoroid Nanachi! (๑•̀ㅁ•́๑) From the popular anime series “Made in Abyss” comes a Nendoroid of Riko! She comes with three face plates including her standard expression, her starry-eyed expression and her gentle smiling expression! Her red whistle and helmet can be removed!

“There must be an answer in the Abyss!”

The delver with dreams of becoming a White Whistle, Riko, has been transformed into an adorable Nendoroid! ♪ Everything from her red whistle to her delving outfit has been carefully recreated! ◎ ▲Her twintails have ball joints at the bases, making for easy posing!

by the way, her hat is removable making for multiple display options!
ヽ(´∀`*)ﾉ ▲That round head… she’s so cute! I just want to pat it!

She comes with thee face plates, including her standard expression and her starry-eyed expression! Special arm parts have been included to recreate her pose touching her cheeks! ( ✧Д✧)

Finally, her third expression is her gentle smiling expression! I can feel the warmth of that adorable expression from here!

By the way, the blue whistle around her neck is the GOODSMILE ONLINE SHOP purchase bonus! ヾ(･∀･)ﾉ Be sure to keep it in mind when preordering! From the popular anime series “Made in Abyss” comes a Nendoroid of the humanlike robot “Reg”! He comes with three face plates including his cute and cool standard expression, his awakened expression from battles and his embarrased blushing expression! His helmet and mantle can be removed, so enjoy posing him in various situations from the show!

The robot found in the abyss that looks exactly like a human, Reg, has been transformed into a Nendoroid! ★ ▲The gap between those robotic arms and hands and his cute stomach and belly button is adorable! ▲His tattered mantle and helmet have been carefully recreated! ◎

By the way, his helmet and mantle are removable for more display options! ♪ ▲His head decorations are included as interchangeable parts for when displaying him without his helmet!

He comes with three face plates including his standard expression and his awakened expression seen in battle. (｀・ω・´) An extended arm and incinerator sheet are included, so have fun recreating scenes of Reg protecting Riko! Those slightly redder cheeks are adorable! You can recreate all kinds of scenes with this!

Preorders of Nendoroid Reg from the GOODSMILE ONLINE SHOP will come with a Special Background Sheet as a purchase bonus! ◎ *The above sheet is reinforced for the purpose of photographing.

They’re both great on their own but are even more fun as a pair! Recreate all of your favorite scenes from the show when you take them home! ヽ(○`･v･)人(･v･´●)ﾉ

Be sure to add them to your collection! Available for preorder from the 26th of December (Wed)!

Look out for Nendoroid Nanachi, scheduled to ship out January 2019! Thank you for your patience!