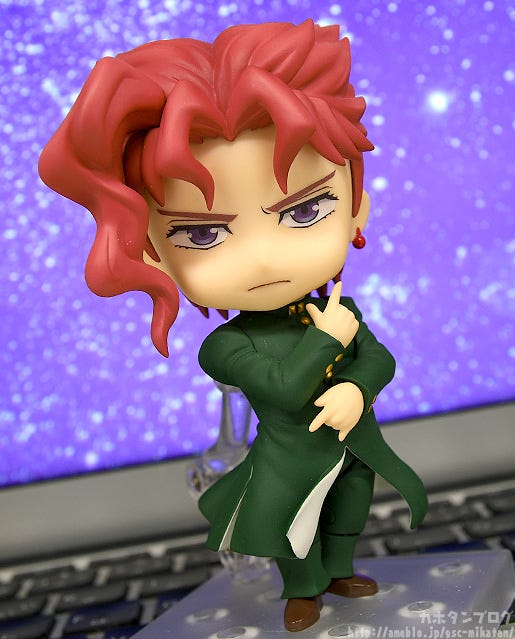 From the anime “JoJo’s Bizarre Adventure: Stardust Crusaders” comes a Nendoroid of the calm and composed Noriaki Kakyoin! The figure is fully articulated so you can display him in a wide variety of poses. He comes with three face plates including his standard expression, his intrepid emiling expression and his cherry-eating “Rero Rero” expression!

His smiling expression features scarred eyes from after his fight with N’Doul, so sunglasses are included as an optional part! Including a hand holding his beloved cherries, he comes with several different hand parts allowing you to recreate your favorite scenes from the series.

Effect parts based on his stand, Hierophant Green, are included as well so you can easily recreate battle scenes. Be sure to add him to your collection along with the previously announced Nendoroid Jotaro Kujo!

“It’s time for your punishment, baby.”

Everything from his deep green clothes to his unique hairstyle has been carefully recreated! ▲Look at that beautiful curl! ▲His earrings have been sculpted as well! ! (∩ˊ꒳​ˋ∩)

In addition to posing him in his famous pose with that determined face, you can do a whole bunch more! Using the included Hierophant Green effect parts, you can easily pose him as though in battle! ★ ▲You can see hands are clearly sculpted on the reverse side!

The effect part comes with a special stand, allowing you to independently place it! In addition to his standard expression face plate shown above, he also comes with this expression! Ah…? We can’t see the most important part with your sunglasses on!

Under those cool sunglasses you can see…

This smiling expression features scarred eyes from after his fight with N’Doul! Please take a closer look at this elegant, gentle smile when you take him home! ◎

Finally, I’ll bet you’re wondering what his third expression is…! His tongue and cherry are clearly sculpted!

He includes special hand parts to show him holding more cherries too!

Recreate that famous scene with these parts! ◎ ▲Rolling those cherries around his mouth while gazing out the window… I did my best to recreate the scene in this picture! Preoreders from the GOODSMILE ONLINE SHOP  will receive a Handshake Hand Part  as a purchase bonus!