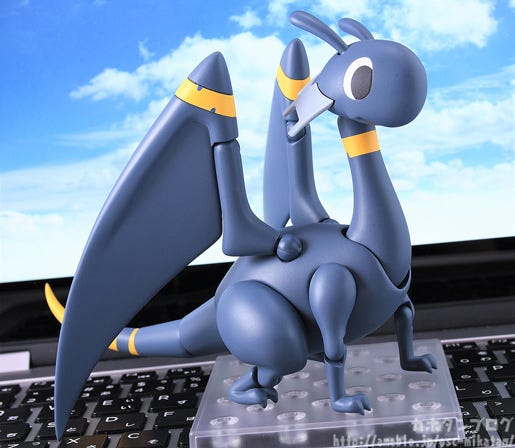 In the first combat flight simulator I played I used an F-15J! From the popular anime series “DRAGON PILOT: Hisone and Masotan” comes a Nendoroid More of the dragon camouflaged as an F-15J, Masotan!

A standard face part and open mouth face part are included. Parts to display Hisone getting out are included as well. Interchangeable eye parts to change Masotan’s expression are also included. Be sure to add him to your collection!

The OTF Masotan has been transformed into a Nendoroid More figure!

From head to tail he is longer than 20cm! Incredible! Compared to a AA battery. This should demonstrate just how big Masotan is!

Ah, by the way, did you notice? Not only is Masotan big, but also highly articulated! Look at the wings, for example!

You can see that the wings feature Nendoroid joints! I imagined Masotan fishing off the coast of that uninhabited island when I took this picture!

Two joints are in each wing making for a wide range of possible poses!

Recreate poses straight from the show!

Up, down, left and right! They can be moved in all directions.

You can move his tail too, of course! Let’s take a look at some other points of articulation.

▲What a wide range of movement!

Look at his ears too! Both the ears and two points of his neck are articulated!

Next up let’s take a look at Masotan’s F-15J camouflage! So cool! So cute!

Each piece fits on perfectly! Take a look at his back legs for a second! Afterburners attach to his legs!

By the way, same as the front legs, the back legs have a bent and extended version included! The cockpit at his neck is recreated with translucent parts! What a nice blue color.

Let’s take another look at the wings now!

These are articulated too!

The wings are so big when you fully spread them out.

Next let’s take a look at his face! As you can see, front and back facing eye parts for both eyes are included! It looks like he is yawning! As you can see, half-open eye parts are included too!

Finally… After a flight, a D-pilot must be sure to evacuate before being dissolved in there.

Yep, you can recreate that too with this Nendoroid More!

(If you’re in the middle of eating right now, you might want to save the rest of this article for later!) As you can see in this part, Hisone Amakasu is included too! Available for preorder from the 13th of December (Thu)!

Preorders from the GOODSMILE ONLINE SHOP will include a “Gifu Air Base OTF Corps” Special Base as a purchase bonus! Preorders for many products at the GOODSMILE ONLINE SHOP are closing soon! Here are the products closing 13th December 2018 (Thu) at 12:00JST!