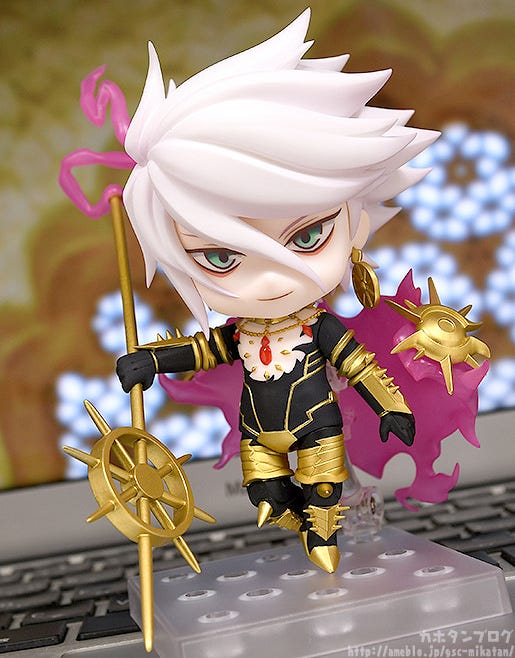 From the popular smartphone game “Fate/Grand Order” comes a Nendoroid of Lancer-class servant Karna! He comes with three face plates including his smiling standard expression, a shouting expression and his magic eyes expression as though saying his “Weapons are for beginners. A real hero will kill you with just their eyes!” line from the game!

“Weapons are for beginners. A real hero will kill you with just their eyes!”

Originally from the Indian epic “Mahabharata”, the legendary hero Lancer/Karna has arrived as an adorable Nendoroid!

His impressive costume has been recreated faithfully based off the original illustration, with translucent parts being used for the fire! ♪ ▲His lovely pale skin has been recreated as well!

He comes with three expressions including a standard expression and a shouting expression! (｀・ω・´)

Feel the mercy of the King of Gods,

you will be destroyed with this one strike… I will burn it all! As you may have noticed, his leg parts are fully articulated, allowing for easy posing as though he is in the middle of the action!

As for his third face plate…

Weapons are for beginners. A real hero will kill you with just their eyes! Based on his extra attack in the game, his magic eyes expression is also included! (✧Д✧ ) The attack can easily be recreated with the included effect parts! His right eye is red to faithfully match his in-game appearance! The Earrings of the Setting Sun he gave to his Master on Valentines Day! Such a splendid gift can even be enjoyed in Nendoroid form! Available for preorder from the 4th of December (Tue)!

*There will be no DX version for this product.

Preorders for many products at the GOODSMILE ONLINE SHOP are closing soon! Here are the products closing 6th December 2018 (Thu) at 12:00JST!