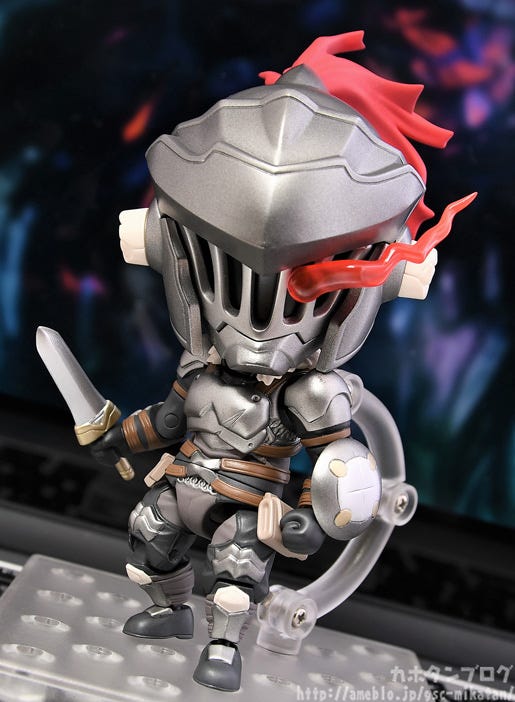 From the popular anime series “GOBLIN SLAYER” comes a fully articulated Nendoroid of the odd adventurer who only accepts goblin extermination quests – Goblin Slayer! His specialized armor for fighting goblins has been faithfully recreated in Nendoroid form.

Translucent parts have been used to create an optional part of his distinct eye glint effect! He also comes with a sword, a torch and a blood-dripping club. A goblin figure is included as well, allowing you to recreate your favorite battle scenes from the show! Be sure to add him to your collection!

“I’m not saving the world. Everything from that sturdy-looking helmet to the fine metal fittings around his hips has been faithfully recreated in Nendoroid form!

First thing I want to take a look at is the eye glint effect part!

You can easily recreate his impressive appearance from the show!

It’s easy to put on and take off to make displaying easy! Next let’s take a look at his blood-dripping club. “The only good goblins are the ones who never come out of their stinking holes.”

The club has a dripping blood effect, just like the club he retrieved following that tragic scene in the cave.

So, of course, this club is one of Goblin Slayer’s standard weapons that he stole from a goblin.

A wretched goblin is included as well! Next, a torch is also included! Translucent parts are used for the fire giving it a high-quality appearance.

The torch can be held by goblins as well!

Next, some of you may have already noticed but…

His elbows, knees and ankles are all easily movable, making it easy for him to kill more goblins! Next up is a very special feature of this Nendoroid…

Hiromi Sangyo’s Milight 435R LED (sold separately) can be attached to his head like this! Can you see his eye shining?

I tried taking picture of him with the LED in a dark room! I took this shot with only the lighting from my computer and keyboard to illuminate him!

The eye glint effect part can also be attached with the LED in place!

Since the eye glint effect utilizes clear parts, the light diffuses evenly through the part! Available for preorder from the 27th of November (Tue)! ・Just outside the 3rd Exit at Suehirocho Station on the Tokyo Metro Ginza Line.
・6 minute walk north from the Electric Town Exit at JR Akihabara Station.

New figures from Good Smile Company, Max Factory and many more companies will be on display, so be sure to stop by if you’re in the area! Behind the scenes of today’s blog…