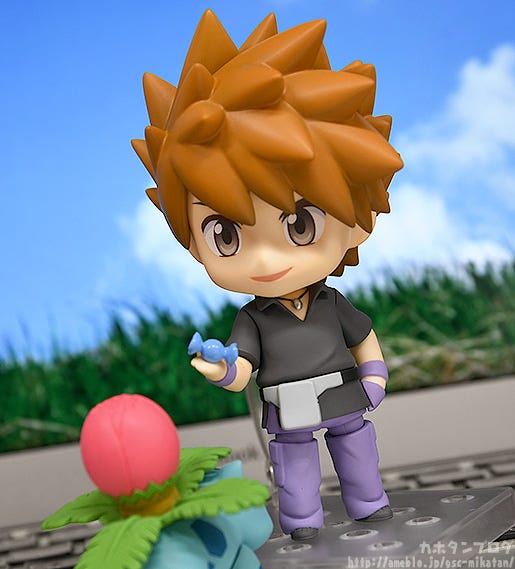 I’m a bit worried about autumn allergies… I’ll have to buy more tissues! From the popular game series “Pokémon” comes a Nendoroid of main character Red’s rival, Green, in his outfit from “Pokémon FireRed / LeafGreen”! He comes with three face plates including his standard expression, a battle expression you see during Pokémon Battles as well as a cool smirking expression as though he’s looking down on his opponent.

Charmeleon, Wartortle and Ivysaur are all included along with a Poké Ball! Be sure to add the adorable Nendoroid Green to your collection! Smell ya later!

“I am the most powerful Trainer in the world!”

From the Pokémon series comes a Nendoroid of the main character’s rival Green. This Nendoroid features him in his somewhat fashionable outfit from “Pokémon FireRed / LeafGreen”! ▲The shining pendant around his neck is there too…!

His unique hairstyle has been carefully recreated from back to front! ヾ(o´∀｀o)ﾉ ▲Such a cool hairstyle! The way it spikes up looks really cool too.

He comes with three face plates including the standard expression shown above, along with a battle expression and a cool, yet smug smirking expression! (σ･∀･)σ ▲That smug look! This kind of smug expression gets on your nerves a little bit, doesn’t it? But he’s just so cool, I love it!

As for optional parts, he comes with a Pokéball, so have fun pairing it with his special hand parts! ヾ(･∀･)ﾉ ▲Ah, you see this pose a lot when he battles with Red! ♪

Next up…! As you may have noticed, this item comes with Ivysaur, Charmeleon and Wartortle as well! (｡･ω･)ﾉﾞ ▲Even in Nendoroid form, they’re all here! Incredible!

Not only is Nendoroid Green great on his own, but pair him with the already released Nendoroid Red for even more fun! ヽ(*´Д｀*)ﾉ