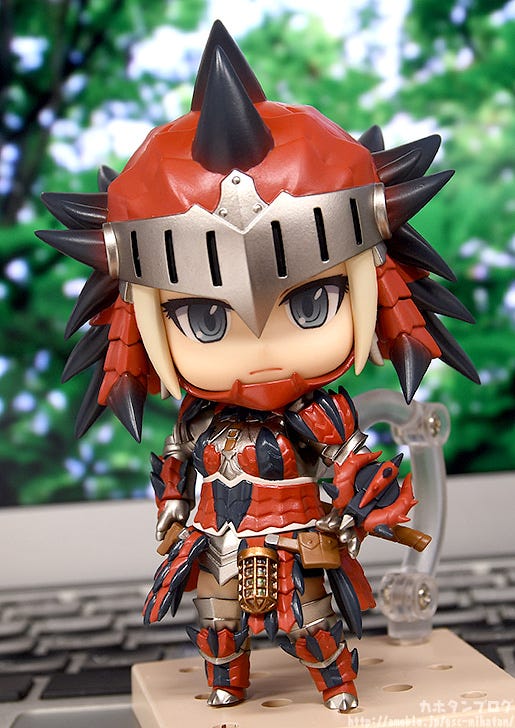 My favorite kind of salad chicken is smoked flavor. Even at the convenience store there’s just so many flavors… ( ‘༥’ ) From the PlayStation 4 game “MONSTER HUNTER: WORLD” comes a fully articulated Nendoroid of a female hunter in Rathalos armor!

She comes with two face plates including a confident standard expression and a brave battle expression! The Great Sword “Red Wing” and the hunter’s trusty carving knife are included as optional parts, allowing you to recreate all your favorite hunting poses!

One that has hunted the King of the Skies.

From MONSTER HUNTER: WORLD comes an adorable Nendoroid of the Female Hunter in Rathalos Armor!

The Nendoroid features joints in the arms, legs and ankles, making it fully articulated. Have fun recreating all of your favorite action poses from the game. (∩・∀・)∩

The armor made from the Fire Wyvern, Rathalos, has been carefully recreated in Nendoroid form. ◎ ▲The rugged Rathalos hide and metallic parts of the armor have been sculpted and painted with great care.

The carving knife at her waist is easily removable from its sheath. ☆

▲What a fun little feature!

You can also place it in her hand using the special hand part for holding the knife! ♪ As for other optional parts, the Great Sword “Red Wing” is inclulded as well! Put them together and you can recreate hunting poses like this with your Nendoroid! ◎

On the same day she goes up for preorders, the following item will also be available for preorder! From the PlayStation 4 game “MONSTER HUNTER: WORLD” comes a fully articulated Nendoroid of a female hunter in Rathalos armor! This special DX version includes all the parts that are included with the standard version together with bonus parts for even more display options!

She comes with two face plates including a confident standard expression and a brave battle expression! The Great Sword “Red Wing” and the hunter’s trusty carving knife are included as optional parts.

Additionally, the DX version comes with a replacement head part for displaying the hunter with a ponytail, Scoutflies, Slinger parts, monster footsteps, barbecued meat and a table and chair, allowing you to enjoy MONSTER HUNTER: WORLD even more!

One that has hunted the King of the Skies and conquered the world.

Scoutflies are also included, so your Hunter will be safe out in the wide, unknown world! ♪

Monster footsteps that attach to the stand are included as well! The indispensable tool for firing stones and nuts and for helping your Hunter easily get around, the Slinger is included, with more displayable parts in the DX Version. ★ Finally, barbecued meat and a table and seat are also included!

It’s probably a little hard to see the seat, so here it is from the side! ▲Using the support arm, you can pose her sitting down like this! ～♪

The DX Version includes all the parts that come with Nendoroid Hunter: Female Rathalos Armor Edition and more! ((っ’ω’)っ)) Please keep this in mind when preordering! ♪

The following item is currently in planning! Preorders for many products at the GOODSMILE ONLINE SHOP are closing soon! Here are the products closing 6th September 2018 (Thu) at 12:00JST!