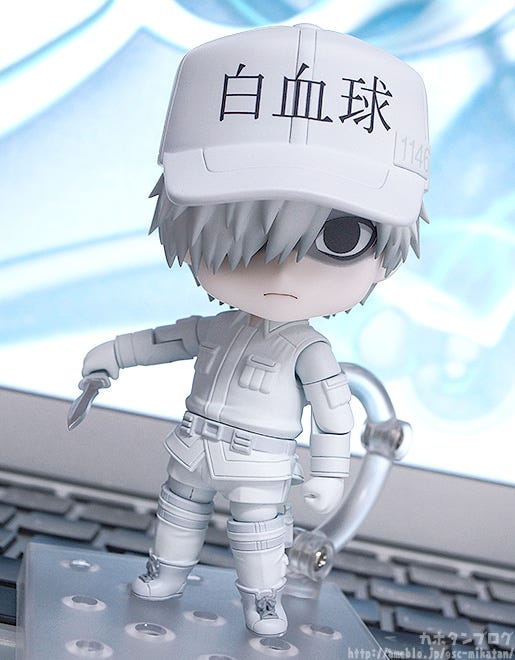 After watching Cells at Work! I have an all new onlook as to how my body works when I have hay fever! My cells are way more amazing than I thought! Today I’m going to be taking a look at… From the anime series “Cells at Work!” comes a Nendoroid of the cell that kills foreign bacteria and viruses in the body – the White Blood Cell! He comes with three face plates including a standard expression, a combat expression as well as a smiling expression. The body is articulated which allows him to be posed in various different poses.

Optional parts include his knife for combating the viruses as well as the receptor for locating the unwanted bacteria in the body. He also comes with a speech plate to display him saying his catch phrase from the series – “Bye bye, bacteria”. Be sure to add him to your collection and enjoy all sorts of cute situations in Nendoroid size!

From the anime series “Cells at Work!” comes a Nendoroid of the cell that kills foreign bacteria and viruses in the body – the White Blood Cell! More specifically White Blood Cell Neutrophil #U-1146!

He was first announced at WonFes and quickly became one of the most popular announcements of the day!! ▲ Even in Nendoroid size the details of his pockets and belt are lovely! ♪

His elbows are fitted with a joint allowing for some more dynamic poses to display him getting rid of any nasty bacteria! (っ’ω’)っ)) ▲ From the back you can see his receptor!

He also comes with interchangeable parts that allow him to be displayed with his receptor reacting! ((´д`●))三((●´д`)) He also comes with a bent let part allowing him to be posed as if moments before jumping in to erase some bacteria! ▲ If you cover up a part of his eye with the hat it gives a rather different impression!

He comes with a total of three face plates including his somewhat expressionless standard expression that can be seen above, as well as a combat expression for taking on the bacteria! He comes with alternate hand parts as well as effect parts for his knife to bring out the atmosphere of the series even more as the blood contrasts his white appearance! ( ´>ω<`) He also comes with a speech bubble part with his signature phrase “Bye bye, bacteria”! It comes with its own little stand allowing it to be displayed beside him in conjunction with any poses!! ε-(o´ω｀o)

Moving onto this third and final face plate… He comes with a smiling expression!!

This expression captures the unexpectedly friendly side of his character perfectly!! Displaying him waving his hand makes him look even more friendly! Seeing his rare smiling face makes me feel all happy inside!! ☆ ▲ The slight blush in his cheeks is also a nice touch!

Be sure to add this hard-working cell to your Nendoroid collection!
Nendoroid White Blood Cell!

You can find out more over on the product page! (｡･ω･)ﾉﾞ

In addition, orders from the GOODSMILE ONLINE SHOP will also include a Blood Stained Knife as a bonus part!! Preorders for many products at the GOODSMILE ONLINE SHOP are closing soon! Here are the products closing on the 9th August 2018 (JST)!