Nendoroid King (The Seven Deadly Sins: Revival of The Commandments) 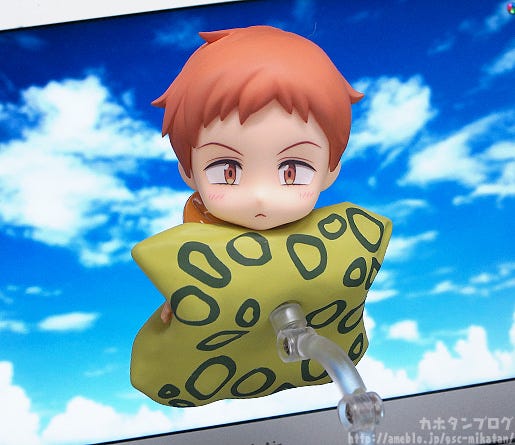 I have recently found myself wanting a beanbag chair even though they are said to make people lazy. Turning the air-con on full blast while sinking into a beanbag cushion would make for the perfect relax time! From the anime series “The Seven Deadly Sins: Revival of The Commandments” comes a Nendoroid of the kind-hearted Fairy King burdened with the sin of sloth – King! He comes with three face plates including a standard composed expression, a powerful combat expression as well as a listless expression.

Optional parts include the Spirit Spear Chastiefol in it’s standard Form One, spilt into five parts to recreate Form Five: Increase as well as in Form Ten, which is in the form of his cushion! The cushion is included in both a small and large version allowing for all sorts of different scenes from the series! Be sure to add the gentle Fairy King to your collection!

The member of the Seven Deadly Sins known as the Grizzly’s Sin of Sloth – King!

From “The Seven Deadly Sins: Revival of The Commandments” comes a Nendoroid of the kind-hearted Fairy King burdened with the sin of sloth – King!! His hoodie with the large buttons on the front has been faithfully captured in Nendoroid form! Optional parts include his Spirit Spear Chastiefol in Form One… ▲Each of the parts connects onto the special stand separately!

These spears look great when used in tandem with his combat expression, allowing you to easily display King in battle! ヽ(*´∀｀)ノ Plus Form Ten of the Spirit Spear Chastiefol is also included in a large form giving him a huge cushion to be displayed floating around on!! If you take a close look at the details of his mouth you’ll notice the smaller details of the sculpt of his lips and the teeth showing at the top!! So cute!!

The reverse side of the cushion is sculpted to fit King’s body in perfectly allowing him to be held in place nice and securely! (∩・∀・)∩ The head part is actually disconnected from the body and placed directly onto the cushion via a separate joint to really make it seem like he is buried in the cushion!! The above photo actually has the body and head separated, but it still looks rather natural even from the back!

He also comes with a smaller version to simply hold! (●‘∀‘●)ﾉ” The hand parts that allow him to be displayed tightly hugging the pillow are also included, and as you can see it also covers up his mouth which allows for all sorts of different situations! Keep your eyes on the Good Smile Company Site for details! ♪

In addition, orders of Nendoroid King from the GOODSMILE ONLINE SHOP will include a “Sin of Sloth” Special Round Base as a bonus! The WonHobby Site has recently been updated!!! ▼What is Wonder Festival?

Wonder Festival is the world’s biggest figure festival which takes place twice a year – once in Winter and once in Summer. The first Wonder Festival of 2018 is set to be held at the Makuhari Messe in Chiba, Japan on the 18th February 2018.

▼What is the WonHobby Booth?

Preorders for many products at the GOODSMILE ONLINE SHOP are closing soon!