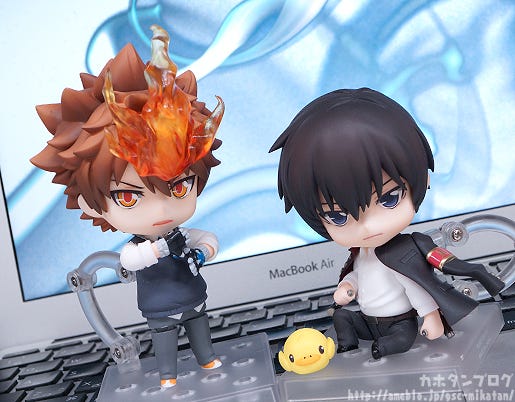 Kaho-tan here. ( @gsc_kahotan)  April will be over soon!

But don’t worry – we’ll have even more new figures coming your way in May! ～(∩・∀・)∩

Today we’ll be taking a look at two figures available for pre-order right now, from the manufacturer FREEing: ⇒Check out the info for each product here

Without further ado, let’s see what they have to offer! From the popular anime series “REBORN!” comes a Nendoroid of the 10th generation Vongola Family boss candidate, Tsunayoshi Sawada! He comes with three face plates including his standard smile that makes him look nothing like a mafia boss, a hyper expression to display him in Hyper Dying Will Mode as well as a lazy expression to display the more everyday side of his personality! Optional parts include Hyper Dying Will Mode effect parts and X-Gloves. You can display him making use of his famous moves such as Zero Point Breakthrough: Revised as well as X BURNER! Enjoy all the different sides of his personality – from the confident boss to his lazy everyday appearance – all in cute Nendoroid size! In addition, he also comes with a special Vongola Famiglia emblem background plate to display together with him! Be sure to display him together with the upcoming Nendoroid Kyoya Hibari!

And though he’s super-deformed, his trademark spiky hair has been meticulously recreated! ▲ That shirt tail hanging out in the back is just like Tsunayoshi… ! (・∀・)ｲｲ!!

His face plates include a sweetly smiling standard expression, which seems nothing like a mob boss whatsoever, as well as his hyper expression for Tsunayoshi needs to use his Hyper Dying Will Mode! ☆ You can recreate his Zero Point Breakthrough: Revised move by equipping his X-Gloves, Vongolia Family Necklace, and the Dying Will flame effect part that attaches to the front hair portion… A complete 180 from before, here stands a gallant Tsuyoshi – someone you’d expect to see as a confident mafia boss!

And his third face plate is… A good-for-nothing loser face that captures that side of Tsunayoshi with bad grades, bad luck, and an all around bad temperament that leads Tsuna to say “I can’t, I can’t” to just about anything ( ´>ω<`)

Pair together with the left or right bend arm to capture that wave of teeth rattling fear!

Last but not least!  He also comes with a Vongola Family Emblem Plate, together with a special stand! ヾ(o´∀｀o)ﾉ Prop it up behind any Nendoroid, to use as a background! And next up we have… From legendary TV anime “Reborn!” comes the Nendoroid you’ve been waiting for – lone wolf Vongola family guardian Kyoya Hibari!
In addition to his cool standard expression, he also comes with a menacing grin for his famous catchphrase “I’ll bite you to death,” and a yawning expression only one strict regarding sleep like Kyoya could pull off.
You can remove the school jacket draped over his shoulders!
Optional parts include his tonfas, partner (?) Hibird, and seated legs so you can enjoy putting him in a variety of situations.
Pair with Nendoroid Tsunayoshi Sawada (sold separately) for even more fun!

“Crowd me and I’ll bite you to death.”

Head of the Disciplinary Committee at Namimori Middle school, who keeps the worst of the unsavory characters in line – Kyoya Hibari in adorable little Nendoroid form!

His clear blue eyes, silky black hair, and school jacket draped over his shoulders have all been captured in great detail! When I first saw Hibari’s tonfa… They were like the coolest thing I’d ever seen!  (How long ago was that…)

His face plates include a calm and collected standard expression, a menacing grin that looks like he might just bite you to death, and a slightly bored looking yawning expression! ♪ ▲Looks just like him, nodding off in the reception room or on the roof in a classic everyday scene… !

But one thing you really don’t want to miss for this figure is the seated leg portion!

I’m personally a big fan of this seated position, where he has one knee raised – many thanks to FREEing for pulling it off… ! You can enjoy creating all kinds of situations with the many face plates and interchangeable arm parts!

And cute little Hibird is included, too!  You can perch him atop Hibari’s head, or wherever might suit your fancy! ♪ Don’t forget, if you pre-order either of these figures at the Goodsmile Online Shop, you’ll receive a Vongola Box & Hand as a special bonus!☆ Be sure to keep that in mind when placing your pre-order!

So why not add these cute little members of the Vongola Family to your collection!

* Available for pre-order at the Goodsmile Online Shop until 17th May (Thu) at 12pm JST.

* Available for pre-order at the Goodsmile Online Shop until 24th May (Fri) at 12pm JST.

These are also available for pre-order right now!★ The brand that makes products fans truly desire – With Fans!

Series from Bandai Namco Arts together with the craftsmanship of Good Smile Company, to give fans what they’ve long desired.  We aim to give both fans in Japan as well as all over the world products that capture their imagination.

Preorders for many products at the GOODSMILE ONLINE SHOP are closing soon! Here are the products closing on the 26th April 2018 (JST)!