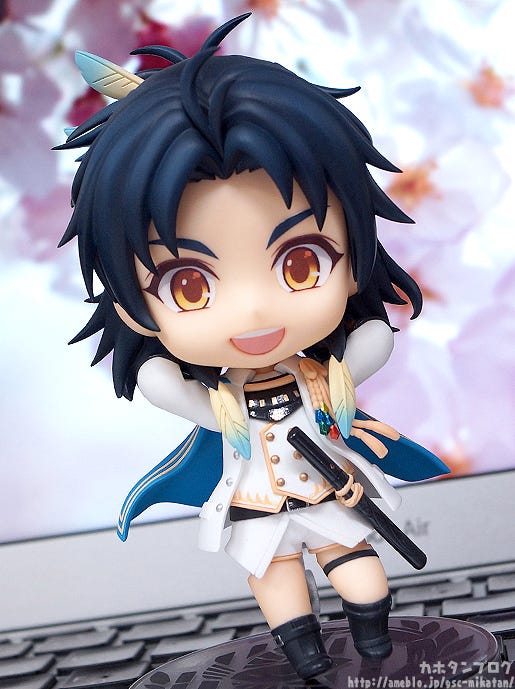 Kahotan ( @gsc_kahotan ) here!  And once upon a time I lived in Sendai City.

It’s been quite a while since I was last there, so I’ve been meaning to go back… ! From the popular browser and smartphone game “Touken Ranbu -ONLINE-” comes a Nendoroid of Taikogane Sadamune, the trendy sword that likes to do everything in style! He comes with three face plates including a standard expression, a combat expression and a smiling expression based on the line “Awesome. I’m all charged up!”.

His sword can be displayed both sheathed or drawn and his haori coat includes a joint allowing you to display him in various different situations. Be sure to add him to your collection and display him with the previously released Nendoroid Shokudaikiri Mitsutada who is also being rereleased at the same time!

An opportunity like this comes once in a lifetime.  Let’s do this in style!

You might have seen him on yesterday’s live webcast, but let’s take another look here on the blog!

He may be SD, but his lively expression, white costume, unique hairstyle, and other defining aspects of his character have all been captured perfectly! Even the back of his head has been sculpted in great detail! (●‘∀‘●)ﾉ”

You may have noticed, but his cape is actually split into 2 parts, each with its own specialized joint, so you can make it flutter to the left or right depending on his pose!

In addition to his standard expression seen above, he also comes with a brave battle expression for that once in a lifetime fight. ▲Completely different from that bright and cheerful disposition from before, but no less charming… !

And the 3rd face you’ve been so patiently waiting for is the deliciously ironic smiling expression!

(I want to protect… I mean be protected by that smile!)

It’s almost a slightly bashful expression, but strangely puts my mind at ease… !  Like his big heart could take on and conquer anything… !  (Maybe that’s just me…)

So let me say once again… As we announced the other day, Nendoroid Shokudaikiri Mitsutada will be re-released at the same time★ You could enjoy them on their own, but they’re even better together ( ･ㅂ･)و ̑̑

Just like the other Touken Danshi, Sada-chan comes with a special base for his stand ε-(o´ω｀o) What could be better suited for the Touken Danshi that likes to do things with style? will be available for pre-order from (Fri) 13th April! Something to consider when making your pre-order!

But that’s not all!  These will be available for pre-order at the same time, too! If he isn’t part of your collection yet, don’t miss out on this opportunity! ♪

Preorders for many products at the GOODSMILE ONLINE SHOP are closing soon! Here are the products closing on the 19th April  2018 (JST)!