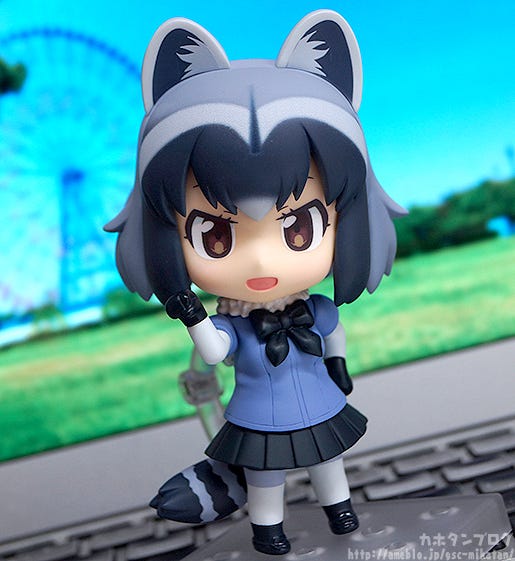 Today I’m going to be taking a look at…
Nendoroid Common Raccoon!★ From the popular anime series “Kemono Friends” comes a Nendoroid of “Arai-san”, the common raccoon! She comes with three face plates including a confident smiling face, a searching expression for when she is desperately searching about as well as a despondent expression!

A large selection of hand and arm parts are included to capture her various poses from the series, and she also comes with her “treasure”, Kaban-chan’s hat! Be sure to display her together with the other Nendoroid friends from the series, including the upcoming Nendoroid Fennec Fox!

An adorable Nendoroid of the easily flustered Common Racoon from Kemono Friends! Her fluffy ears and tail as well as her cute outfit with a large ribbon on the front have all been faithfully converted into Nendoroid size! ♡ ▲ The fluffy part around her collar and her soft looking hair! ε-(o´ω｀o)

Her tail is also fitted with a joint so it can be wagged left and right! ♪

▲ Simply move it around to match your pose!

She also comes with bent and straight arms, clenched and open hands and more for a variety of different posing options! You can recreate your favorite scenes from the series and also create your own original situations! She comes with three face plates, the first of which is the smiling expression above, and the second is a searching expression to display her desperately looking for her “treasure”! ★ This really brings back memories from the series of her asking various friends about the hat thief! The tight eyebrows really capture just how serious this is to her! She also comes with a pointing hand which can be used for a strangely self-confident looking expression! ( ´>ω<`)

Last but not least, her third face plate is this despondent expression! I want to pet her and make it better!!

This expression with a wistful, uncertain look captures her so perfectly! In addition, she also comes with her “treasure”! Her treasure known as Kaban-chan’s hat!

This is perfect for displaying her with the previously released Nendoroid Kaban-chan! The hat is also the perfect size to place on the Lucky Beast that was included with Nendoroid Serval! (っ’ω’)っ)) ▲ The hat is smaller than the one included with the actual Nendoroid Kaban!

Be sure to add the scampering friend to your collection!

She’ll be up for preorder from the 12th April!★

In addition, preorders from the GOODSMILE ONLINE SHOP will include… Perfect to display her explaining her treasure to the other friends! ♪

We also have another Nendoroid coming to join her very shortly…
Nendoroid Fennec Fox!